Early morning on May 31, 2014, San Pedro Necta, Guatemala, experienced a devastating mudslide after consecutive days of torrential rain. A landslide claimed the lives of five people. Military rescuers worked tirelessly for hours, excavating to locate missing and trapped persons, but what they never imagined is that 18 hours after the natural disaster occurred, they would rescue a dog buried alive. 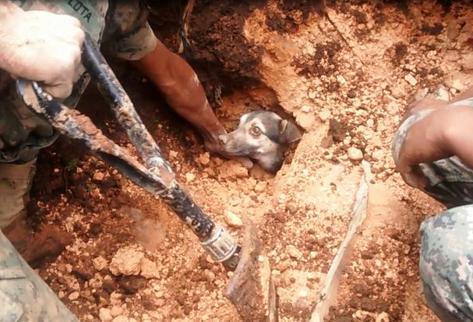 Local authorities said more than 86 homes sustained damages from the landslide. They also classified other areas close by prone to experience a similar disaster. In response to this tragedy, the government sent its military forces to aide with the rescue mission, and it was a group of soldiers who successfully rescued the trapped pet.

While the hero rescuers excavated an area they overheard the cries of a dog. They started digging where the sounds were coming from, and soon enough they found the dog.

In the video you could hear that the soldiers were concerned with the life of the animal. One of the heroes was a bit hesitant, thinking the pet in distress would bite him, but you can hear another soldier reassuring the first that the dog would not turn violent.

“He won’t bite you because you are helping him,” said the rescuer.

Once the soldiers dug an area large enough for the dog’s head to move freely, the pet crawled to freedom.

The canine lost his owners in the landslide, but he found his guardian angels and hero rescuers in the compassionate soldiers.