In the United States, a dog has chewed off her own leg after being tied up with no food or drink in the cold.

Zoe is a German Shepherd who was seen in a New York backyard by a delivery driver last Thursday. At first, he thought she was shot and he didn’t get an answer when he knocked on the door. That is when he called the Susquehanna Society for the Prevention of Cruelty to Animals (SPCA).

Zoe needed immediate attention from a veterinarian and they found bones in her stomach. It is thought that she was in such chronic pain that she decided to chew her own leg off.

Not only was Zoe missing her front leg, but she was also anemic and was diagnosed with a heart murmur. At first, they thought that she had cancer but the large tumor they felt on her shoulder was determined to be benign.

Even though it wasn’t cancerous, the tumor still needed to be removed in an operation that was described as being ‘palliative and dangerous’. Considering the other health conditions that Zoe was dealing with, there was an increased risk.

Carl Pritchard is Zoe’s former owner and has been charged with animal cruelty offenses by the New York State Police. 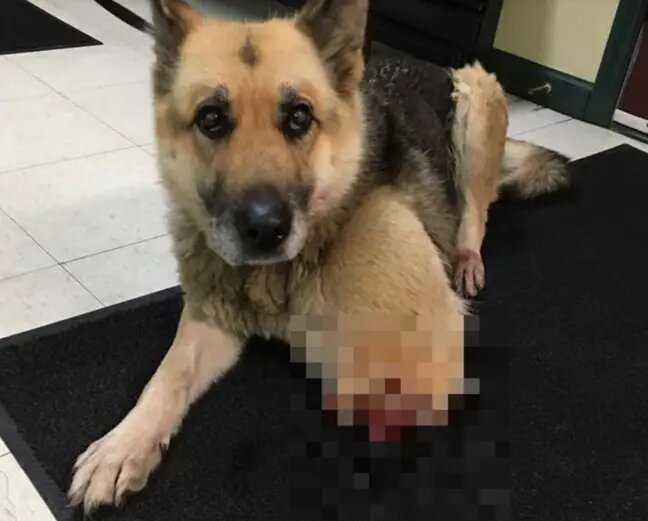 The state police posted a picture on Facebook and included the caption: “This is Zoe, she was found last week missing her left limb. Veterinarians in Otsego County believe she chewed off her own arm [sic], she was found with no food and water, living outside in a plastic pet crate with hay inside.

“Zoe was cared for by the Susquehanna SPCA, veterinarians in Otsego County and is now at the Cornell University College of Veterinary Medicine.”

A post was made by the Susquehanna SPCA that highlighted the cruelty some animals face and how doing the right thing can make a difference.

The post read: “We share these graphic photos and her story because we want to highlight the very sad fact that animals like Zoe are in our communities suffering and we need your help to combat the inhumane treatment of animals.

“The good Samaritan who called this situation was outraged and scared for Zoe. They did exactly the right thing by calling our line and we want to praise them for their heroic act.

“This is an example of how when folks who care come together, we can make a difference. This rescue is one of the many worthy ways in which your donations are making a difference. If you can consider a contribution to help us offset the expense of Zoe’s medical treatment, it would be greatly appreciated. Donations can be made on their website.