Donna Mortlock, 50, and her family were heartbroken when their Jack Russell terrier, BJ, passed away just before his 19th birthday. Though he lived a long, full and happy life, they felt his absence over the Christmas holiday, their first without him in nearly two decades. 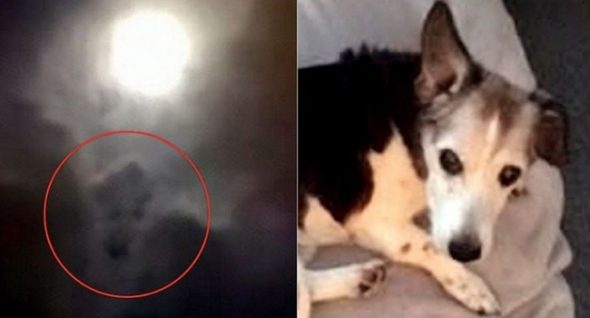 Four days after, however, Mortlock says she spotted her late pup in a photo she snapped of a silvery full moon in the backyard of her UK home in Welling, Kent.

“My youngest son came running out into the garden and we looked for the image but couldn’t see anything; it was in the picture,” she added.

Mortlock, a teaching assistant, told reporters the image freaked them all out a bit. Her husband, Colin, put it up on Facebook, where it quickly went viral.

“I have gone through in my mind whether it was BJ from beyond the grave,” she mused. “It would be a nice thing. And it was nice to have that memory back. He was well loved.”

Though BJ will never be forgotten, the family now has a new dog to love: a Jack Russell pup named Taz. He is seven months old.