Hospitality workers worldwide may have some competition building in their ranks. And, spoiler alert, it’s not robots they need to be worried about!

We’re kidding, sorta, but really, who among you (and we realize we’re reporting to a very biased audience!) wouldn’t want to check in at a hotel where the concierge is a doggo!? 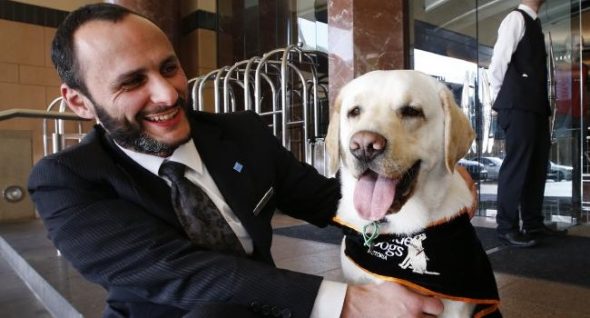 Back in April, the Hilton Milwaukee Center made news when they “hired” Millie, a 7-month-old mini goldendoodle as their newest concierge! Millie works alongside her owner, concierge Rusty Dahler.

“People have said it’s a great idea to have a dog in a hotel. She’s really changed the atmosphere,” Dahler told the Journal Sentinel.

Millie loves her job greeting the guests and she keeps them smiling — and she offers stress relief to her fellow hotel employees, as well. Millie even has her own business cards.

Dahler says she’s a wonderful ambassador for the Hilton brand and her naturally mellow demeanor, combined with regular training sessions at the hotel twice a month, keep her people skills in top-notch condition.

The idea of a dog concierge was new at the time, Dahler said, but Millie’s proven so popular she now has her own Instagram account with 2,700+ followers!

“We’re learning as we go, because we don’t have a lot of role models,” Dahler said. “There are hotels that have dogs in them, but they’re usually not large hotels like ours. I’m lucky I have a supportive general manager.”

The idea may be catching on, too!

Melbourne’s Park Hyatt in Australia has recruited its first-ever canine ambassador, too; he’s a beautiful, stocky yellow Lab. And his name is Mr. Walker.

Formerly a guide dog with Guide Dogs Victoria, Mr. Walker is 18 months old and joined the Hyatt ranks this past summer. Like Millie, his duties include greeting the guests. He also takes a personal interest in their stays and will enjoy walks around the park and gardens in their company.

He also gets perks we imagine most other employees don’t, like his fancy, custom, Tasmanian oak bed (on which it’s perfectly okay to lounge during office hours).

We don’t imagine his colleagues get too jealous, though!

Hotel manager Brett Sweetman told the Herald Sun he was delighted to welcome Mr. Walker on board. His original position was to provide assistance with Guide Dogs Victoria, but Hyatt quickly recognized his big, sunny personality demanded a higher-profile position and he was promoted to concierge.

“We are very proud to be able to count Walker as part of family, and confident that he will make everyone feel at home here at Park Hyatt Melbourne,” he said.