One look at Squish’s face explains the reason behind his name — but when he was picked up as a stray by animal control in April 2016 and brought to Cuyahoga County Animal Shelter, he was named Zar. 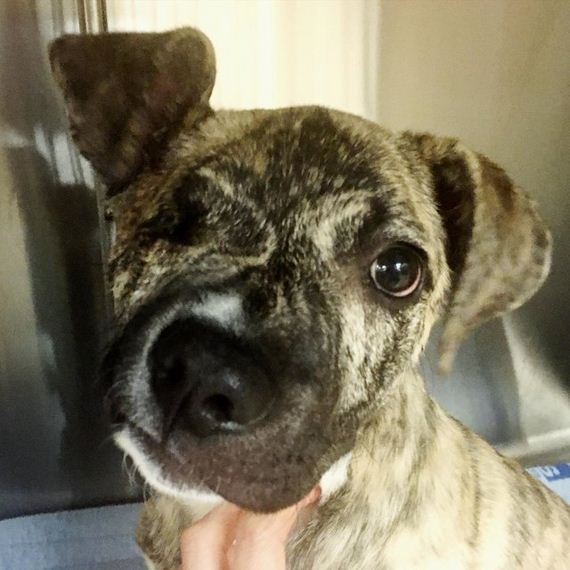 Thought to be around 4 months old, an examination by the shelter veterinarian revealed severe swelling and deformities in the right side of his head and jaw — causing his face to look squashed. He was barely able to open his jaw or get his tongue between his teeth, yet he still tried to give kisses to everyone he met. The veterinarian believed he was suffering from an infection, possibly brought on by an animal bite. He was prescribed antibiotics and pain medication and placed in medical foster care.

Initially Squish improved, as the swelling seemed to subside. But as his body grew, his face became sunken and his ability to open his jaw lessened more and more. He began to lose weight and, by June, the decision was made to euthanize him to prevent further suffering. 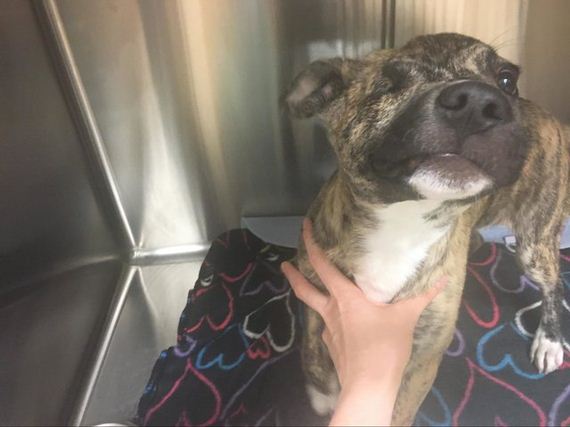 But that didn’t end up happening, of course. The shelter vet decided to bring him to VCA Great Lakes Veterinary Specialists for a second opinion prior to euthanasia. He was evaluated by a team made up of specialists including Dr. Eileen Heldmann, Dr. Katie Frantz and Dr. Emily Conway. Skull radiographs were taken and the sweet, crooked-faced puppy was given a CT scan. The results were shocking.

Squish had significant fractures to his skull and right upper jaw. Although his right eye was intact, it had sunk behind the crushed bones meant to support the eye. He had a massive amount of scar tissue around his jawbone. The scar tissue had prevented his jaw from growing along with his body, making it harder and harder to open his mouth. 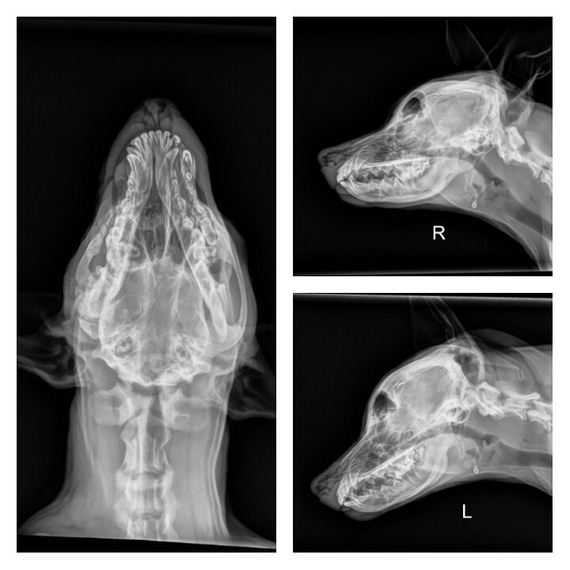 The three specialists shuddered at the realization that, due to the specific nature of his injuries, Squish had suffered blunt force directly to his head. He had no other trauma to his body, leading the specialists to conclude his injuries were caused intentionally — by someone using an object against his head.

The veterinarians felt Squish would need extensive jaw surgeries and ongoing treatment but, even with that, it was uncertain if he would regain enough function of his jaw to chew food. The likelihood of finding a potential adopter who was prepared to take on the cost and constant care of treatment without knowing if he would even survive was slim. Sadly, the shelter kept him on the euthanasia list.

But he never made it back to the shelter. Dr. Danielle Boyd was working at at the hospital as part of her ophthalmologic veterinary internship when Dr. Conway asked her to get a dog named Zar for an examination. The twisted face staring at her with one big, brown eye mesmerized her. As she carried him to the examination table, he melted into her arms. “I was enamored by this little one-eyed pup who clearly endured so much pain,” Boyd told The Dodo. She was amazed because he acted like any other happy-go-lucky pup.

Boyd decided to bring him home that night, just to give him a break from all the kennels and cages. “He watched out the window of my car as the world blurred by, wagging his tail, [and] looked as if he was smiling!” Boyd said. Once home, the shy and mellow puppy became what Boyd referred to as a “living, breathing puppy tornado.” 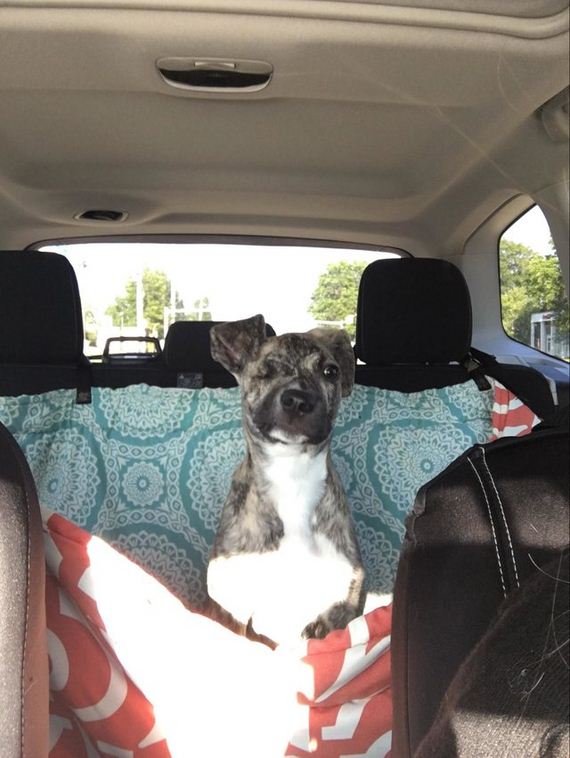 As soon as they got into bed that night, he went right to sleep in Boyd’s arms. But Boyd didn’t sleep. She was thinking this was the last night Zar would be sleeping in someone’s arms. She didn’t want to face that this was the last time Zar would get to run around someone’s yard. In fact, it was possible this was the first time he ever got to do both those things as well. By morning, Boyd decided she couldn’t let the brindle puppy curled up in her arms be euthanized. “In that moment, Zar became my little Squish,” she said.

All of this was happening one week before Boyd was supposed to move to Texas to finish her veterinary residency. She grappled with the idea of taking on a dog facing multiple, expensive surgeries, ongoing care and an unknown prognosis, and it frustrated her because she wanted to help him. She didn’t want to let him down as he had been let down his entire, short life.

The specialists at Boyd’s job weren’t going to let Squish down, either. Dr. Heldmann, the surgeon who evaluated Squish when he came to VCA, came up with a plan to give the little dog who had been on the euthanasia list for far too long some immediate relief. Dr. Heldmann removed part of Squish’s lower jaw and the scar tissue that prevented him from opening his mouth. She essentially freed his lower jaw from his upper jaw. He was able to open his mouth immediately after surgery. 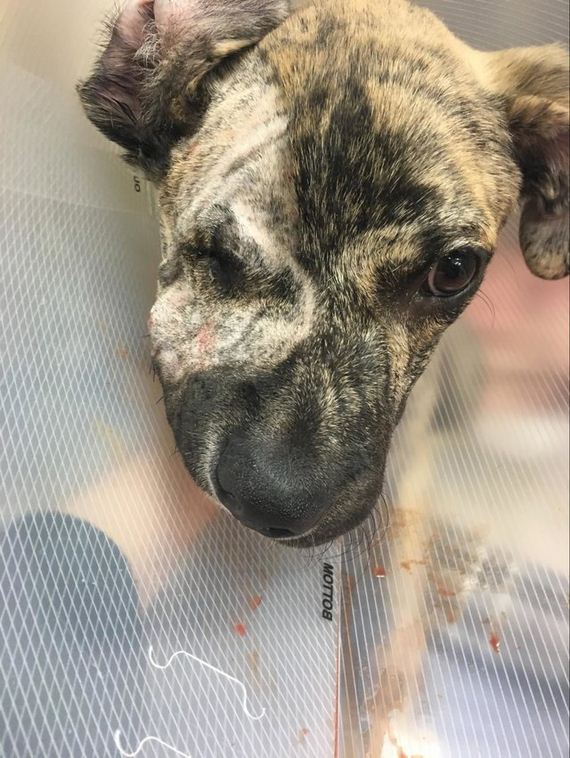 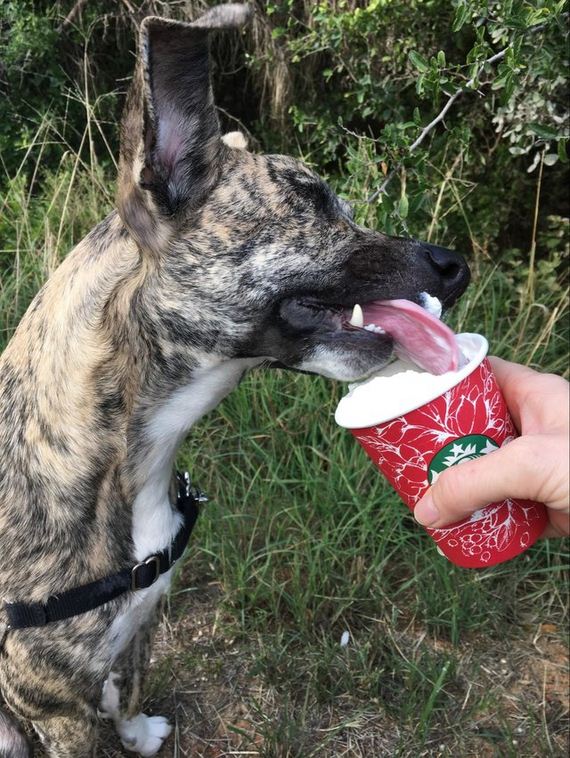 Less than 36 hours after Squish’s surgery, human and pup made the long drive from Ohio to Texas. “He never once complained or gave the impression that he had just underwent surgery,” she said. “We both loved every minute of the drive that became the beginning of our many adventures together.”

Surgery had to be performed again in August 2016, because Squish’s jaw began closing again. Dr. Fred Williams, Jr., of South Texas Veterinary Specialists and Dr. Lynsey Wagner of South Texas Veterinary Ophthalmology removed additional pieces of Squish’s lower jawbone and his eye. The only other surgery Squish has needed since then was a dental extraction of a tooth that had been grinding against another tooth due to his jaw not lining up correctly. 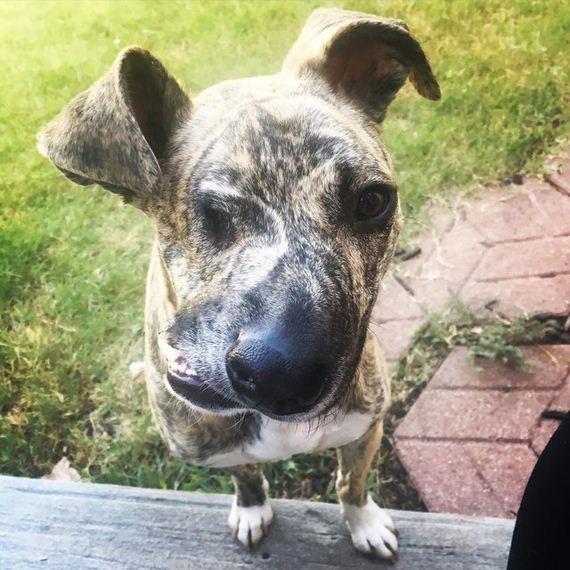 Squish can now pick up the tennis balls he loves instead of just pouncing on them like a cat. “I cried seeing his excitement as he picked up a tennis ball for the first time, and that was only the beginning of his little victories,” Boyd said. He prefers hard food, too. 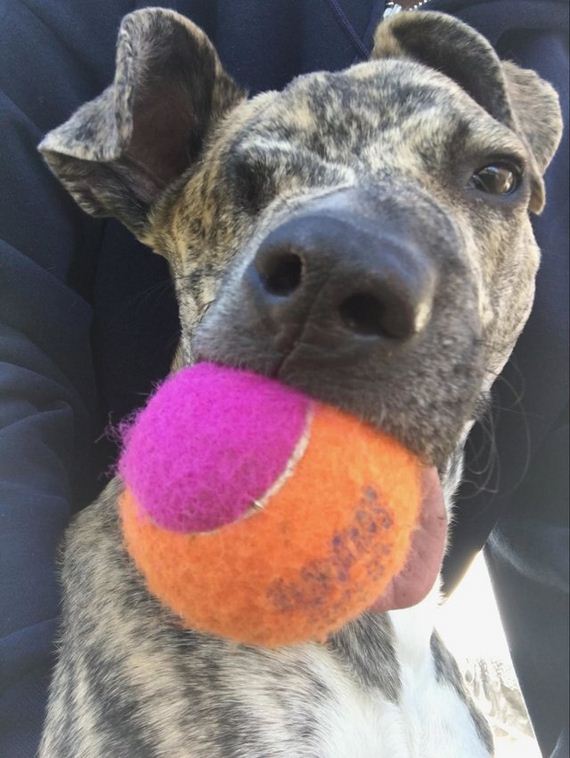 These days, Squish spends his time being the mascot for the veterinary hospital where Boyd works. “Employees come visit him in my office when they need a little Squish love,” Boyd said. Squish also shows clients whose pets are facing eye removal surgery how happy he is with one eye. 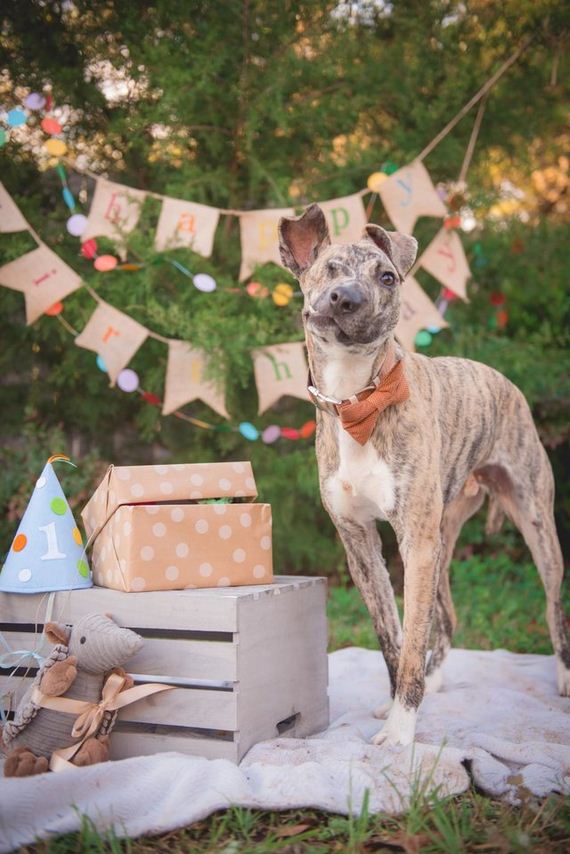 Squish’s life, once scheduled to end due to his disability, is full now. He loves sticks and dirty water, hiking and smelling flowers. Boyd has since learned that Squish arrived at the shelter the same week she said goodbye to her 14-year-old heart and soul dog. She had been grieving terribly and now says not only did Squish need her, she needed him just as much. 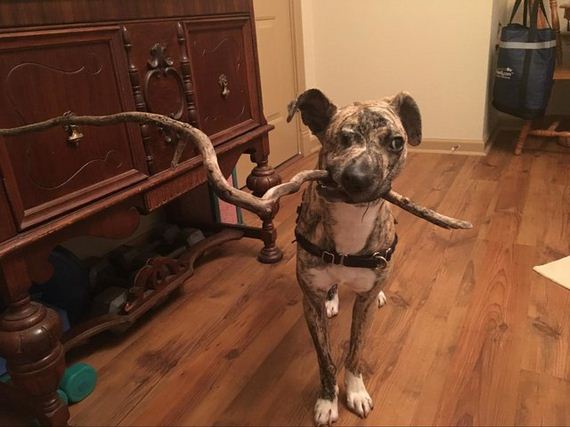 “I would not have this incredible dog without the amazing veterinarians and veterinary technicians that made it possible for him to undergo successful surgeries,” Boyd said. “I am forever grateful to all that fought for him and allowed me to be so very lucky to call him mine.”

The future that once looked so bleak for this crooked-faced pup now includes starting classes to become a certified therapy dog. “He loves kids and I want him to make them smile and show them how well he does with his disabilities and that it’s okay to be different,” Boyd explained.