Ghost was rescued at three months of age, a homeless pup in Florida. Deaf, with white fur and brown eyes, it wasn’t long before he was deemed “unadoptable.” Ghost has a combination of traits that can be lethal for rescue dogs — his high energy levels, occasional indifference to people and special needs made him a challenging case.

A dog deemed “unadoptable” — will become the first-ever deaf K-9 in Washington state. Young 'Ghost' was scheduled to be euthanized. Here in Washington, he’s found his forever home, helping to serve our community. kiro.tv/2t6LI8J

He was scheduled for euthanization, but the folks at Swamp Haven rescue in St. Augustine, FL, thought Ghost deserved a second chance. Reaching out to rescues around the nation, they hit a bulls-eye all the way out in the Pacific Northwest: Washington’s Olympic Peninsula Humane Society in Port Angeles was willing to take Ghost in.

They knew precisely the person who could help.

Barb Davenport, who began training dogs when she was just 10 years old, has become a beacon for area rescues with troubled pups. After learning much about showing dogs as a young lady, she enlisted in the Army, intent on becoming a K-9 handler, which she has been since 1979. 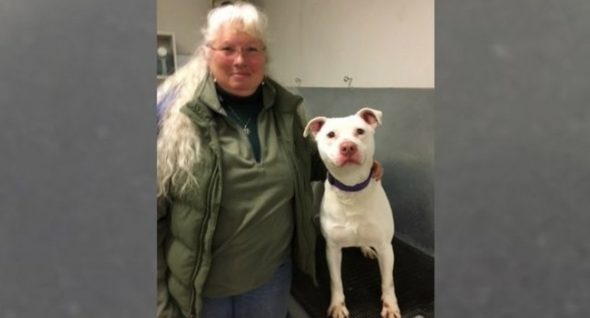 Davenport finds great satisfaction in taking dogs who can’t find forever homes and making them valuable in the community. To date, she has trained more than 450 rescue dogs, turning each into a working narcotics K-9. All of the Washington State Department of Corrections’ K-9s were originally from shelters.

She knew Ghost had potential.

“He was very focused and determined to locate his ball when thrown or hidden,” Davenport told KIRO news. She felt he could be a good K-9.

These days, Ghost — now two-and-a-half — lives with his new handler, Joe Henderson. He’s training to become a narcotics detection dog with the DOC. Henderson is his forever-dad. And Ghost will earn the distinction of becoming the first-ever deaf K-9 in Washington state history.