A month after her owner deployed Kermie was taken to the vet because of her bad breath. The diagnosis wasn’t good, Kermie had cancer. She was only given two or three months to live, but Kermie had plans of her own. She refused to die until her owner returned home from his nine month deployment. 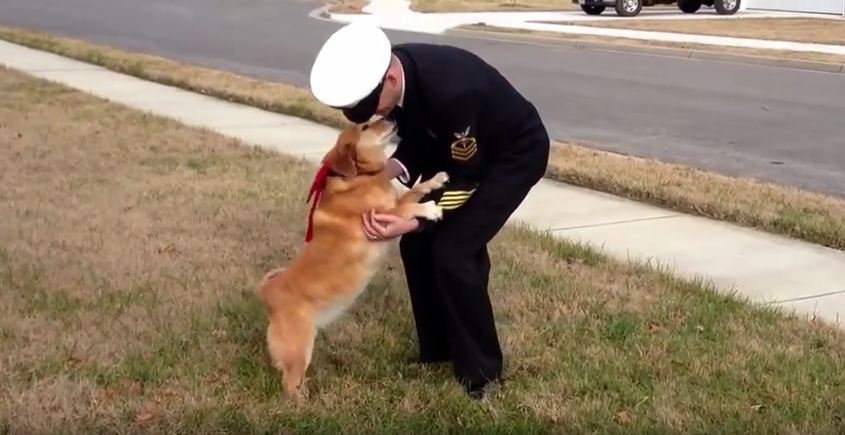 Last March Eric Ralston, a chief hospital corpsman in the US Navy, was deployed. A month after he deployed his wife took their dog Kermie, an 11-year-old Lab-Beagle-Chow Chow mix for a checkup when she noticed Kermie’s breath had become very foul.

After being examined it was discovered that Kermie had oral melanoma and the vets believes he had at most two or three months left to live. “We were devastated to say the least,” said Jennifer Ralston. “Kermie was our first child, and we did not think Eric would ever get to see her again.” Kermie wasn’t ready to say goodbye without seeing Eric though.

Three months passed and Kermie was still around and soon it was reaching towards the end of Eric’s employment and the family began to hope that maybe Kermie would get to see him again and welcome him home. They became determined themselves to help her see Eric one last time. When eating became difficult Jennifer prepared special meals and hand fed Kermie.

Then 12 days before Eric was supposed to return home his deployment was extended. The holidays were approaching and the Ralstons feared Kermie wouldn’t make it to Christmas when Eric would finally come home. Kermie continued to defy the odds though. A few days before Christmas Eric returned home and Kermie was there to welcome him. She sported a red bow and was caught on video sprinting from the house and into Eric’s arms.

Eric’s return brought new life into Kermie, before she had seem to be on her last leg but with him home she had new life. “His return was some sort of magic pill for her,” said Jennifer. “She began eating and drinking again, without struggle.” Kermie soon was celebrating her 12th birthday in January, but by February she made a turn for the worse. “When good days became good hours we knew it was time,” said Jennifer. On February 22nd Kermie lost her battle with cancer. Eric and the rest of her family were by her side.