David Foster is a busy man from the UK with a job that takes him all over the world, but first and foremost, he’s an animal lover. Although he enjoys the work he does, his real passion is bringing joy to shelter animals.

“All this travelling is boring, so I would go to local animal shelters wherever I may be and give a few toys or balls for their animals.”

Eventually, David’s family and friends began giving him dog toys to take along with him on his business trips, and his hobby eventually grew into his passion project, Play for Strays. He accepts donations of toys from his followers and personally delivers them to shelters all over the world. 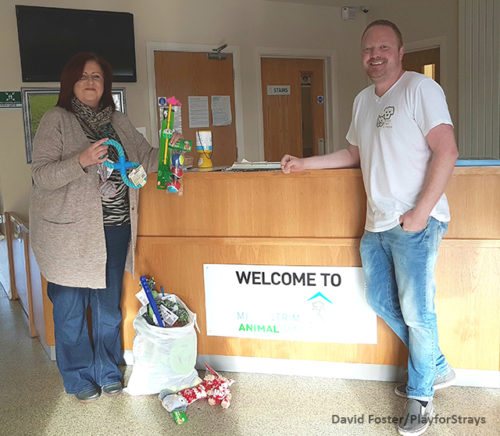 As busy as he is, David decided it was time for a vacation, and booked his “trip of a lifetime” to the Amazon. He had been looking forward to it for a long, long time, but he didn’t realize how much it would change his life.

David’s trip would take him through remote parts of the rainforests, away from civilization and into places people rarely step foot. It was in one of these lonely places that David saved a life.

“When we stopped at this random island, the plan was to go swimming and snorkeling, then have a lunch, idyllic really. Whilst on the boat, in the distance, I could see what I thought was some jagged bogwood. As I grabbed my binoculars to take a closer look, I could tell immediately that it was a dog. At this time Hugo, the boat owner, was playing with his new toy, a drone, and I told him a dog was there. He originally dismissed it as a dog from a local community or a farm and kept the drone hovering over the guys snorkeling.” 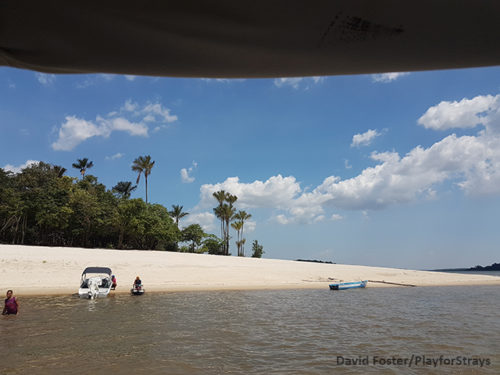 David knew that the dog couldn’t have wandered from some nearby community, and the owner of the boat confirmed it when he flew his drone higher –  there were no communities nearby at all.

“As the guys who were snorkeling came back on the rowboat Negrita plunged into the water, so I leapt off the boat and ran down to the beach where she came towards me. It was a pitiful sight and I’m surprised she had the energy to swim and run so far. On reaching me she cried, and I’ve no shame in admitting that I almost did too. Such a pitiful sight.”

Who knows how long it had been since she had last seen a human being. Although she managed to swim and run to David, the dog could hardly walk. It was nearly 100°F out that day. Poor Negrita had been severely neglected and abused. She was extremely thin, covered in fleas and ticks, and her ears were cut and sliced. David estimates she only had a day or two of life left in her when they found each other. She was so close to death that vultures had begun to pursue her, waiting for her to die. “No way could I leave her here to fend for herself, no way.” 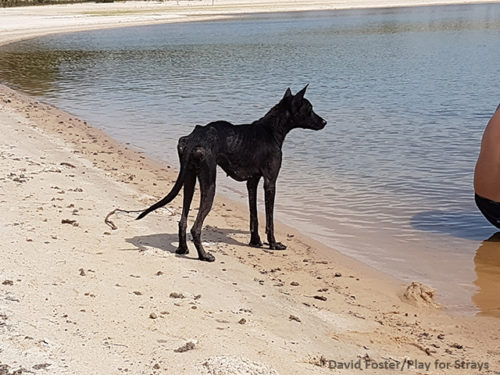 David and another member of the expedition took food out to her, and David was given permission by Hugo to feed her some steak and tie her up at the front of the boat so that he could take her for veterinary care in the next town, Nhamundá. Before they arrived, though, David learned that there would not be a suitable vet in that town, and decided to bring her along until proper medical care could be had.

“We docked at Nhamundá for dinner and I checked her below decks every 20 minutes or so. Then on one check she was gone, I had a moment of panic but she was right there on the beach. I jumped off the boat, gave a whistle and she came straight back. I tied her extra tight to the bemusement of the local fishermen who think I’m crazy.” 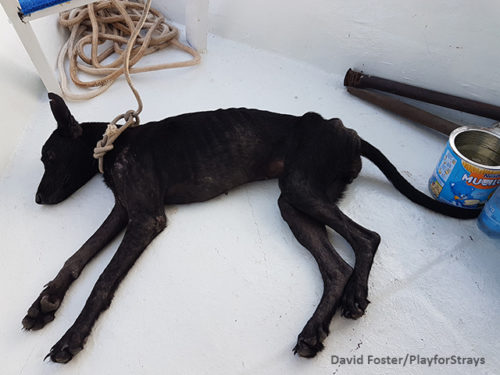 “As I went to bed, and ready to have a final check, she was gone again! Rope still attached, but she was gone. It was pitch black now and I had no way of finding her. So I set my alarm to go off before sunrise to go look for her.”

“Unbeknown to me the boat starts and leaves even earlier. I leapt out of my bunk to see the shore disappear into the distance.”

David was incredibly angry and eager to go back, but he wasn’t able to speak with the owner of the boat for an hour after he realized they were on the move. Hugo told David that they had come too far, but David begged and pleaded, and Hugo changed his mind on the condition that everyone else on the expedition agree to return. David even offered to pay for the cost of the fuel for the trip back.

When he finally made it back to where they had been the night before, he found Negrita waiting on the beach patiently, exactly where the boat had been docked.

“One quick whistle and she was in the boat, I didn’t even have to get out!” 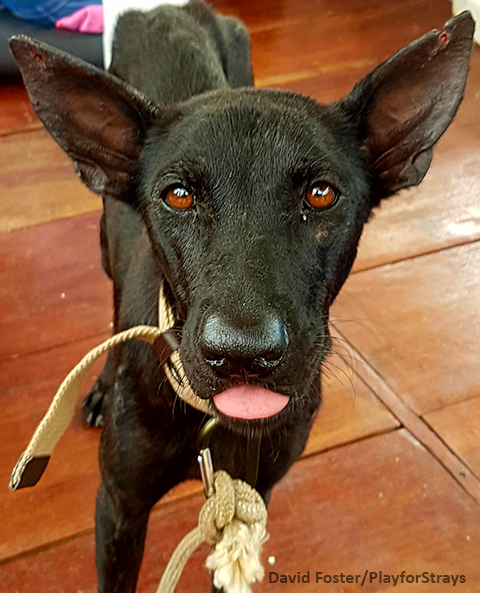 They rejoined the expedition and made their way onward to the next town, Oriximiniá. David was able to buy everything he needed to care for a dog, but was still unable to find a good vet. He bought medicated shampoo and parasite drops, and with the help of local children, bathed Negrita and picked off the ticks he could.

“We are still days away from a proper vet clinic in Santarém at this point. She seems a lot happier at this point but still very itchy and unwell.”

During all of this, David had made a serious decision. His heart had broken when he found the sickly little dog, but since he found her it was mending, and he had become dedicated to her well-being.

“I have decided to get her to the UK. Dogs are not loved here like we do in the UK. My heart wouldn’t allow her to stay.” 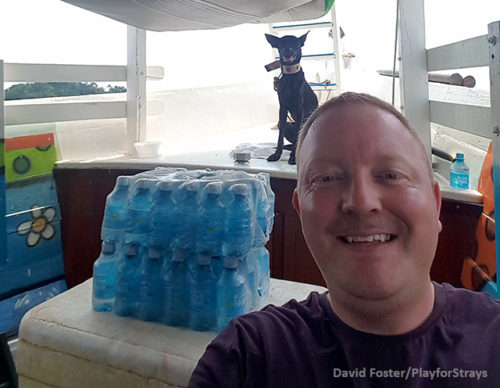 There were a few more hurdles to jump before she would be able to join him, though, the biggest being her health. She was finally able to see a veterinarian when the expedition reached the town of Santarém. The vet told David that tests would be run to determine whether she carried any diseases. “Her tests included canine leishmaniasis and cinomosis… I was warned that if she tested positive for leishmaniasis they would destroy her without hesitation.”

David waited for what he calls “The longest 24 hours of my life!” but Negrita’s test results came back negative!

David has since cut his trip-of-a-lifetime short, cancelling a second expedition through the Amazon for Negrita’s sake. Thanks to his work with Play For Strays, he was able to meet a good foster for her in Sao Paulo while he makes arrangements and goes through the long, bureaucratic process required to take her home. He’s not doing it alone, though. His followers have been extremely supportive, and have even helped raise funds to bring his “Amazon Girl” home. 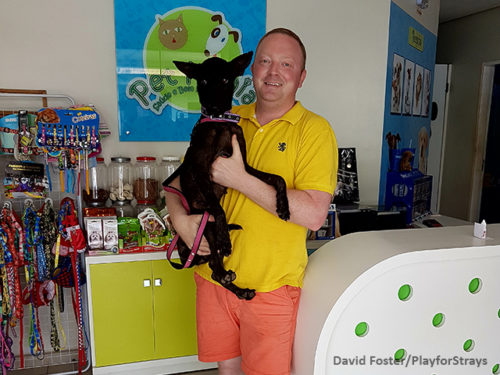 “Since my return many have asked me ‘why bother, there’s so many dogs here to save?’ My reply is that I’ve seen hundreds of dogs in shelters, but they are safe, fed and hopefully loved. Stray dogs in cities are also a prevalent sight, but they can potentially find food,” David says. “Negrita was beaten and left for dead in a place where she couldn’t survive, even if she tried. She wasn’t a stray, she was abandoned to die and chose me to save her. It may take time, but I will do it.”