Poor Boo! Apparently, his humans moved, and put him out to the curb with the trash that they left behind. He was found just lying on the discarded items, and almost seemed to be guarding the stuff just in case his humans came back. 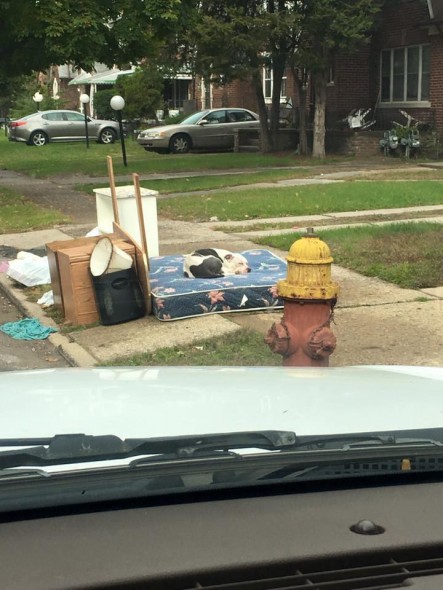 Facebook used Liz Marie was the one to come across Boo lying with the trash at the curb.  In her Facebook post, she describes how heartbroken she was just at the sight of him.  Her post came to the attention of Devin Oliver, the founder of the Detroit Youth and Dog Rescue.  He knew he had to go get him right away. 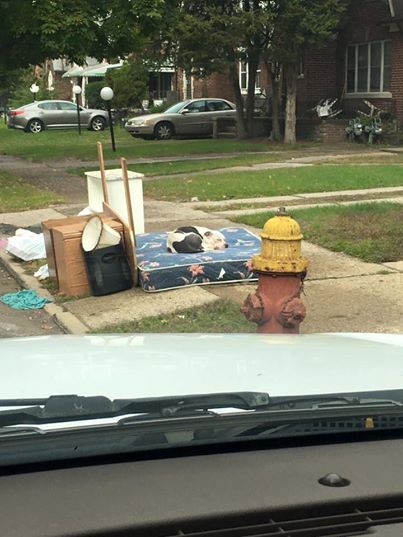 This picture absolutely breaks my heart, I am literally in tears. Meet Boo, this beautiful boy was left behind with the trash and belongings when the family moved out. He stayed right by their stuff and never left it, confused and lonely. He was rescued by Mike Diesel after a neighbor contacted him because Boo had been discarded outside for over a week. Mike spent 11 hours working to gain Boo’s trust so he could rescue him. He is being cared for by Mike and the Detroit Youth and Dog Rescue (which he founded). If anyone is interested in adopting him or donating to his care, contact detroityouthanddogrescue@gmail.com
Or call into Groesbeck Animal Hospital at 586-463-7387

It wasn’t easy.  Oliver took several days building trust with Boo before he could be rescued.  It was a lot of hard work, but it’s just what Oliver does.  Boo was eventually brought to a vet, and aside from being very hungry, thirsty, and understandably depressed, Boo was in good condition.

The whole rescue program is actually run through fosters, and does not have a physical address of its own.  Since 2014, Oliver and his team have been able to rescue and rehome about 75 dogs.  Boo has gotten some attention through social media, and some people have even called asking about him.  However, no one has stepped up yet.

If you think that Boo could be the dog for you, you can click here to be taken to the rescue’s website for more information.