The icy clutches of a Canadian lake didn’t keep an Alberta man from jumping into the freezing water to save his dog after it fell through the ice.

Tonight on CTV News at Six, St. Albert Fire has been dealing with an increase in ice rescues. Angela Jung was at an off-leash dog park in St. Albert when a dog fell through the ice and his owner jumped in the pond to rescue him.

“As soon as the ice broke, I just went right in…I think most people would do the same for their dog,” Duncan McIver told CTV. 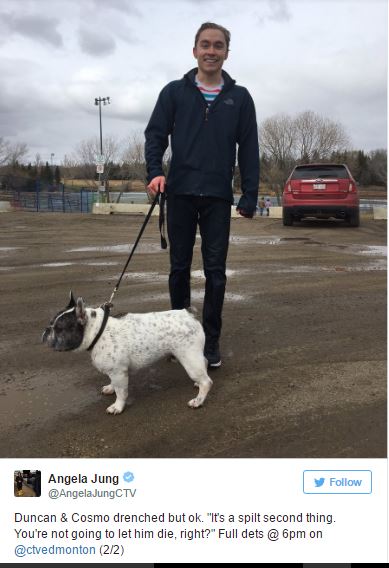 Interestingly, a TV crew had been on hand to shoot a story on the dangers of thin ice when stocky Cosmo took his polar-bear plunge. McIver jumped in to the rescue and they climbed to a concrete strip. Heading in toward shore, the ice broke again but they made it — wet, freezing, but safe.