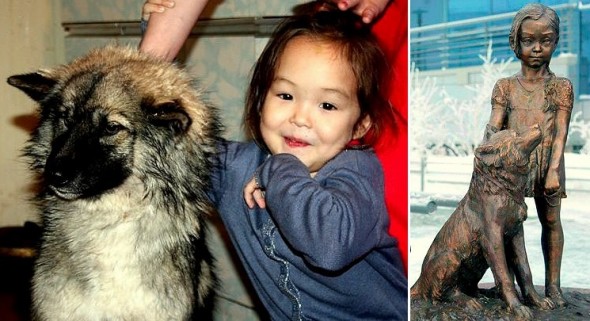 Last year we shared with you the story of Karina and her dog Naida, who dutifully protected her when she spent nearly two weeks lost in the vast wilderness of Siberia.  Naida only left the girl’s side to find people to come rescue them, and recently a statue was unveiled at the Yakutsk Airport dedicated to their perseverance.

On July 29th, 2014, Rodion Chikitova embarked on a trip to his native village.  Unbeknownst to him, his four-year-old daughter, Karina, followed him into the woods.  Their puppy, Naida, accompanied her.  Karina’s mother thought Rodion had brought her along, and it wasn’t until they spoke on the phone a few days later that their worst fears were realized.

Crews searched by air and land for five days with no trace of her.  Some of the men on the ground were even forced to fend off a bear.  Chances of finding the girl and pup alive in these conditions and 40-degree weather were becoming increasingly slim.  But after nine days, the dog returned to the girl’s village of Olom. 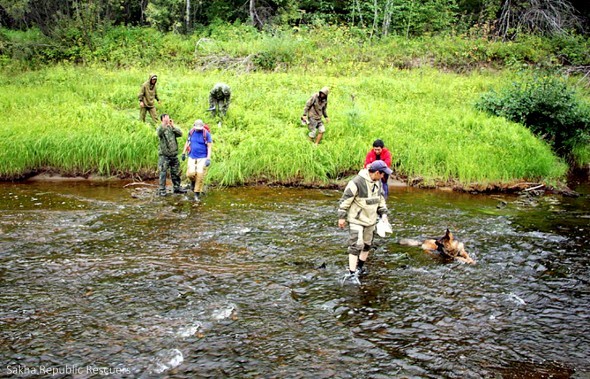 “Two days before we found Karina her puppy came back home.  That was the moment when our hearts sank, because we thought at least with her dog Karina had chances to survive –  night in Yakutia are cold and some areas have already gone into minus temperatures,” explained Afanasiy Nikolayev, spokesman for the Sakha Republic Rescue Service.

“If she was to hug her puppy, we thought, this would have given her a chance to stay warm during nights and survive.  So when her dog came back we thought ‘that’s it’ – even if she was alive – and chances were slim – now she would have definitely have lost all hopes.  Our hearts truly and deeply sank.” 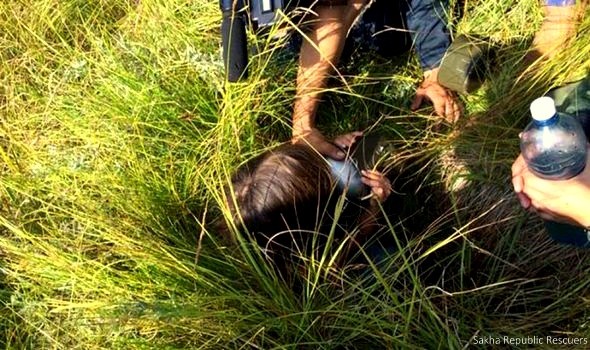 But the dog didn’t just return – he came to get people to find her.  He led rescuers exactly to her.  Karina had been hiding out in some tall grass, which is why she couldn’t be spotted from above.

“Suddenly with the dog’s help we saw Karina siting in the grass. We rushed to her, got her a little tea and grabbed her to run back to the car and doctors,” Nikolayev said.  “I carried Karina myself to the car, and she was light as a bird. She weighed hardly 10 kilograms (22 pounds) – but amazingly she was fully conscious.” 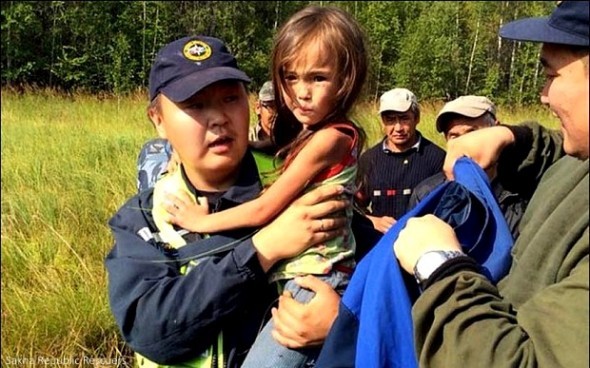 Miraculously, the scantily-clad girl only suffered from mosquito bites and a few scratches to her feet.  She told rescuers how she survived by eating berries and drinking water from streams.

“Certainly she went with grandmother and parents to the forest, to gather berries. Perhaps this is why she was not afraid of the forest,” said rescuer Albert Semyonov.  “Karina herself is a very strong girl, has a strong-willed character. This probably helped her to survive.” 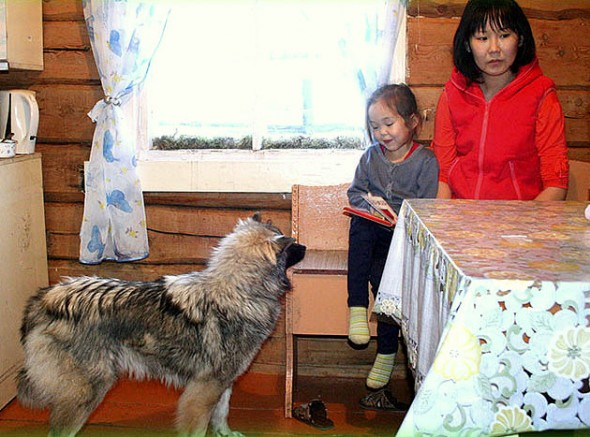 Karina’s grandmother, Emma, said that Karina’s first words to Naida when she returned were “Why did you leave me?”  But because of this wonderful dog, she survived and was found before anything bad could happen.  She made a complete recovery, and was for the most part unfazed by their sojourn.

Nikolay Chochchasov was inspired by the pair’s stoutheartedness, and created a bronze sculpture in their likenesses.  Karina recently celebrated her sixth birthday, around the same time the effigy was revealed by Yakutsk Airport’s general director, Nikolay Mestnikov. 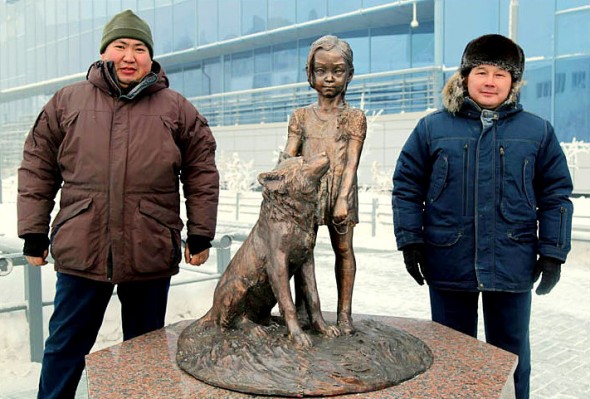