Dogs aren’t just our best friends – they’re very often great companions to cats, too.  As a useless human stood around recording for an unbearably long time as a poor kitty with its head stuck in a bag climbed around on the back of the guy’s truck, it was his wonderful dog who actually came to the rescue and gently took the bag off.

Poor cat.  While of course it’s funny to see our moggies – safe, warm, and well-fed indoors – get themselves into goofy predicaments, it’s clear that this one is quite distressed.  Who knows if it has a real home or even eats regularly, so foraging for food inside of a discarded pizza rolls bag seemed like a good idea.

“I walked outside and saw the cat with the bag on its head. I thought people might think it was funny, so I recorded it,” Kentuckian Jason Smith said, according to UPI. 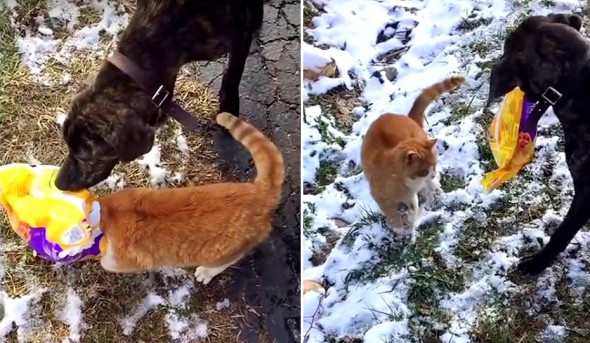 The man’s kids see what’s going on and start laughing, saying, “That’s hilarious, daddy!”  Real good parenting, buddy.  Dirtbag dad isn’t inclined to help, so, SPECTACULAR role model that he is, neither are the kids.

Once trapped, the cat could no longer see, and ambled around the back of the pick-up truck.  Without vision he was disoriented and he hesitated to jump out, especially hearing a dog whining nearby.  Eventually he opted to make the daring leap over the side, which was fortuitous, as the dog proved to be exactly the helper he needed.

Today’s lesson:  dogs are the most fantastic, marvelous creatures on the planet, and (some) people are just turds.