Marine Corps Sgt. Chris Willingham gave tribute to his fellow soldier by saying that she is the one reason he made it back to his family and cited how fortunate he was to serve in the military with her. These powerful words herald a military hero who is seemingly brave, protective and devoted. You might think that Sgt. Willingham is speaking about an officer but he isn’t. Rather, he is championing Lucca the German shepherd. Lucca’s story is heroic- as heroic as any human serving in the military. 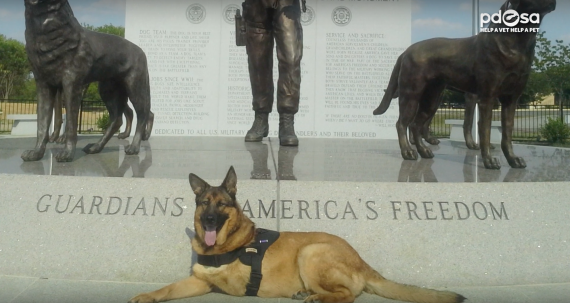 In 2012, Lucca was a six year veteran of bomb sniffing for the Marine Corps. She was stationed in Afghanistan and knew her job well: to protect her human troop. By this time in her military career she had already been successful on over 400 special missions throughout the much-conflicted Middle East. On this particular mission though, Lucca ended up losing her front leg due to a roadside improvised explosive device, or IED. Prior to the explosion, she located a storehouse of weapons hidden in a field and a different IED that was disarmed thanks to her alert. Now, four years later she is being recognized for years of service to the United States.

On April 5, 2016 Lucca received the Dickin Medal, which is the equivalent of the Victoria Cross for human soldiers. The Dickin Medal is the highest decoration awarded for heroism in the United Kingdom. Lucca joins a prestigious group of sixty-six dogs awarded this Medal of Honor and is the first United States Marine Corp. dog to receive this accolade. Through her gallant service she has made history. The Dickin Medal was created by Maria Dicken in 1943 and is the highest honor animals can receive with regards to military service. 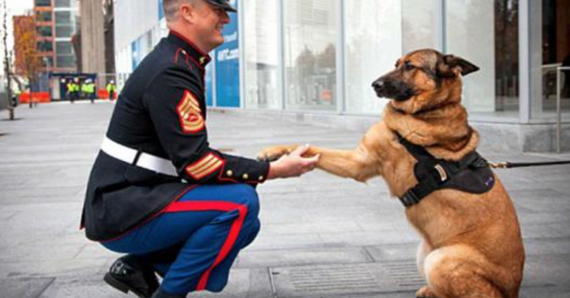 The award was presented to Lucca and her handler by the PDSA’s Director General Jan McLoughlin. Ms. McLoughlin stated “Lucca’s [obvious] gallantry and devotion” to her military service proves her worthy of this huge Medal of Honor. She also noted the ability to sniff out arms and explosives saved countless human soldiers from harm.

Her handler Sgt. Willingham noted that Lucca’s skills of searching for explosives saved the lives of thousands of troops. In fact, during her service there were no human casualties on her canine patrols. Another handler, Cpl. Juan Rodriguez stated that the disastrous explosion was fierce. When he saw it happen, he feared Lucca’s life was ended. He ran to aid the injured canine soldier reminding himself that she had protected his life numerous times in battle and now it was his turn to be there for her.

After the bomb’s detonation, Lucca was evacuated from her location and transferred to Germany for immediate treatment. She was then sent to Pendleton Marine Corps Base Camp to continue with her recovery. Her medical staff said she was up and walking 10 days after her surgery and her personality was not altered by the blast.

Four years after the blast, Lucca is now a war hero who is happily retired. She lives in California with her original handler Sgt. Willingham and his family. Although she is retired from the military, Lucca is still contributing to her world. She makes appearances at community events and in schools. Although her medal of honor is a high praise from the military and puts her in a category of animal hero, she seems content with hugs, cuddles and treats. She deserves them all.