When the world-renowned Vienna Chamber Orchestra was recently performing at the 31st International Izmir Festival in Çesme, Turkey, their concert was unexpectedly interrupted by a random dog. The canine walked on the stage, got the best seats, and made itself extra comfortable.

We see the doggie going towards one violinist, who continued playing to the best of his ability. Then the dog did what many of us wanted to do at some point in a classical music concert – that is, lay down and demonstratively yawn.

Apparently, many people in the audience could sympathize with the pooch, as they gave him a few rounds of applause. I mean, even the musicians found it funny and did their best not to laugh.

We don’t known where the dog came from, or if it has an owner, but one thing is for sure – its performance on stage was one to remember. Thanks for reminding us once again that humans don’t deserve canines, doggie.
Vienna Chamber Orchestra’s recent performance in Turkey was unexpectedly interrupted by a random dog 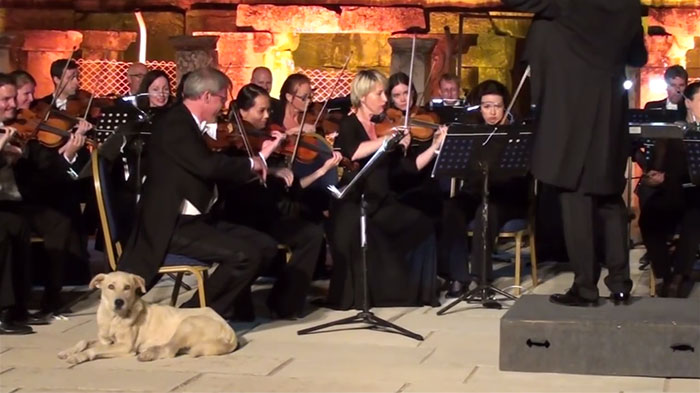 The doggie didn’t seem to be intimidated, rather he went on stage and took the best seats

Then, the four-legged fellow decided to make itself comfortable and lay down