What was 168 pounds, stands 6 feet tall and received a medal of valor for saving numerous lives? If your guess was “A husky black and white Newfoundland”, you’d be right! Meet Whizz- he was a huge flurry friend that became the epitome of the term “gentle giant” throughout the south coast. Whizz patrolled the waters fearlessly. He was trained as a rescue dog for the marines and for the past decade or so he vigilantly kept hundreds of swimmers safe. 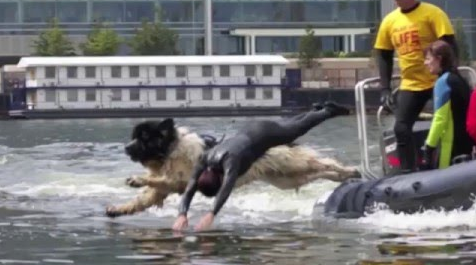 Thanks to the PDSA Whizz posthumously received their Order of Merit, which is given to animals who have displayed honorable devotion to society, their community or their owners. Whizz did all three. His service lifespan was just over ten years as a rescue dog. He passed away on March 1st of this year.

What made Whizz so good at his job? The answer to this one is: nature. Whizz was a Newfoundland dog, which in itself made him capable of amazing feats. Imagine having 168 pounds of dog covered in huge amounts of furry goodness. His handlers had to give him something to do. In the end, all they did was let nature take its course.

Newfoundland dogs were bred to be working dogs. They originate from Canada and to live in the harsh climate of the area, they had to be sturdy and strong. Local fishermen used to task the dogs with helping them get nets into the icy cold waters. It made dogs that were able to sustain themselves in frigid water. Their thick fur allowed them to jump into the water with a life-saving barrier. Their sheer size allowed them to stamina to help.

Whizz spent ten years of his life working for the marine coast guard. In that time he was credited with saving ten lives and rescuing one fellow canine from waters. In addition to that though, after his career as a life-dog was completed, he went on to make appearances at various charity events raising money for children’s charities.

One of his handler David Pugh said that Whizz and his friends are a favorite attraction at various events. People love dogs and hearing about his acts of heroism only made him more popular. Pugh said that he loved when people were confused at how a dog could save a life. They only had to visit and watch the 40-minute presentation on the water to see just how invaluable these animals are.