Ollie is a loyal dog of a different stripe entirely.  He loved his family so much, that when they moved out of their home and felt him at the curb with the other things they weren’t taking with them, he just sat and waited.  He waited for quite a while, but they never came back, and now he’s in the very capable hands of a loving rescue group. 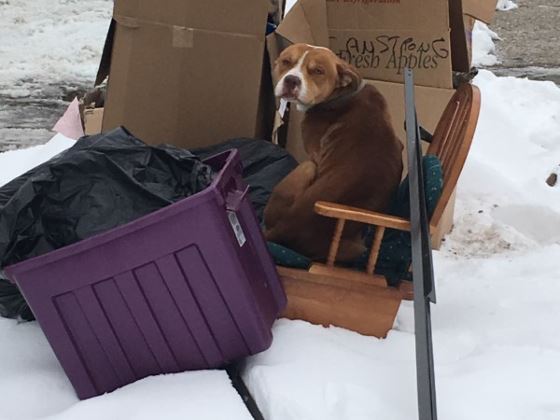 The photo shared to social media and news outlets of Ollie waiting amongst the garbage on a chair is absolutely heartbreaking.  He doesn’t even need to speak for one to see EXACTLY what he’s saying with those eyes.  By the time he was discovered and rescued, he had lost quite a bit of weight and a broken leg.

“He waited for his family to come back, and they didn’t want him.  They didn’t come back for him,” said Terri Looby with the Detroit Animal Welfare Group in a news interview.  Ollie’s former family allegedly took their smaller pup with them when they moved away but not Ollie.  “They did come back for the little dog, and then left Ollie.”

Ollie is going to need some medical attention for the busted leg, and as is almost always the case, there will be other expenses in the very near future for him as well.  A You Caring page has been set up for him by his rescue, and donations are very much appreciated.  If you would like to donate, or to get more information on Ollie and his ongoing battle, click here.

Some of you may remember that this is not at all the first time this has happened in Detroit just this year.  There was another dog that was called Boo whom went through something very similar.  To see our coverage of Boo’s story, click here.