Pebbles must have been born under a dark cloud. Because bad luck seemed to follow her at every turn.

But her darkest day was came when her former owner decided to tie her up outside a mall in Long Beach, California.

“One of my volunteers found her outside tied up to the cart rack in the pouring rain,” Darlene Sears, founder of California-based rescue group Kitty Katchers, tells iHeartDogs.

The drenched dog was coaxed into a car and, when Sears couldn’t find a foster family for her, she was taken to the local shelter. 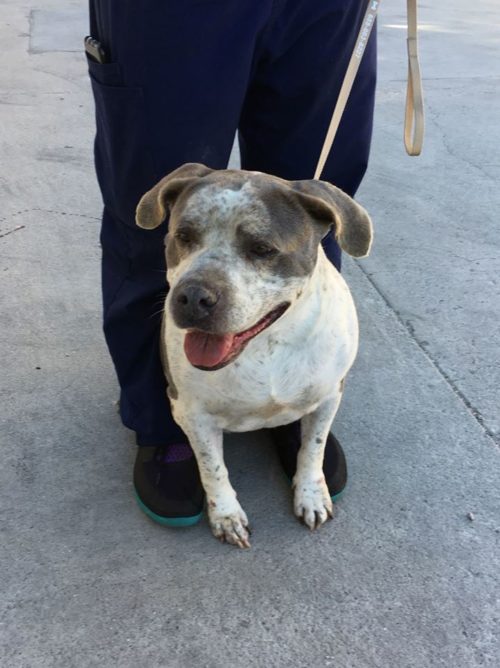 But things didn’t get much brighter from there.

Pebbles soon growled at another dog, earning her an “aggressive” label. She was placed on the shelter’s death row.

But Sears never forgot about the dog left out in the rain. She noted Pebble’s identification  number — and kept tabs on the heartbroken dog, hoping to still find her a home.

“We were told she’s being put down Tuesday, then we got it extended,” Elissa Arra, a California woman who was also trying to help Pebbles, tells iHeartDogs. “Then she’s being put down two days, later. We got an extension. It was excruciating not knowing if we were going to wake up and find out she was dead.”

About a week before Pebbles was scheduled for euthanasia, Kitty Katchers managed to get her out of the shelter.

And on that day, the dog who only knew dark days, lit up every heart in the room.

“I mean watching a dog leave the shelter kissing everyone who were about to kill her a few days before — incredible,” Arra recalls. “It seriously brought tears to my eyes.”

You can watch a video of Pebbles leaving the shelter below:

But the clouds haven’t yet cleared for Pebbles. She needs training badly. Although she isn’t showing any aggressiveness with other dogs, she will need to learn how to be a dog again before she can find a home. And if she doesn’t get that training, she may end up back at the shelter. The organization has started a fundraiser, hoping people might be able to pitch in for the costs of training her — as well as to help other dogs in similar situations. 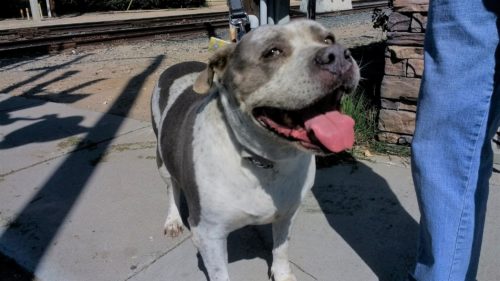 But no matter what, no one is walking away from Pebbles again. Trainers will work with the dog —  whose heart is already bursting with gratitude toward her rescuers — and soon, she will have her first real chance to shine.