On August 24, 2016, an earthquake with a magnitude of 6.2 struck Central Italy. Nearly 300 people lost their lives. Survivors have begun burying the dead. One victim, Andrea Cossu, was buried on Friday during a mass funeral held in a town south of Rome. His beloved cocker spaniel named Flash was seen leaning on the casket. 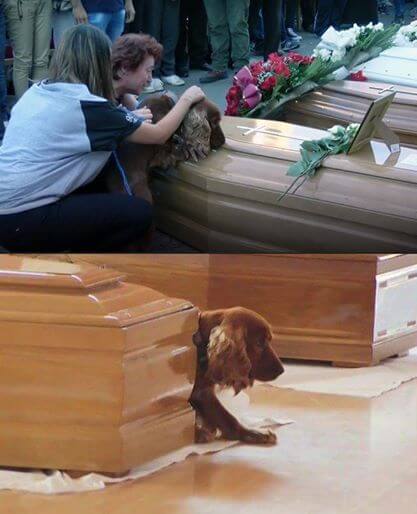 Flash reportedly didn’t want to leave and was seen pawing at the casket during the service. Flash laid silently next to the wooden coffin, his sad eyes looking straight ahead. Cossu was vacationing in the village of Pescara del Tronto when the earthquake hit. He was killed when the hotel collapsed on him; he was 45.

Flash still has a family, Cossu’s wife will be able to take care of him, but their lives have been forever changed. Flash’s show of dedication will break your heart.