A dog called Bella, who had always been chained up on a balcony may have often thought about escaping. She wasn’t kept in the best conditions, and was badly neglected, so if she had, we wouldn’t be surprised. One day, she apparently decided to try an escape, and ended up hanging by her chain for about five hours before she could be rescued.

The only place Bella had ever known was a third floor balcony in Cairo, Egypt. She probably had enough of being mistreated, but didn’t realize what the outcome would be. People passing by her heard her terrified screams for help, and she began to get a lot of attention from below.

It was almost too late when help finally arrived, but finally someone got to her and pulled her back over. She was barely alive, but she WAS alive. The injuries on her neck from the collar, and she as all skin and bones. 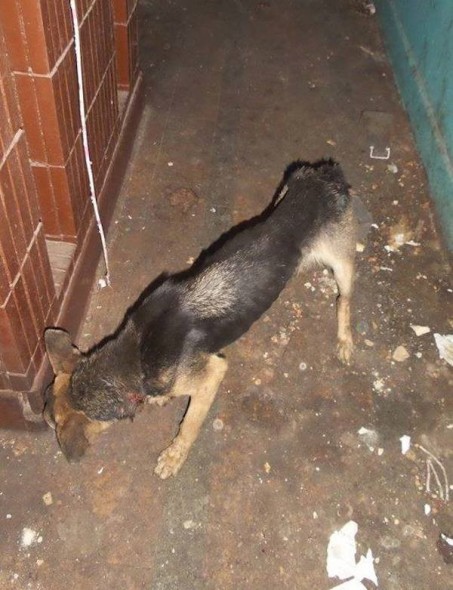 Bella was taken in by the Egyptian Society for Mercy to Animals (ESMA), and was given some very badly needed medical attention.  It wasn’t long before an American rescue group found out about Bella, and wanted to do whatever they could to help.  Special Needs Rescue and Rehabilitation (SNARR) and the ESMA often work together to rescue dogs, and get them into better situations.

In May of 2015, Bella was flown to the US.  He was fostered in Massachusetts, and stayed there for a short time to get adjusted to a very different life. One filled with love, food and lots of attention from lots of people.  And talk about a total 180!  Bella LOVED being someone’s dog.

She didn’t have to wait too long to find that forever home with a family that would love and protect her for the rest of her life.  She’s now two years old, and lives with a family in Texas.  According to her new family, you would have no clue what her life was like before, back in Egypt.  She’s a completely different dog.