Champ, in support of Stray Rescue of St. Louis

Champ does not have just one way to make us smile. Instead of greeting us when we come back home with big sloppy kisses like most pups, he carefully selects a valued toy from his box of goodies and brings it to us… smile! 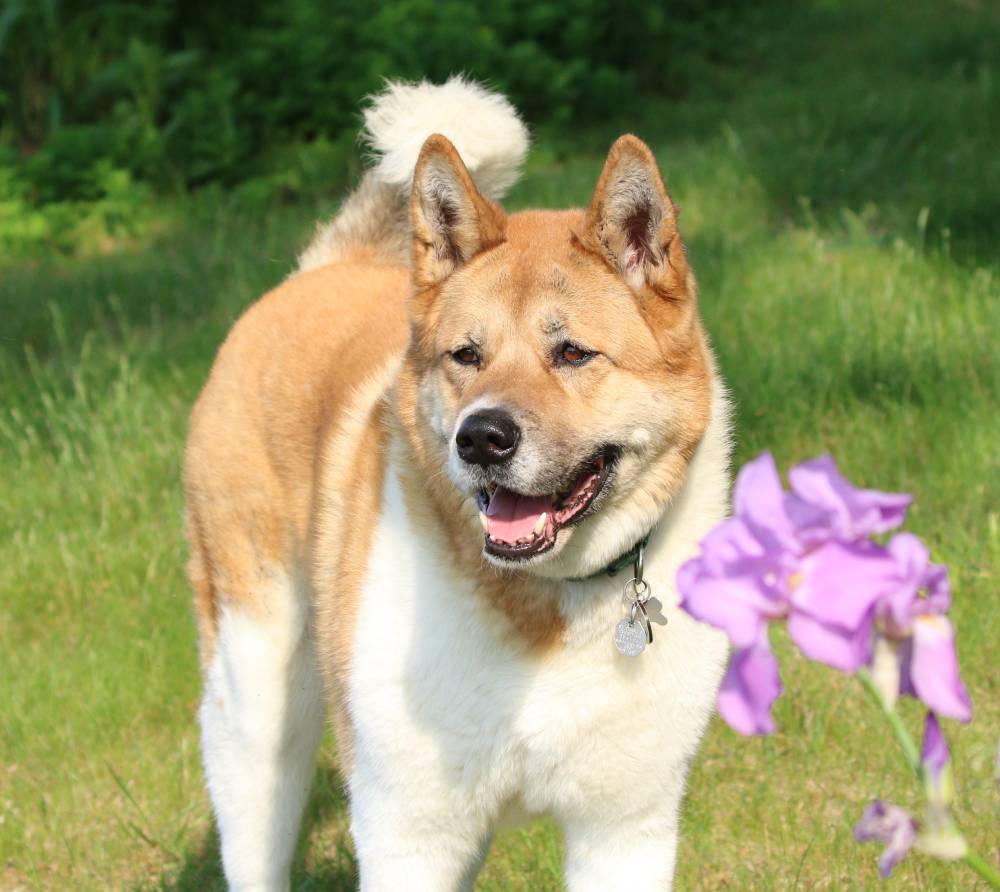 When winter comes and it snows, he becomes a champion Olympic skiing snowplow… laughing-smiling! When our four cats are not getting along, he breaks up the fights… satisfying smile! He has the funniest way that he sits with his paws all curled up in the shape of a heart …adoring smile! When he hears, and only hears, the specific sound of my truck keys and knows he is going for a ride and gets all excited… smile with amazement!

When he has to keep an eye on me wherever I go… content smile! When I think of his old days when he was used for dogfighting and that now he is an ambassador for his shelter, giving back in so many ways… proud smile. When I think of how much we love him and all the friends that he has that love him, too… blessed to know him smile! It is hard not to smile at my Champ most all the time when he is right beside me or just in my thoughts! 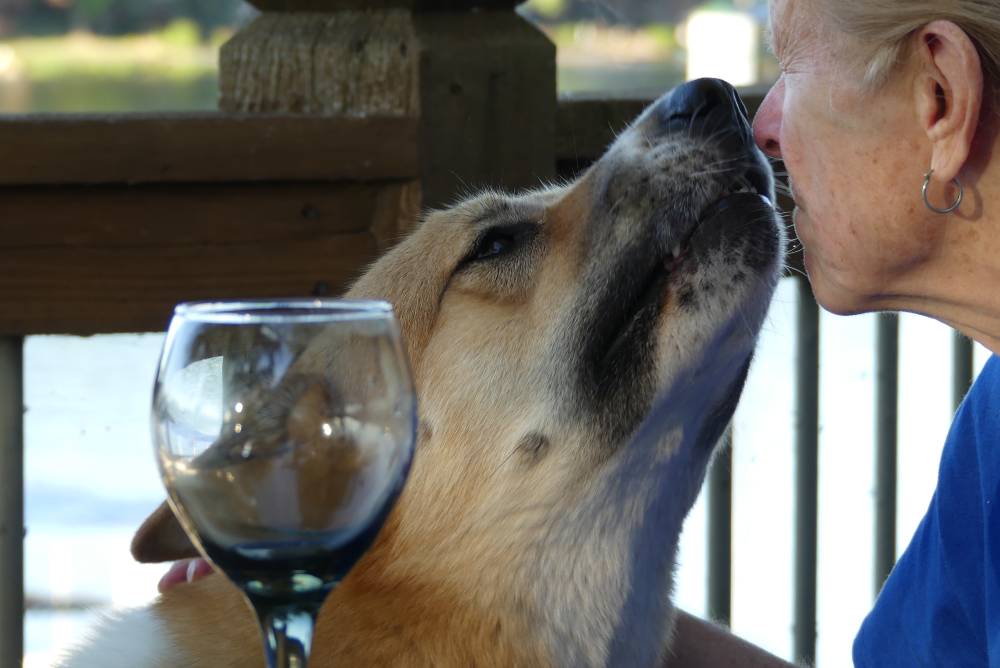 Note: Champ’s dad, Mike Duenke, says he has a company that is matching his $500 winnings, with both shares going straight back to the rescue. That’s an extra $1,000! Duenke says, “This contest was part of several promotions we were in to raise $15,000.00 for Stray Rescue’s new building. We just reached our goal with your help!”

Our sweet Reese was born with a cleft palate and congenital abnormalities to her eyes. Because of her genetic defects, she had to be separated from her mother and littermates to come to our home so she could be tube fed round the clock. It was her only chance of survival. When she was just a few days old, we bought her a snuggle puppy with a simulated heartbeat to keep her company. 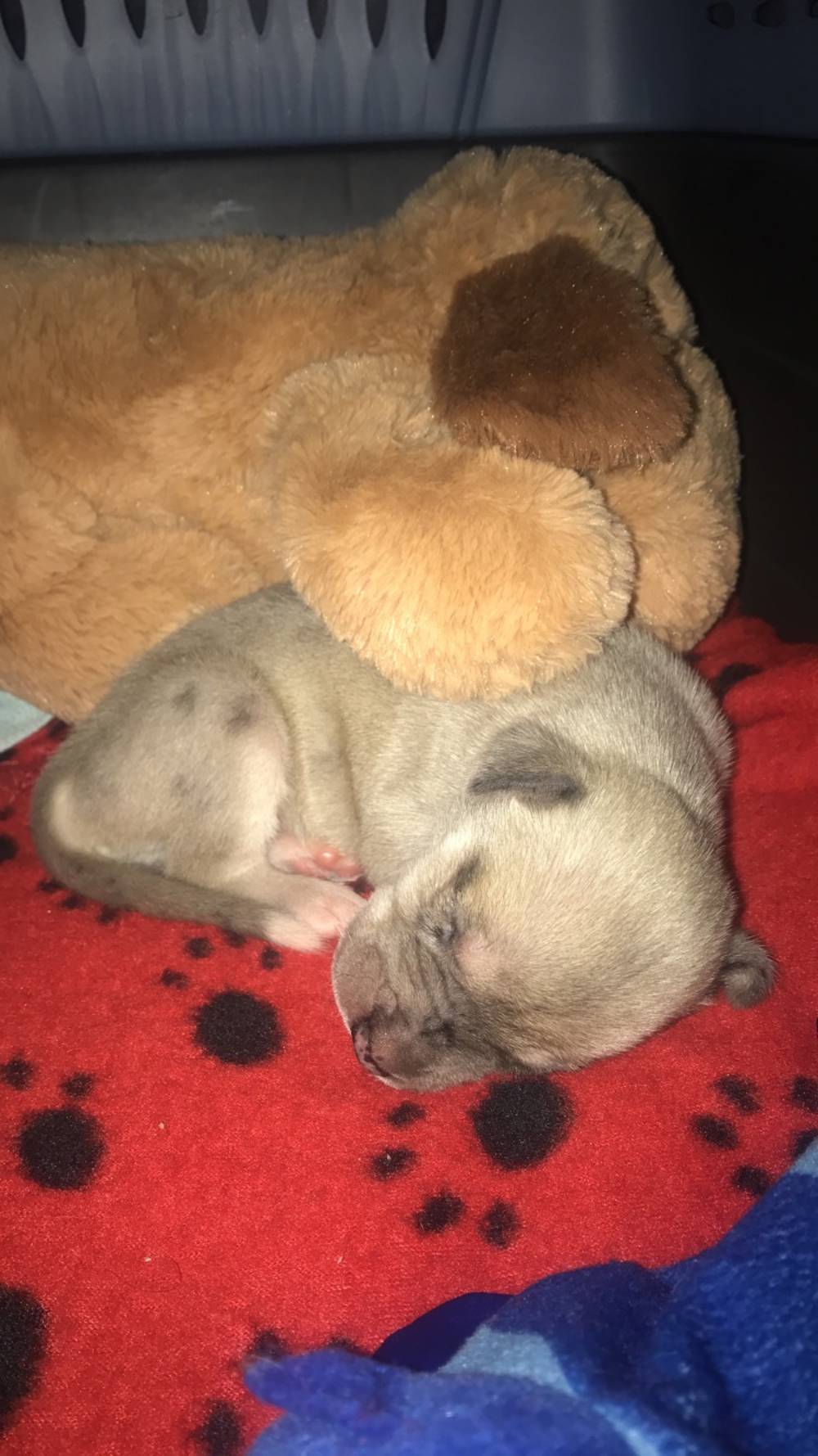 Her snuggle puppy immediately became her best friend. She slept with him every night and nursed on him for comfort. As she got older, she became more and more independent, but each night, she would track down her snuggle puppy and cuddle up with him before falling asleep. At three months of age, Reese’s right eye had to be removed due to glaucoma. Snuggle puppy was a constant companion and stayed with her during her entire recovery.

After caring for hundreds of fosters, Reese and her snuggle puppy became our family’s first “foster fails.” She is now 3-years-old, and snuggle puppy is never too far away! Just ask Reese where her baby is and she will excitedly find him and go trotting through the house. 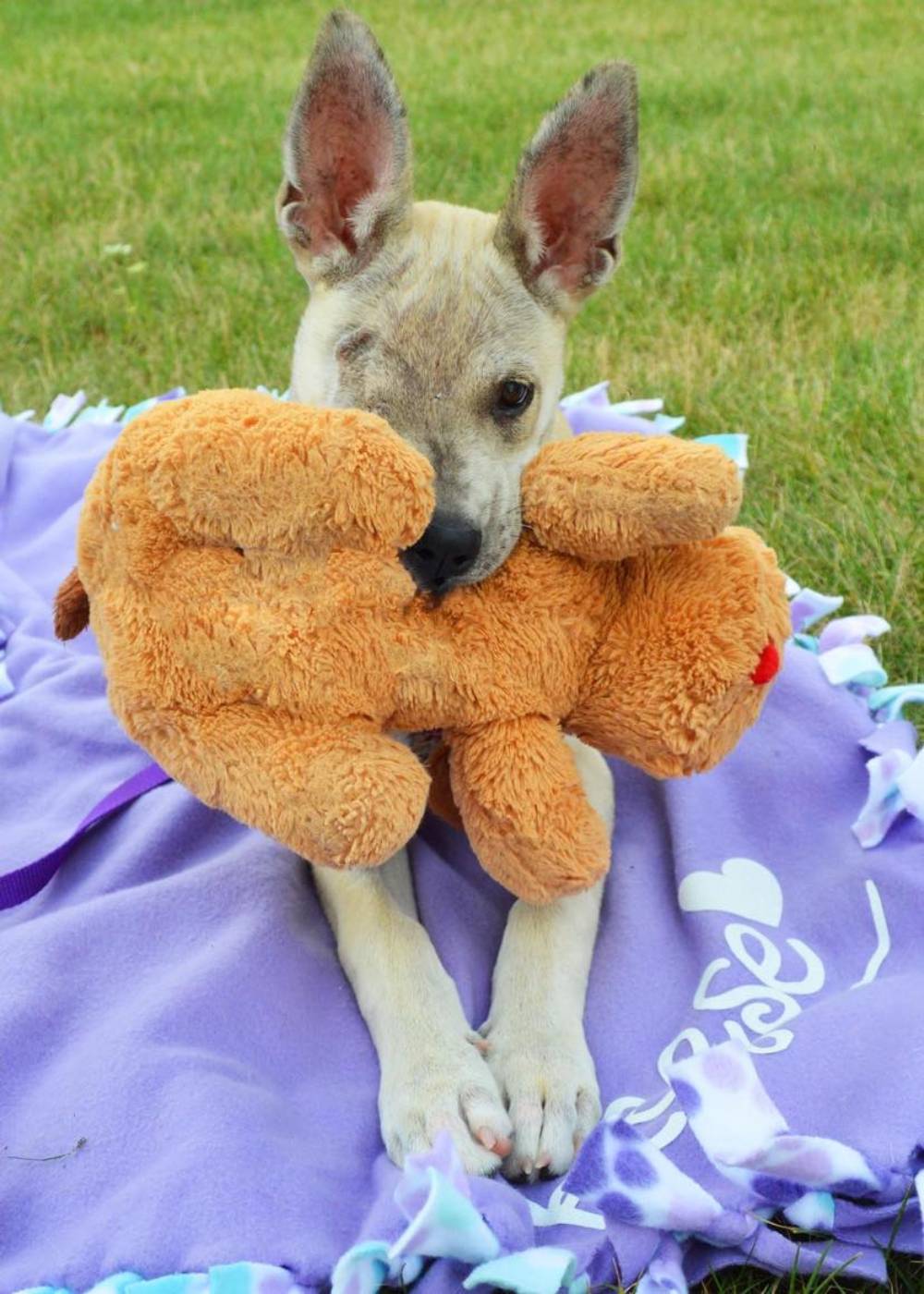 You can tell by his appearance he is well-loved, but she is so gentle and has never torn him. Who knew they would be best friends forever?

Juno, in support of The Last Resort Animal Rescue

In early August of 2011, this beautiful husky was found wandering in a state park in the mountains of North Carolina. A man found this dirty and matted dog and decided to find his owners. He kept the dog for a month, and when no shelter or newspaper in the district had news of his loss, the man decided to give him to his grandson to care for. However, the boy was too young, and the family quickly learned that a husky needs a mature dog owner. They then gave him to a friend of theirs and continued the search for his owners. 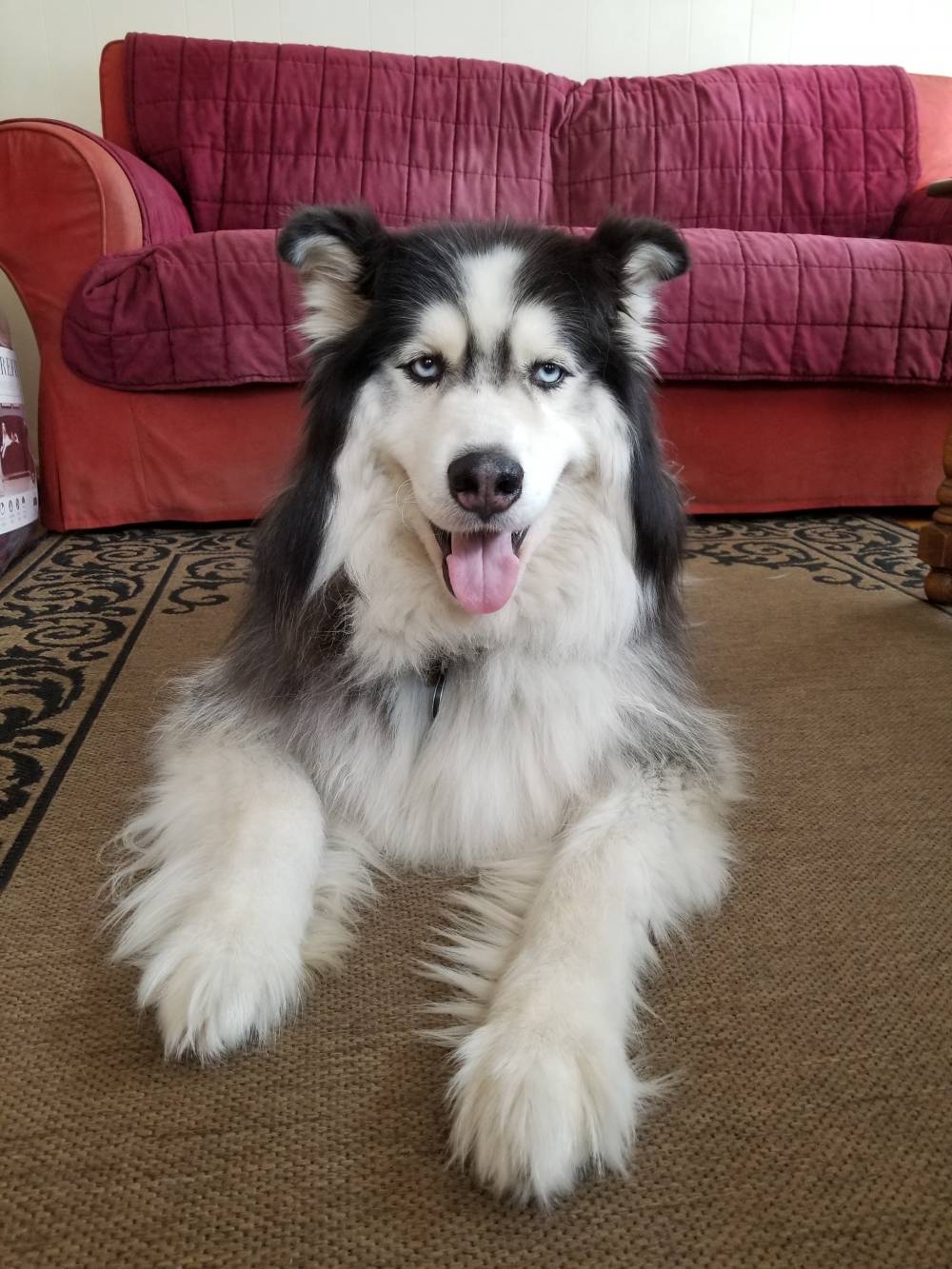 In October 2011, an insurance adjuster saw this beautiful dog locked up in a small dog lot behind the house of a claim he was working on. After asking the owners about him, he learned the story of how this dog, now called Juno, ended up there. A casual offer was made to let him take the dog. The insurance adjuster would spend the rest of the month trying to convince his wife to let him bring the dog home. She eventually felt sorry for Juno having to live in a tiny dog lot all on his own, and in a moment of weakness, she let her husband go get the dog. She thought all the while that they still may be able to find the original owners, since the previous ones had never taken the search to the web.

So Juno came to live with this family at the end of October 2011. The insurance adjuster’s wife took the search to the internet, thinking that someone would have posted something about losing a dog like this on social media or other outlets. Her search turned up no results, and Juno became an inside dog in a small house that already had another dog and cat. Space was tight, the yard was not fenced in, and Juno would run away if not on leash. Though he got along with the dog, the cat had to live in constant terror of his whereabouts and would only venture to the floor when he was outside. In their hearts, they knew that this was not the right home for him, so they posted Juno on Craigslist. 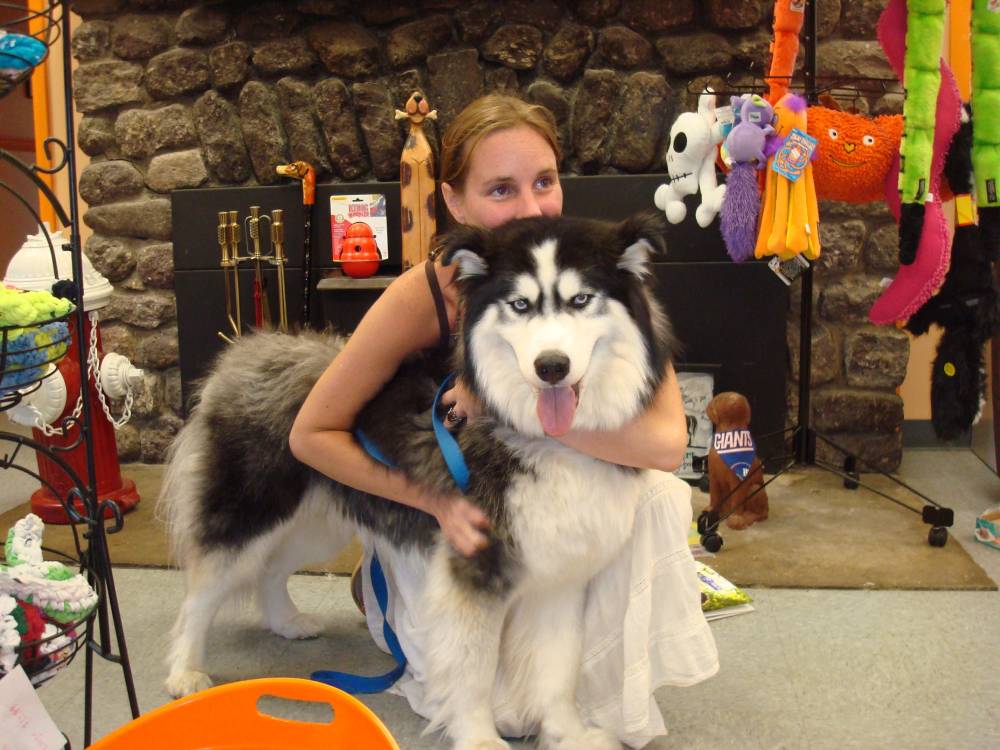 This is where The Last Resort stepped in. The Last Resort knew what can happen to pups posted on Craigslist, so they immediately contacted the husband and wife and said they would accept Juno into their rescue. However, there was a slight problem in that there were no foster moms or dads currently available at that time. The Last Resort contacted me because I’d already adopted two huskies from them. They asked me if I would be willing to foster Juno until they found him a forever home. I agreed, and Juno was transported up to New Jersey in early August 2012.

To say the least, I was a little apprehensive. Would Juno fit in with my pack of three rescued huskies? There were Mieshka and Bear, saved by The Last Resort, and Ember, my redhead with an attitude, saved by another rescue group. Meet and greet hour was fast approaching, and with trepidation, Ember and I drove to pick up Juno. Ahhh, big sigh of relief, things went well between Ember and Juno. No problems. Ember even liked him. And when I saw Juno, I had the biggest smile on my face and knew right then and there that I was officially a foster failure. Juno would be staying with me forever. He had found his forever home. 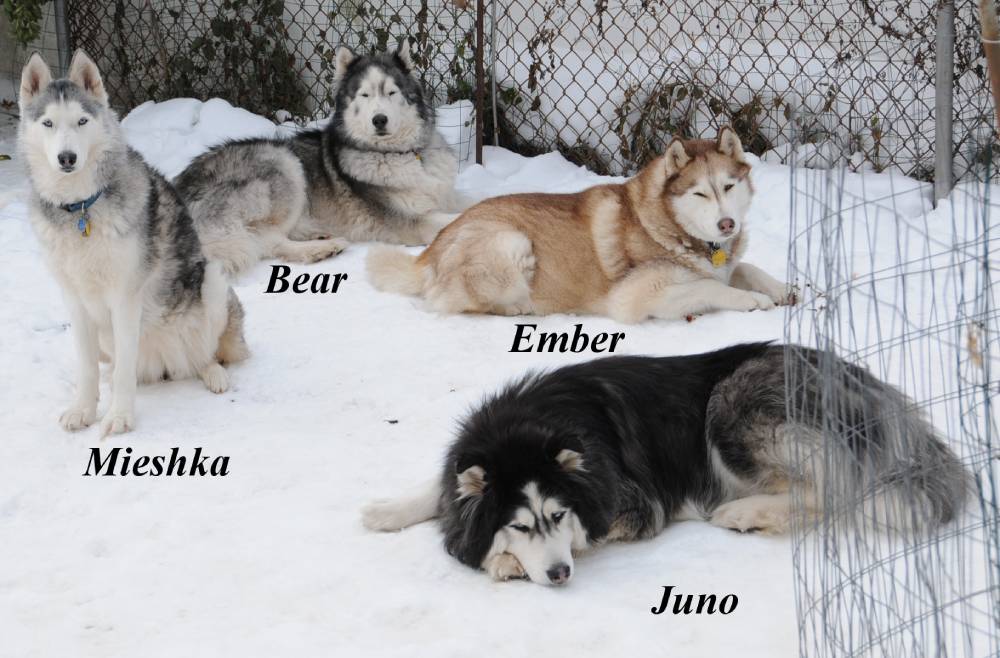