On January 30, 2015, Los Angeles firefighters came to the rescue of a dog that was carried away in a fast-flowing current in the Los Angeles River near Universal City. The rescue, caught on video by SKY9 news helicopter has been broadcasted by different media channels, but the dog has yet to be claimed by his owner.

Multiple witnesses reported the dog in the river to authorities and a Los Angeles Fire Department helicopter was dispatched to the area just in time. A firefighter was lowered into the river using a cable and the hero rescuer saved the exhausted dog. 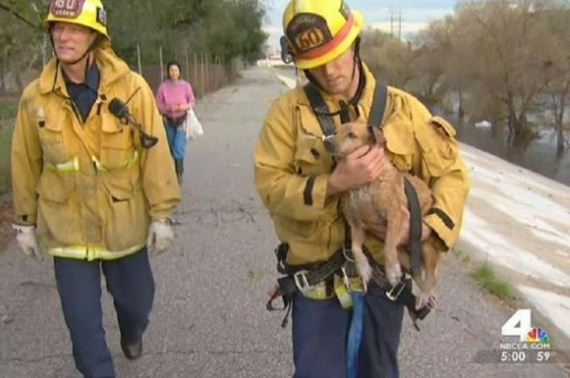 Both rescuer and dog were later carried across the river. The dog was dried off and later transported to the North Central Animal Shelter where the pet was scanned for a microchip, but none was found.

Rescuers named the rescued dog “Lucky” and hope the Shiba Inu finds his owners soon. However, if the dog’s owners do not come forward to claim him, Lucky will be placed for adoption through LA Animal Services on February 5, 2015.