When dogs like Harriet are rescued from the horrors of a dog meat farm, it often takes some time for them to get over their trauma. Like many such animals, she arrived safely, but was sad, scared and exhausted by the time she landed at the Humane Society of Tampa Bay.

Humane Society International had liberated the 3-year-old Korean Jindo from a cramped cage in Wonju, South Korea, where she and about 200 other dogs had been surviving in deplorable conditions.

“They did have shelter from the elements, but they didn’t have anything on the sides to keep out the wind and the snow,” Nash McCutchen, marketing coordinator for the Humane Society of Tampa Bay, told The Dodo. “They had no soft bedding. All crammed in there. They were basically living in their own filth. Food was thrown in to fatten them up.” 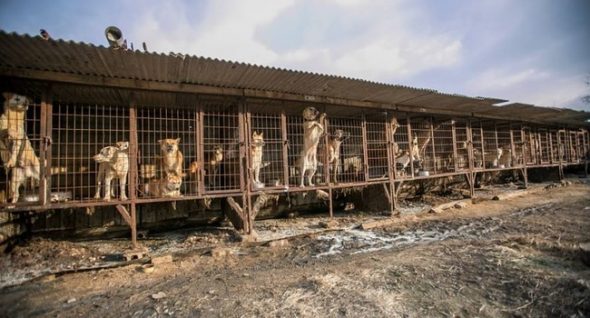 She and the other dogs were rescued earlier this month. Harriet’s journey had taken her from Asia to San Francisco and HSI eventually placed her and 13 other dogs at the Florida shelter, one of the nonprofit’s many emergency partners.

“When she first got here, she was pretty despondent and aloof,” McCutchen said. “She was interested in humans in that she would look at us, but she didn’t initiate any interaction, and she didn’t seem to want any interaction for the first several days.”

After about a week, Harriet started walking up to the front of her kennel, which McCutchen recognized as a good sign. “Some of the other dogs won’t even do that — they just stay back in their kennels, with their backs against the walls,” she said.

The staff tried taking Harriet outside into the play yard, but getting her there was not easy. “We had to carry her out, because she didn’t know how to walk on a leash,” McCutchen said. “None of them do.”

Harriet also had issues with open space — she didn’t seem to know what to do, and just stood there, not moving a muscle, according to McCutchen. Despite her issues, the shelter staff refused to give up on her. One day, Leslie Menichino, the shelter’s volunteer manager, decided to bring Harriet into the office area to get her away from the stress of the kennel. 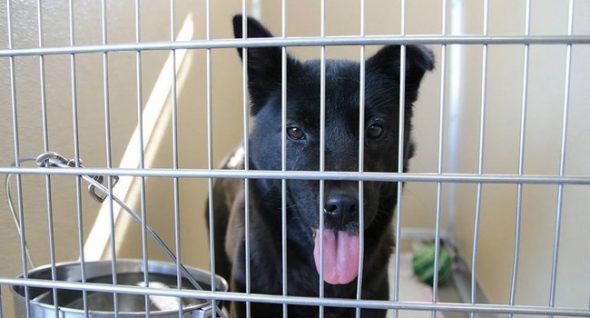 “She just stood in the middle of the office on the blanket that I had laid down,” Menichino said. “After a short while I saw her starting to doze off standing up. That is when I grabbed my phone and started filming.”

Harriet continued to sleep standing up until Menichino helped her lie down on the fuzzy blanket, which acted as Harriet’s very first dog bed.

“We think that when she was on the farm, they were all so tightly packed in that they’d fall asleep standing up, and the others would hold them up,” McCutchen explained.

Eventually, Harriet settled in and slept soundly for several hours.

“Being a witness to it brings to tears to my eyes and such happiness,” Menichino said.

After Harriet’s first nap in a bed, she’s enjoyed other firsts as well — for instance, she’s eaten treats out of Menichino’s hand for the first time, and finally gone on her first leashed walk.

“There’s still a lot of work to do for her to become comfortable enough for her to go into a home,” McCutchen said. “We’re just going to take care of her here until that happens.”