A teenage girl and the rest of her Belfast family are very lucky they have a dog.  When a fire sparked in an electrical socket right behind the girl’s bed, the bed caught fire, and Gizmo was the first one to notice.  He woke up everyone in the house, allowing all eight people (and Gizmo) to escape unharmed. 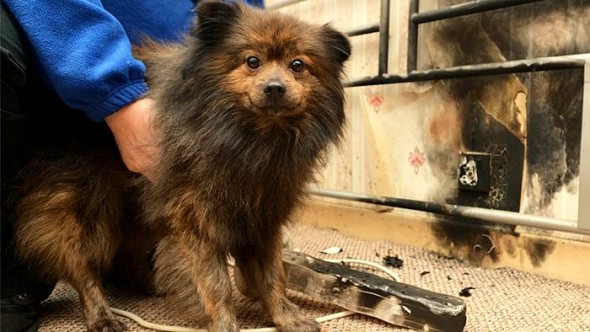 A power strip with a cell phone charging on it was plugged in behind the girl’s headboard.  When the outlet and cord sparked around 6 am, fire quickly spread around the bed.  It was just creeping up to her pillow when Gizmo frantically started barking.

She and the rest of the family were startled awake and rushed out of the home.  While they did have smoke alarms, they were unaware that they were not functioning.

“The only thing that alerted the family in the house was the fact that their dog awakened, barked and woke up the people in the house,” Northern Ireland Fire & Rescue Services Station Commander Kevin O’Neill told the Belfast Telegraph.

“They evacuated out of the house, got into the car and waited on the fire service and never returned to the house.

“That is positive and I would commend them for their actions in getting out and staying out and waiting on the fire and rescue service arriving.

“There is always that temptation and what we are trying to do is to reinforce the message to let us deal with the incident. If you were to re-enter there’s the chance you could be overcome by the smoke so we want to emphasize the point that you get out and stay out.”

The girl suffered only a minor burn to her arm, and was treated at the scene.

“It was only because the dog wakened her that she was able to get up and escape otherwise I’ve no doubt the next thing that would have caught fire would have been the pillow and her hair,” O’Neill said.