Tracy Matkea from Calahoo, Canada, is alive today thanks to her loyal Australian shepherd/border collie dog named Becky-Jo. Matkea suffered an almost fatal fall from a horse back on Jan. 10, 2016. Her dog Becky-Jo sprung to action, got her injured owner the assistance she needed, and because of that the woman’s life was saved.

Matkea and her husband Butch spend most of the Canadian winters in their second home in Wickenburg, Arizona. There, the couple tend to a small stable of horses and frequently go off on 6 mile long horseback riding trips. Their dog who is high energy and loves the exercise always tags along. 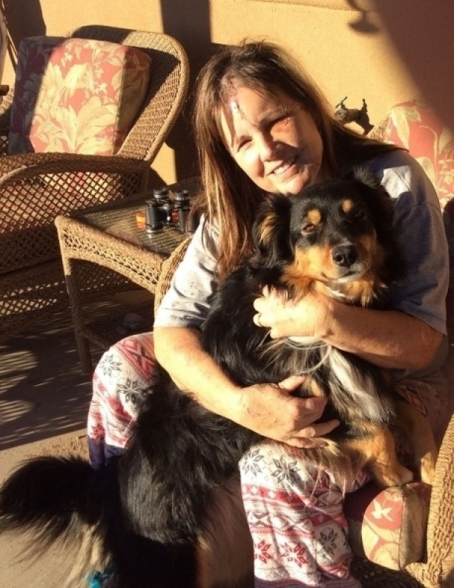 On Jan. 10, the pet owner got ready to go riding along a dry river bed about 500 yards from her home and Becky-Jo jogged next to her. The trail was an usual one but Matkea’s horse got spooked and threw her onto the floor leaving her unconscious.

“We’re assuming [the horse got] spooked at something,” the woman told CBC News. “It also appears from my injuries and from the marks down in the desert that I was probably dragged for about a quarter mile, and then the stirrup ended up coming apart and that’s how I broke free.”

When Becky-Jo realized her owner was injured she rushed back home to alert Butch of the accident.

“My dog arrived home and she was acting very odd, so my husband and my neighbor jumped on the four-wheelers and she literally led them to where I was in the desert,” said Matkea.

The men found the rider lying on rocks and covered in cuts and bruises. Immediately, the woman was airlifted to an area hospital where doctors said she could have bleed out if she was left unattended on the desert a few more minutes.

Matkea was treated for a major concussion, a broken facial bone, severe facial and scalp lacerations, and a severed head artery. Today she is recovering back home while her loyal dog keeps her company. At the same time, Becky-Jo wonders when will be the next time the two of them will go out and ride horses.

Doctors says the woman will make a full recovery, but Becky-Jo will have to wait a little longer before heading out with Matkea on their next horse riding adventure.