Violet’s head was weighed down with a heavy link chain padlocked around her neck for years before she was spotted by a woman driving by. The Pit bull was just one of 5 dogs on the property in Miguel County, New Mexico, who appear to have been chained up for years, before they were finally noticed by the Good Samaritan, who reached out to the right people for help. 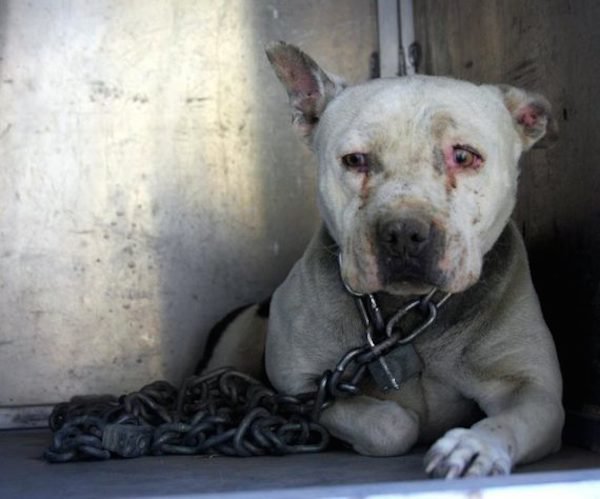 As it is illegal to keep dogs chained up without an owner around, the woman contacted the Animal Welfare Coalition of Northwestern New Mexico, and shortly after, Violet and the other dogs were rescued by the county sheriff’s department and came into the care of NMDOG. 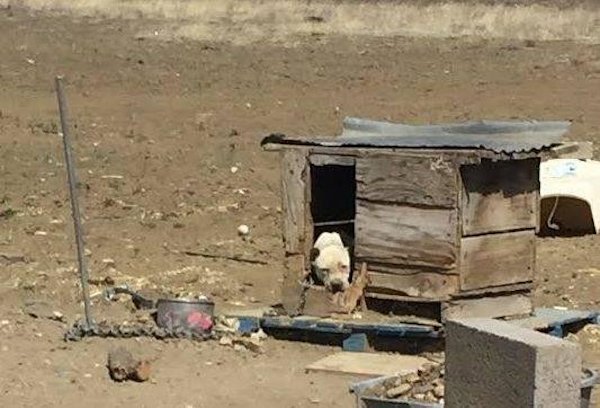 NMDOG learned that the dogs were basically abandoned as the dogs’ owner was in jail on unrelated charges and there did not appear to be anyone that had been taking care of the dogs.

When Violet was being examined by a vet, they noticed her skin was pinkish and red from being sunburned. She also had flystrike, a condition in which green bottle fly maggots eat away at an animal’s flesh. They are attracted to damp fur, urine and feces and had infested poor Violet. 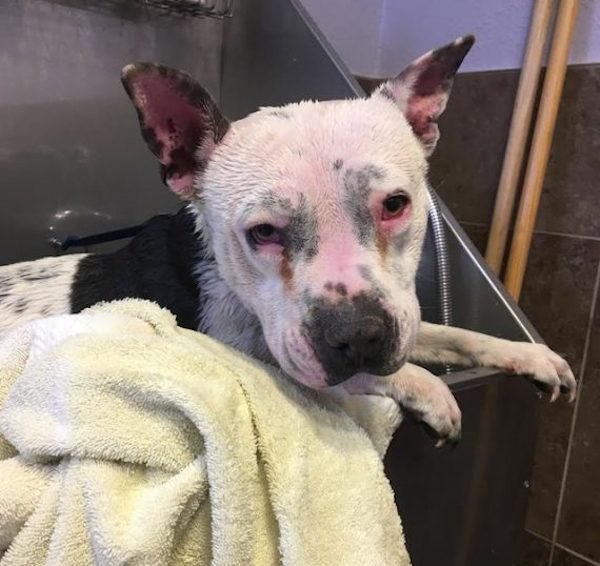 Violet was also fearful of humans and would flinch anytime rescuers would raise their hands quickly or move to fast to pet her. 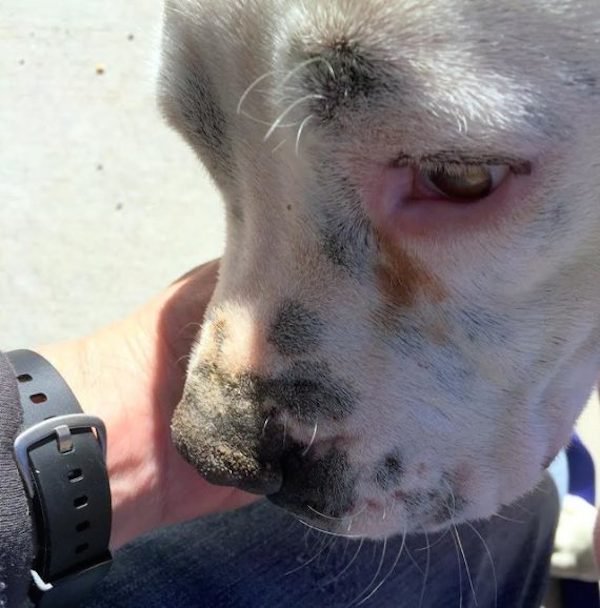 Her reaction hinted at a violent past, but thanks to the positive encouragement and patience of rescue volunteers and her foster family, she began to to trust people, Angela Stell, founder and director of NMDOG, told the Dodo.

The two-year-old dog’s sweet and gentle nature slowly emerged with vet staff and volunteers, who she loves to snuggle with. 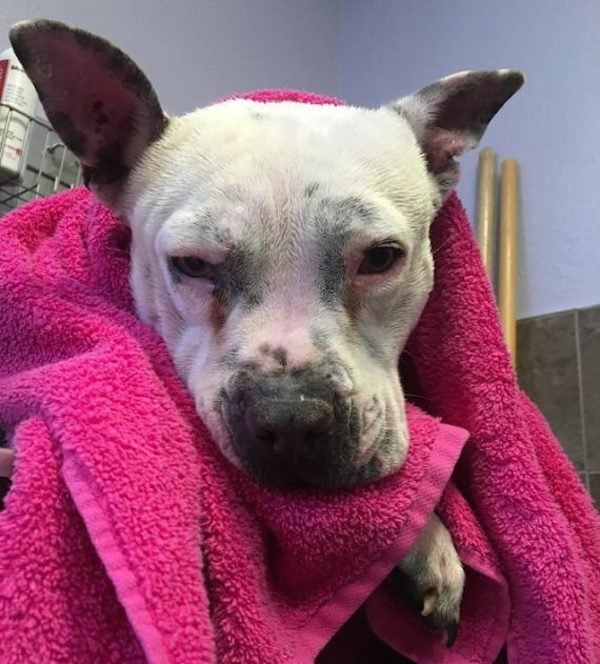 Her playful side also came out when she got her first stuffed animals. She especially loves a raccoon squeaky toy she got at the vet clinic. 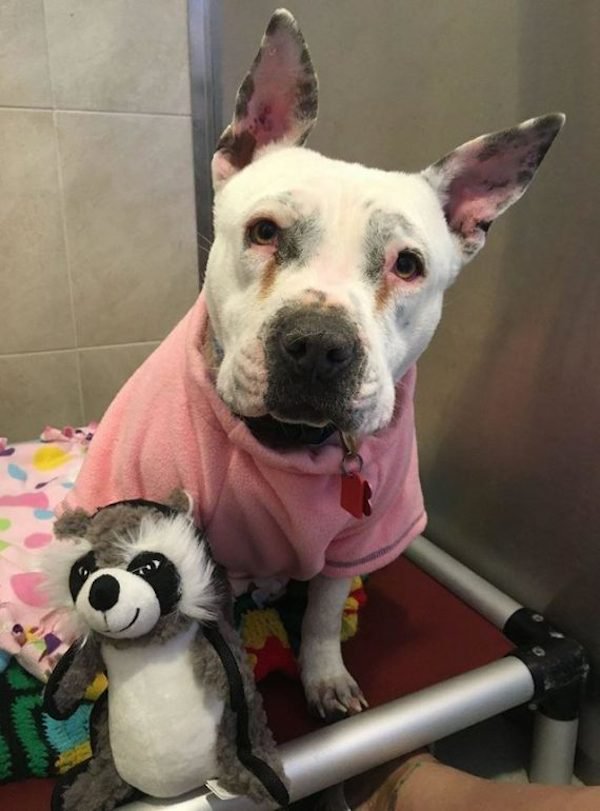 She also loves to go on walks and has become best friends with Hops, one of the dogs rescued at the same time as her, as well as her foster sibling NMDOG Alum Blaze. 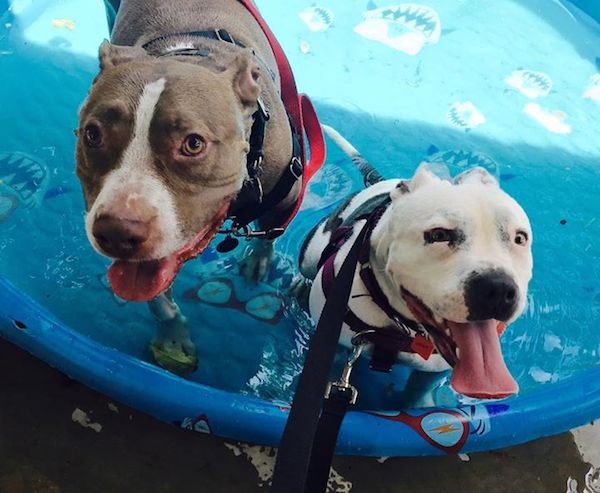 NMDOG also comments that Violet has an unusual “superpower” – making people smile and laugh, and moving her ears independently of each other. They say that sometimes these superpowers go together. 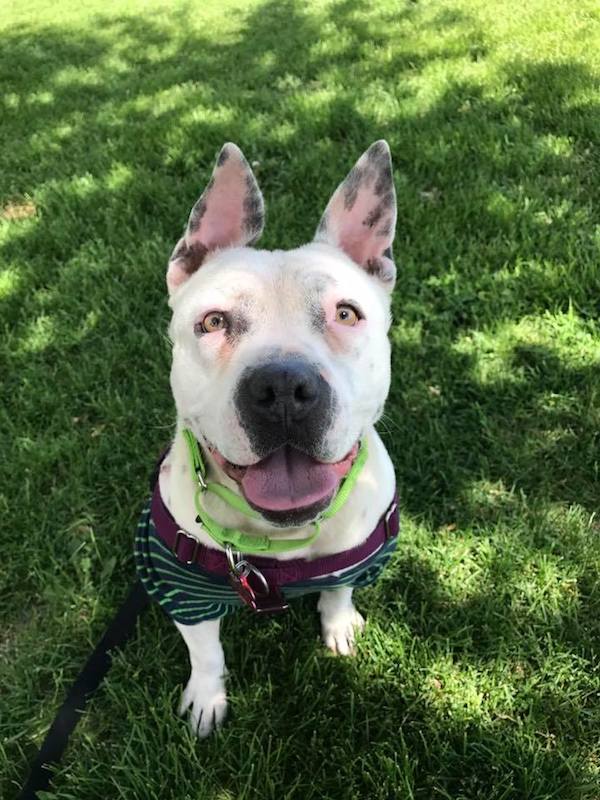 >It’s wonderful seeing a dog who was so abused and neglected come out of her shell and become a healthy, happy pup. Now all she needs is a loving forever home!