In many areas of the world, Christmas is celebrated with fireworks, and thanks to firework enthusiasts, many dogs run away or get injured during what’s supposed to be the happiest season of the year.

Toto, a dog from Neuquén, Argentina, was home celebrating with his owners but got spooked when neighbors started firing fireworks. The Retriever mix got so scared, all he wanted to do was run and hide away. 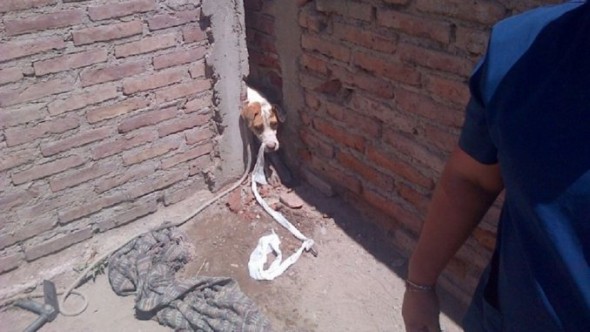 The dog ran to the yard and in his fleeing attempt wedged himself in between the walls separating his yard and his neighbor’s yard.

Toto didn’t know this, but the walls were built at an angle, and the space between them got smaller and smaller the deeper the dog went it. Unfortunately for the pet, instead of running away to a safe place, he got himself trapped and in a lot more trouble.

The pet’s owner had no idea Toto had been spooked by the noise nor that he was pinned down in between the walls, but thanks to the dog’s constant barks and frantic whines, the trapped dog was found soon after he took off running.

The Fire Department was called to the rescue and within minutes a group of firefighters were on the scene ready to extricate Toto from the wall. Rescuers broken down part of the wall and pulled the dog to safety.

The pet didn’t suffer any injures, not even scratches, but his mental health is forever scarred.

Fireworks and pets don’t mix. Please make sure to secure your pets and create a safe heaven for them to retreat to when there will be celebrations that involve fireworks.