Not much is known about Tom; he was found lying on the grass, too weak to stand, clearly starved over a long period of time. But what’s known for certain: he is in good hands, and will never have to feel the pain of going hungry again. 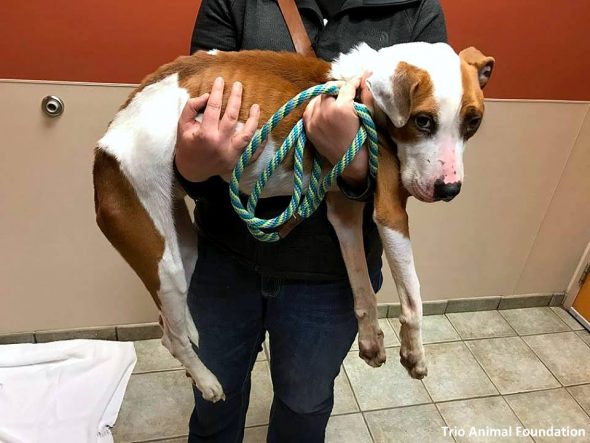 This report came from Trio Animal Foundation on February 20th:

This evening, TAF was contacted about an emaciated dog that had been found near death in the grass. With the help of our friend Frank, and two kind women, this pup found his way into our care and to the ER Vet.

We have named the pup Tom and he is now stabilized at the emergency room receiving IV fluids and undergoing medical tests. At this point, our main concerns are his organs shutting down due to starvation/dehydration and re-feeding syndrome. 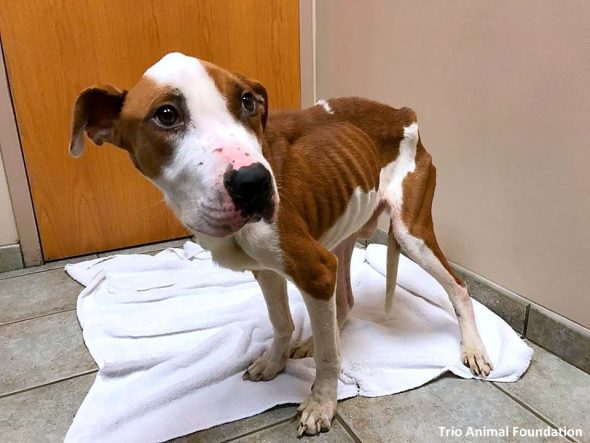 Right now it is too soon to know everything that is going on with Tom’s medical condition. We do know that he will be hospitalized in the ER for at least three days.

Please keep Tom in your thoughts and prayers. The next few days are going to be pretty tough. We will let you know how he is doing after we speak to his vet in the late morning.

Update, February 21st:  We just left visiting Tom at the ER Vet where he is hospitalized. He is doing relatively well, resting comfortably on IV fluids and has been receiving several small meals over the last 18 hours.

Tom’s bloodwork revealed that his phosphorous levels were low along with his calcium and albumin levels. He is also anemic. All of these results are consistent with the effects of starvation on his body. He is receiving supplements with his IV fluids to help restore the electrolyte levels in his system.

As expected, Tom has fleas. He has received treatment for this along with a broad spectrum dewormer. 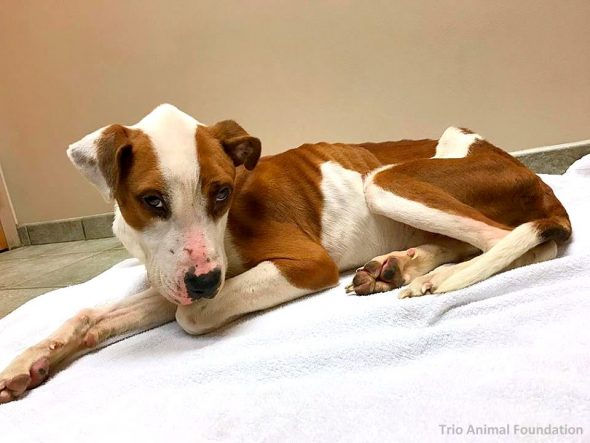 In addition to this, Tom has several scabs on his body. One in particular is pretty fresh and is oozing a bit so he was started on an antibiotic… the last thing he needs is an infection in his run-down state.

Tom will continue being hospitalized at the ER for the next few days. Once his body is stable, he will be released into our care.

When we left Tom, we had to leave a $2,144 down payment towards his medical bills. If you would like to help sponsor Tom’s medical bills, we would really appreciate the help. Any tax-deductible donations can be made at www.trioanimalfoundation.org. You can earmark your donation “Tom.” If you are making a donation via a smartphone, and aren’t able to earmark your donation, please email your receipt to sue@trioanimalfoundation.org.

Please continue to keep Tom in your thoughts and prayers. Thanks 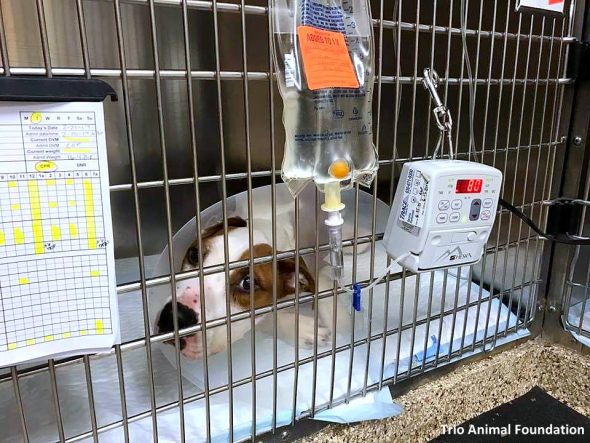