Last Christmas, the Esaus from Sherwood, Oregon, were preparing to celebrate their first holiday with their then five-month-old Australian Shepherd named Pippin, however, on Dec. 14, 2014, the a “Grinch” stole their dog and the Essaus’ Christmas spirit went out the door along their stolen pet. However, Christmas 2015 will be completely different because Pippin has been found and will be spending Christmas at home where she belongs. 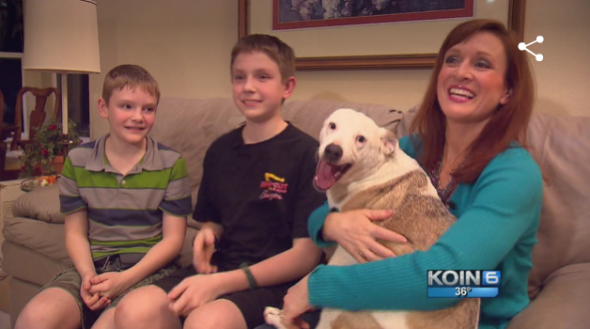 Cara Esau told KOIN 6 News that when the dog went missing they searched for their pet everywhere, however, the playful pup was nowhere to be found.

The family never lost hope Pippin would be found, so much, they never got rid of their dog’s crate, bed, leash or bowls, but what the family didn’t know was it would take a full year to find their dog.

This December, 54-year-old Penelope Whipple, was seen outside a Beaverton store with a dog resembling Pippin. A concerned citizen called authorities to tip off the dog snatcher and police arrived to investigate.

Police ran Whipple’s record and discovered the woman had committed similar crimes, and multiple times in the past. The dog was scanned for a microchip and thanks to the registered chip, Pippin was identified and reunited with her family.

For the Essaus, a Christmas miracle happened. Their beloved dog is safe and back home where she belongs, while the “Grinch” was placed behind bars and had to pay a $10,000 bail before regaining her freedom.