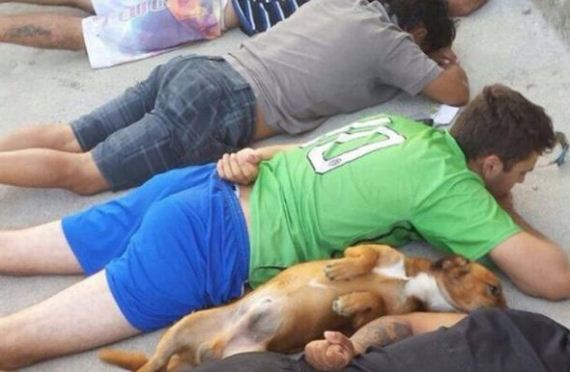 We know dogs are truly loyal to their owners. It doesn’t matter if the pet owner is a law-abiding citizen or not, the pet will stand by his or her owner no matter what.

In Florianópolis, Brazil, police officers raided a home and apprehended a group of drug traffickers. When the arrest was made, a pet was found in the residence and when the four-legged friend saw his owners lying on the floor, he too surrendered himself and lay next to his owners.

One of the officers found the action of the canine endearing and snapped a photograph of the dog next to his owners. The officer posted the image on Twitter and the image went viral.

The dog’s name and breed are unknown, an even though we don’t know what happened to the dog after his owners were taken away, one thing is for sure, the pet was not arrested and thrown to jail.