The crowd cheered late Tuesday afternoon as a Golden retriever was pulled from the rubble of the Mexico City earthquake – scared but alive and unhurt. The dog was carefully lifted out of the rubble in the Alvaro Obregon area, and as he was picked up and placed into the arms of a nearby rescuer, the crowd cheered and applauded. And as the dog was carried to safety, multiple kindness and happy tears exploded from the faces of survivors and rescuers alike as the dog was given tiny pats on the top of his head. 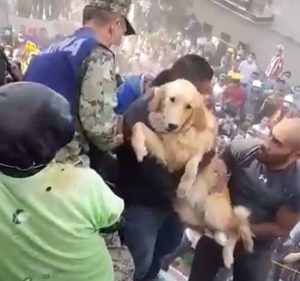 At least 217 people have died after the devastating 7.1 magnitude quake struck. All day rescuers have been frantically searching the rubble in the area of a school hoping to find some of the missing young children. One of the most desperate rescue efforts was at a primary and secondary school in southern Mexico City, where a wing of the three-story building collapsed. According to AbcNews,  the bodies of 21 children and four adults have been discovered at the site stated Mexico’s Education Minister Aurelio Nuno said. Eleven people have been rescued, and three people are still missing — two children and a teacher.

On Wednesday, rescue dogs accompanied harnessed workers wearing helmets, forming bucket brigadesand passing up pieces of debris as they searched for survivors. At one point, the rescue crews dropped listening devices into a hole amid the rubble of the collapsed structure and attempted to send in a rescue dog to sniff for survivors.