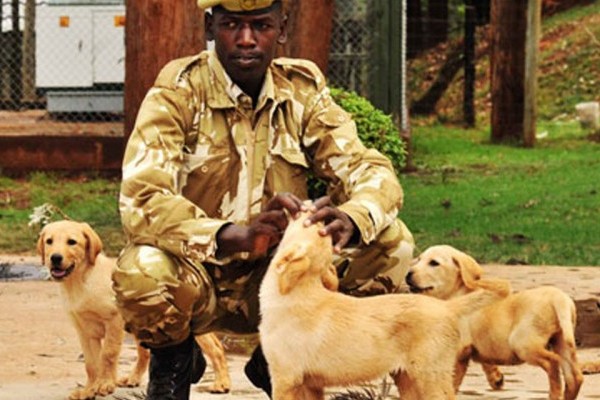 It’s an unfortunate reality that the African elephant population will likely be extinct in the wild within 10 years. The reason? No, it’s not due to natural causes or a species-wide disease…it’s because of poaching. Ivory poaching has run rampant throughout East Africa, home to the African elephant. As a result of this vicious hunting practice, the elephant’s population has dramatically plummeted – it was reduced by half in just a few years.

Tanzania’s President Jakaya Kikwete has appealed to the international community asking for support to fight against the poachers, saying game rangers are often overwhelmed by the scale of the problem, and aren’t well-equipped to deal with well-armed poachers, who, to make matters worse, are often funded by terrorist organizations.

But the good guys just got a new, unlikely helping paw…dogs!

The African Wildlife Foundation (AWF) has partnered with authorities in 18 countries in a project to train dogs and their handlers in the fight against poaching and illegal wildlife trafficking on the continent. The foundation has contracted a Tanzania-based canine specialist group for the deployment of canine detection units at ports and border crossings in the countries. These dogs will do what they do best – sniff! The hope is that they will be able to detect ivory and rhino horn being smuggled across borders of various countries. The sniffer dog units will be deployed to key ports within the participating countries, AWF explains.