Animal control had been trying to capture a dog that was roaming around a gated community near the mountains. She was so thin that is was a miracle she was still alive. Hope For Paws came in when Animal Control failed and it’s a good thing they did!

The poor pup had lost a lot of fur, you could see her bones through her skin. Her appearance was completely heartbreaking. The dog was extremely afraid of humans but she couldn’t resist the cheeseburgers her rescuers gladly fed her. The poor girl really was starving. 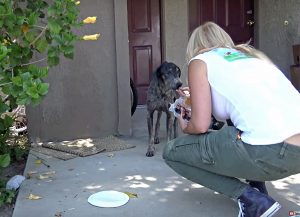 As rescuers continued to feed her, one snuck behind her to get the snare ready. It would be a scary few seconds, but they had to capture this poor pup. She needed medical attention and a real home. The streets, or mountains, are no place for dogs! She deserved a real home! 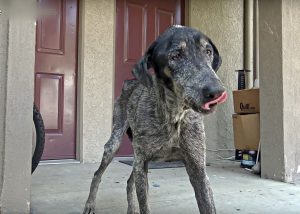 Finally, the skinny dog was delicately captured and placed into the car. She was scared but did very well considering. Her rescuers named her Edna. When they got back to the medical facility, they checked her for a microchip… and she had one! Turned out her original owner placed her into a new home years ago. Those owners told her that Edna had died! How horrible!

But despite the good news of finding Edna alive, her original owner wasn’t interested in taking her back. Maybe that was a blessing because… drum roll please… Edna was placed into a wonderful foster home and from there she found her forever family! A wonderful mom and human sister who absolutely adore her! No more hungry, lonely days for Edna ever again! YAY! 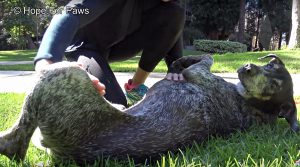