As K. Kris Hirst from ThoughtCo. describes, for thousands of years we have used them to help us herd, hunt, and alarm us to danger. Although we’ve bred dogs to display the characteristics that they show today, instinctually they remain pack animals, bowing down their instinctual pack order.
What is the pack order?

When dogs live in packs in the wild, they obey what is called the ‘pack order’. The order is as follows, with alphas on top and omegas at the bottom:

According to Dog Breed Info, “Pack leaders are not aggressive, angry or bossy. Lower members of the pack are not fearful of the pack leader, but rather respectful.

“The pack leader is the stronger minded being, calm but very firm.

What does this mean for me?

Well, when you get a new dog, your family has now become their pack. As a result of this change, it’s very important to establish yourself as the pack leader.

Happy Tails SPCA Blog explains, “Your new puppy’s first primal instinct on entering her new home is to find her place in your “pack— and she will do this by testing the boundaries you set for her.”

So, does dog your dog consider you to be the leader of your pack? Answer the following questions to find out!
Does your dog follow or lead? 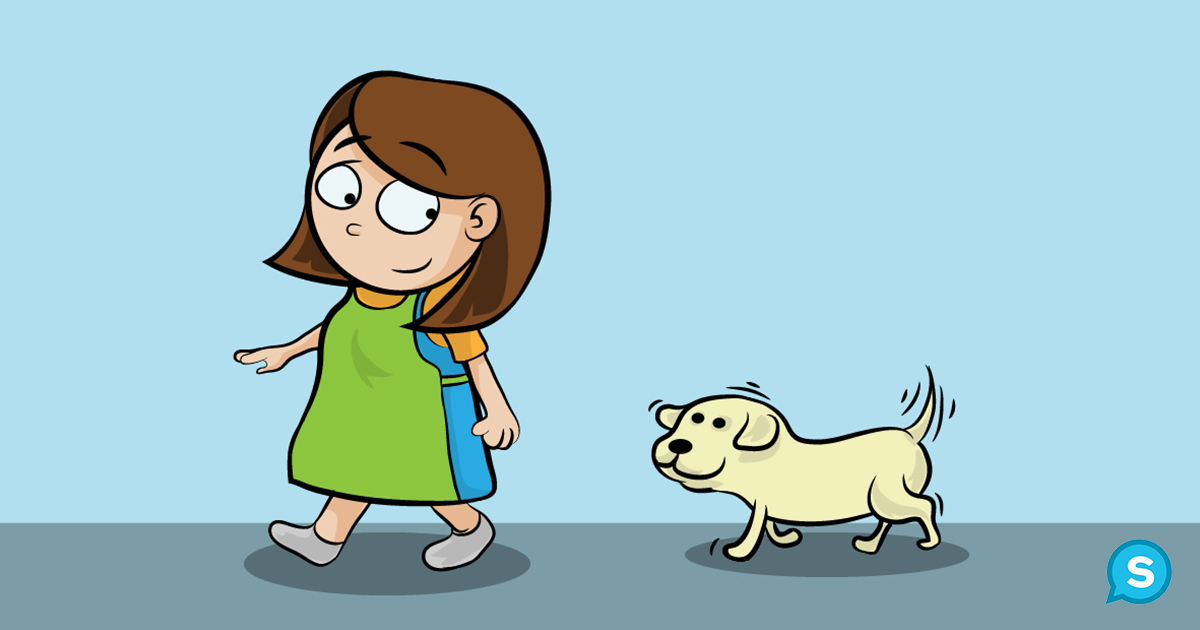 According to the famous dog trainer Cesar Millan, dogs are born knowing that the pack leader should lead, and he notes, “You will need to change your role if you’re the one following your dog around the house.”

The same applies for going through doors and on walks— which is why walking your dog is a great way to practice showing your dominance.

If your dog trusts you to lead the way, it’s a good sign that they consider you as the alpha, pack leader!

Does your dog wake you up?

According to Cesar Millan, letting the pack leader sleep is a sign of respect. So, if you’re constantly being woken up by your pup, “he doesn’t respect you”— and you are definitely not the pack leader.

Cesar recommends ignoring your dogs when they try to do this. Then, when they behave appropriately, give ’em a nice big treat!

Does your dog eat first and/or steal your food? 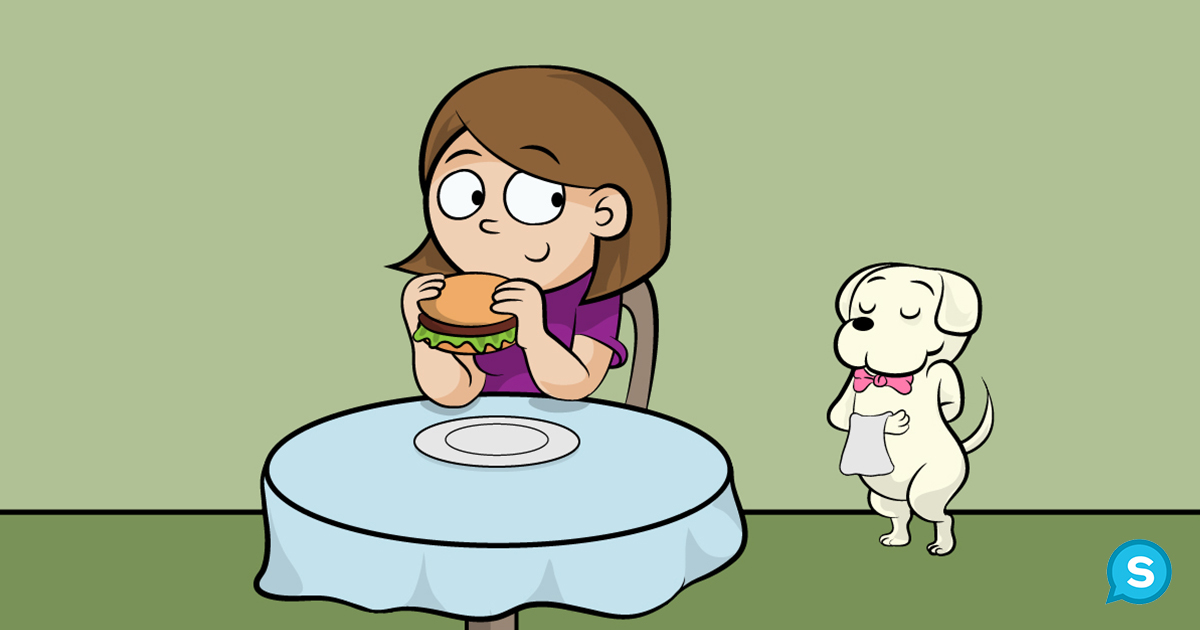 According to most sources, the leader of a pack will always eat first.

Dog Breed Info says that when a dog growls at you while they are eating, they are essentially saying “I am the leader and you must wait.”

However, recent sources claim that in the wild, when food is abundant, all dogs eat at the same time. So while you aren’t doing any damage by eating first, if you’re looking for a way to establish yourself as the leader of your pack, this is an easy one!

Additionally, CANIDAE states, “The dog who recognizes you as his leader and respect you will never steal food from your hand, the dinner table or your plate. He will wait until you decided it’s time for him to eat.”

The folks over at CANIDAE also say that if you can leave your food laying around without your dog touching it, that it is a “big sign” of respect.

Does your dog jump on you?

Cesar Millan says that dogs show dominance by jumping on others. So, if you let your dog jump on you, you are basically telling him that you are not the pack leader.

While you can’t exactly jump on your dog to show him who’s boss, Cesar says a great way to reassert your dominance is by simply letting the dog know it’s not okay and by learning to manage the issues appropriately.

Does your dog give you kisses? 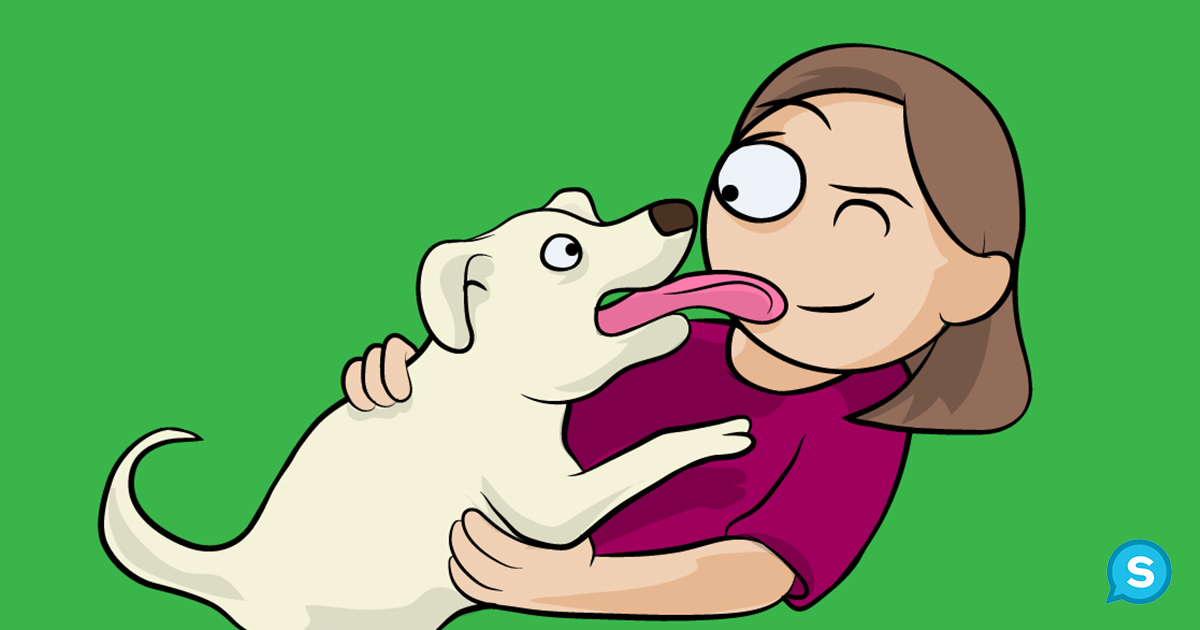 Although some people find it annoying, dog kisses are a sign of submission.

Animal Planet explains, “In the wild and in domestic dogs, you’ll find they will lick around the mother’s mouth as newborns, and puppies still retain that instinct. It’s also sort of a submissive gesture— the more subordinate members of a pack will lick the more dominant members, and that’s important in maintaining pack harmony.”

So, if your pup loves showering you with gooey, puppy kisses, they definitely consider you to be the dominant one in your relationship!

Does your dog sleep in your bed? 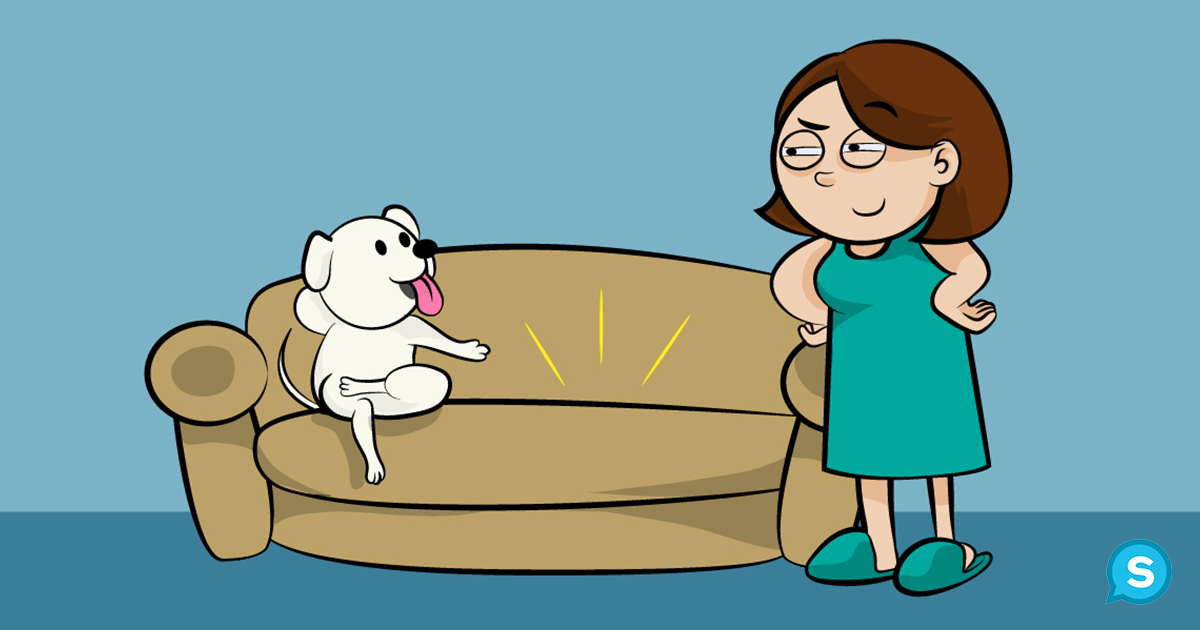 According to Dog Breed Info, a dog pack usually reserves the comfiest sleeping spot for the highest ranking members of the pack. So, if your dog lets you have the bed for yourself, there’s a good chance they consider you the alpha.

If you don’t want to give up your cuddle buddy for a stupid alpha status, however, Dog Breed Info recommends putting a few rules in place:

“The dog must be invited up and not be allowed to push the humans out of the way. Making them sleep at the foot of the bed rather than, for example, on your pillow is best.” 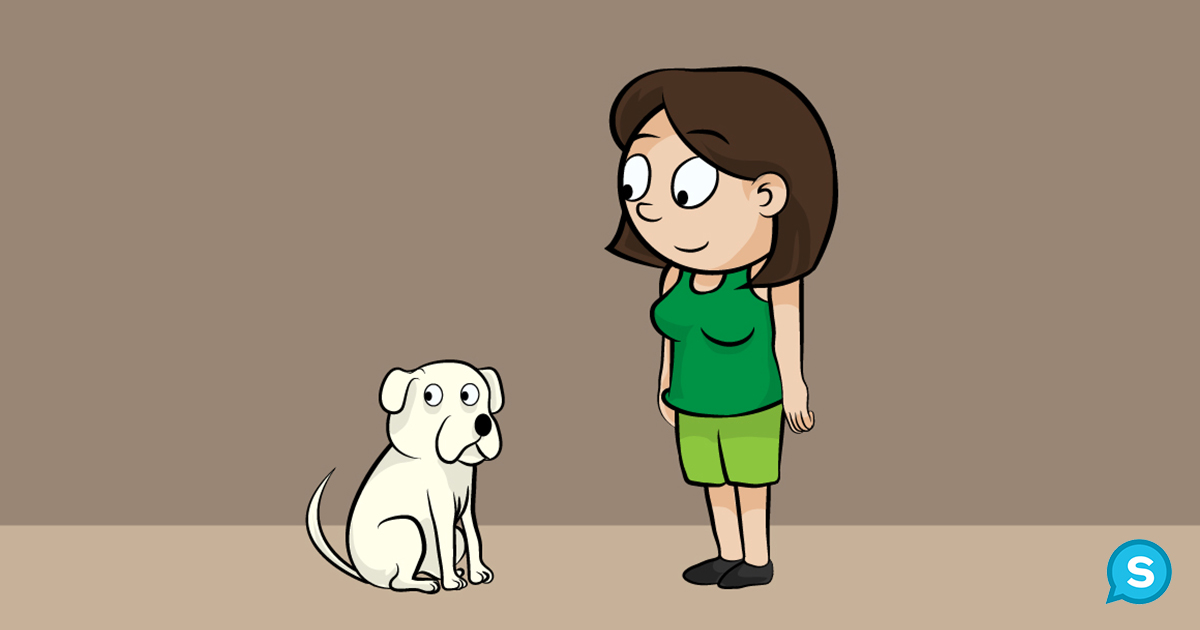 According to the Dog Owner’s Guide, eye contact is used by dogs to keep order in the pack. They say, ‘Only an alpha animal uses the stare to remind everyone who is in charge. When you initiate eye contact, you express your alpha position.”

Don’t start having staring contests with your pup, however— especially if they already think they are the dominant member of the pack! Dog Breed Info and the Dog Owner’s Guide both warn that if you lose, you are only reinforcing the idea that your dog is the dominant member in your household!

Does your dog stay calm during stressful situations? 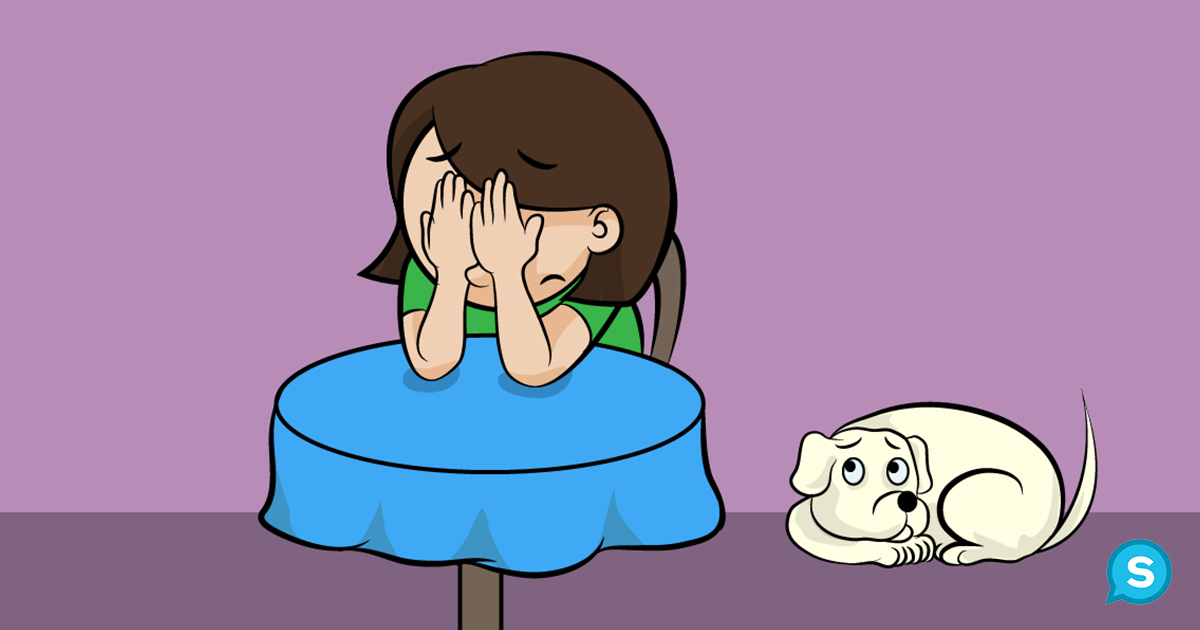 When it comes down to it, pack leader is not just a position of dominance— more than anything, it is a position of respect and trust. If your dog stays calm during stressful situations, it means that they know you are there to protect them, that you are their trustworthy alpha.

One of the best ways to keep your dog calm is by staying calm, cool, and collected yourself.

Sport Dog Training Center affirms, “The alpha is not the biggest and strongest. The alpha is the smartest and the one who can remain calm under pressure. “

Does your dog let you walk through the door first? 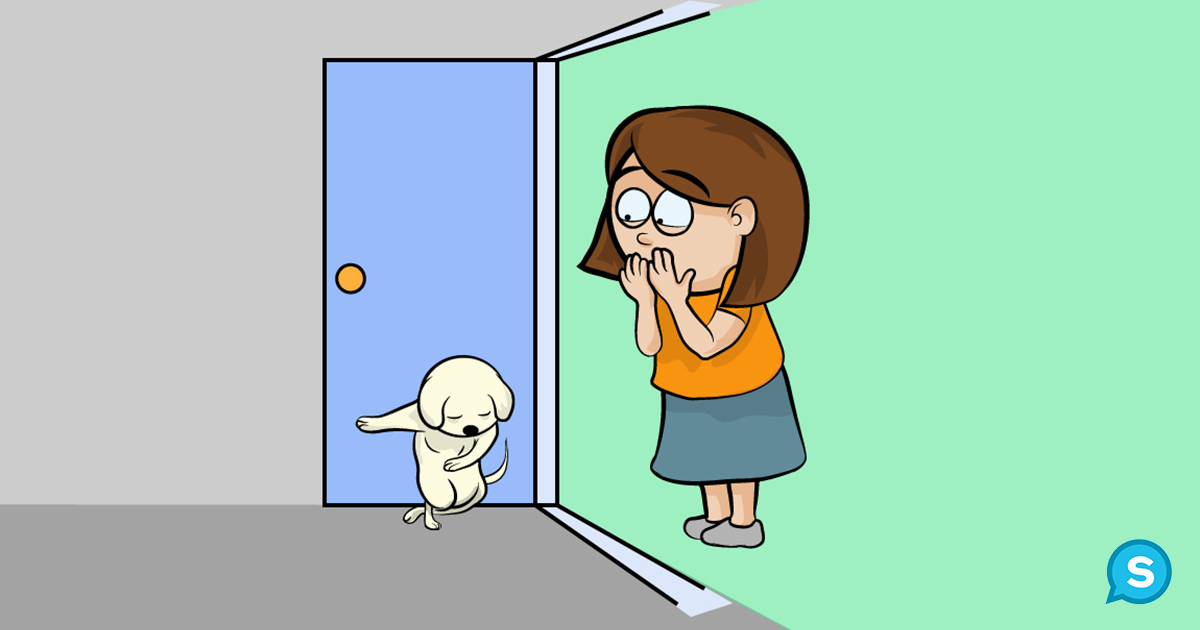 If your dog lets you walk through the door first, it is a sign that you are in control of the “pack,” according to VCA Hospitals.