Years back, we told you all about Duncan Lou Who, the two-legged boxer whose deformity didn’t stand in the way of his spirit or his loving nature. Born with rear legs that were fused together, the vet gave his owners two options: euthanization or amputation. They went with the latter and neither they, nor Duncan, ever looked back.

“We let him heal and strapped him to a wheelchair but he looked at us like we were crazy,” Walters told the East Idaho News. “He tried to lift it and walk so we ended up taking the wheelchair off and letting him do his thing.”

Duncan has been doing his thing ever since.

He’s appeared on TODAY, Queen Latifah, has over 122,000 Instagram followers and his first trip to the beach was viewed nearly 7 million times on YouTube.

But what happened last week was a whole new level of crazy.

Walters, Giese, their two children and three dogs were traveling south on U.S. Highway 20 from Yellowstone National Park to a cabin in Island Park. Their teenage son was driving and at the Montana-Idaho border, tragedy struck — a bison on the road surprised them and the impact was intense, spinning their truck, which then hit two poles and flipped several times.

Miraculously, nobody was seriously injured. But the dogs were all missing.

One was found immediately. Another was discovered unharmed an hour later wedged underneath the truck. But there was no sign of Duncan.

“I thought Duncan was dead,” Walters says. “I thought he was in the bushes either dead or hurt with a broken leg, broken back, something.” 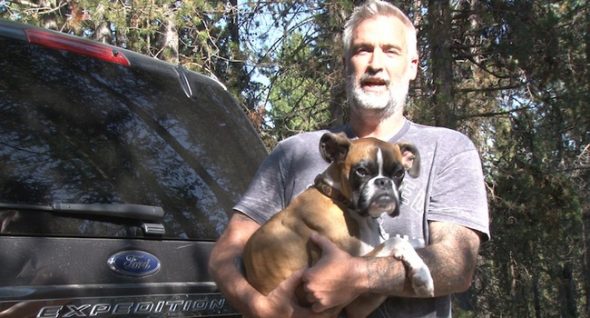 Emergency and power crews arrived and once they said the scene was safe, the search for the beloved dog began.

“All the EMTs, all the officers and people who had stopped were all helping me look through all the brush,” Walters says. “We had flashlights and we were looking everywhere. We just couldn’t find him.”

Giese and Walters are the founders of Panda Raws Rescue, a nonprofit organization that helps special-needs animals. They shared a post on their Facebook page and word quickly spread that the Duncan was missing.

The group searched for hours, and when they were unable to find any sign of the dog, Walters says they realized he had likely survived the crash and ran off. Then, later that afternoon, Giese got a call. A man at a quarry three miles away had spotted a two-legged dog. They raced to the scene.

After a 90-minute search, they found him. Giese’s daughter, Jade, cajoled him to come with a cookie. 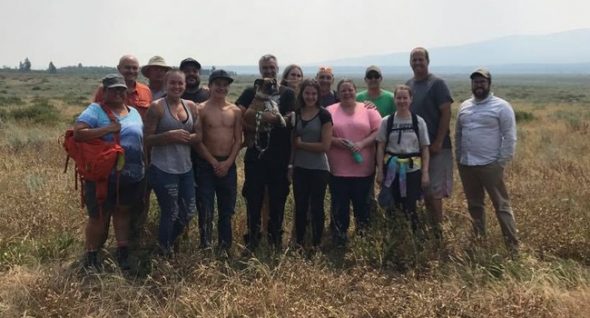 After 17 hours of searching and worrying, the family was reunited.

“I can’t even explain what it was like because I didn’t think I was ever going to see him again,” Walters says. “We would have stayed a month or two months until we found him dead or alive beause he deserves that.”

Despite a few bumps and bruises, Duncan is doing OK. He’s a little timid, but Walters believes he’ll be back to normal before long.

“After Duncan was thrown from a car, ran three miles and survived bear and wolf and whatever else could have eaten him, he is absolutely fine,” Walters says with a smile.

The family plans to finish their vacation and hopes to return to Yellowstone and east Idaho again one day.

“The gratitude is immense,” Walters says. “I literally wish I could go to every single person and hug them and thank them. Social media gets such a bad rap, but in this case it helped save his life. He’s a special dog, this is a special community and we are very thankful.”