Last week David King was losing his battle against cancer, but the nurses in his Missouri hospital made sure he didn’t leave this world without saying goodbye to his beloved pet Yorkie.

King’s granddaughter, Ellie Miguel, tweeted their final goodbye and in the days since, the sweet farewell has gone viral. 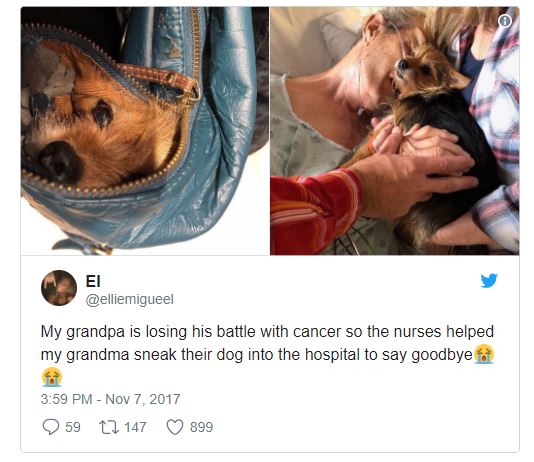 “My grandpa loved his dog Lil Fee; she would follow him around everywhere. He would bring her everywhere he could,” Miguel told Yahoo Lifestyle. “My grandpa had been battling cancer for the past couple years, but last week it took over his whole body. He spent about a week in the hospital, and my grandma brought pictures of the dog to hang up.”

The nurses, she said always heard her grandmother, Cindy, talking about Lil Fee.

“So they encouraged her and helped her get the dog in. They had my aunt carry the dog in a really big purse,” Ellie said.

Before her grandfather passed, he was able to say a proper goodbye. Miguel said it was emotional, but unforgettable.