Intersections in many major cities in Asia are incredibly dangerous, many with no signals.  A woman and her dog were crossing one on her motorbike when a man in a car struck them.  The little dog chased after the car and returned with the man to make sure she was ok.

The collision occurred on May 24th in Zhangjiagang in China’s Jiangsu Province.  The woman was knocked from her bike, and fortunately, it was not a hit-and-run.  The man driving the dark vehicle stopped, but the dog couldn’t know what the man’s intentions were, and it dutifully chased after the car and stood in front of it, preventing the man from getting away.

The woman was lucky enough to only sustain a few bruises, and the dog did not appear to suffer any injuries at all.  She says that the dog has been her companion for years, and has always been very protective of her. 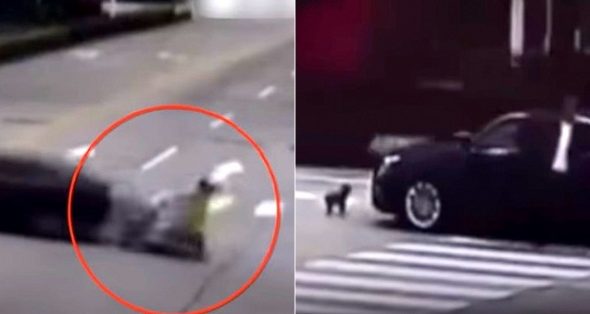