In Iowa, members of the Decorah Fire Department completed a special rescue mission as they risked their lives to save a dog.

While camping in Decorah on Wednesday, a good time quickly took a turn for the worse after the family’s pup fell over the side of a cliff. The family rushed to call 9-1-1 for assistance. The firefighters who arrived on scene were able to capture the amazing rescue on camera.

Luckily, for the poor dog and the family, the Decorah Fire Department had recently in the last 2 years been trained to conduct such a rescue mission.

“This is what we’ve trained for the last year and a half. We’ve practiced and it was time to put that practice into motion,” said fire chief Mike Ashbacher.

The department had only just invested in equipment and training for their crews to learn high angel, rope rescue operations.

The rescue team arrived on scene and quickly took action to save the dog who was stuck on the side of the bluffs in Palisades Park.

“When we pulled up, one of the kids asked, are you here to save my dog?” Ashbacher recalled. 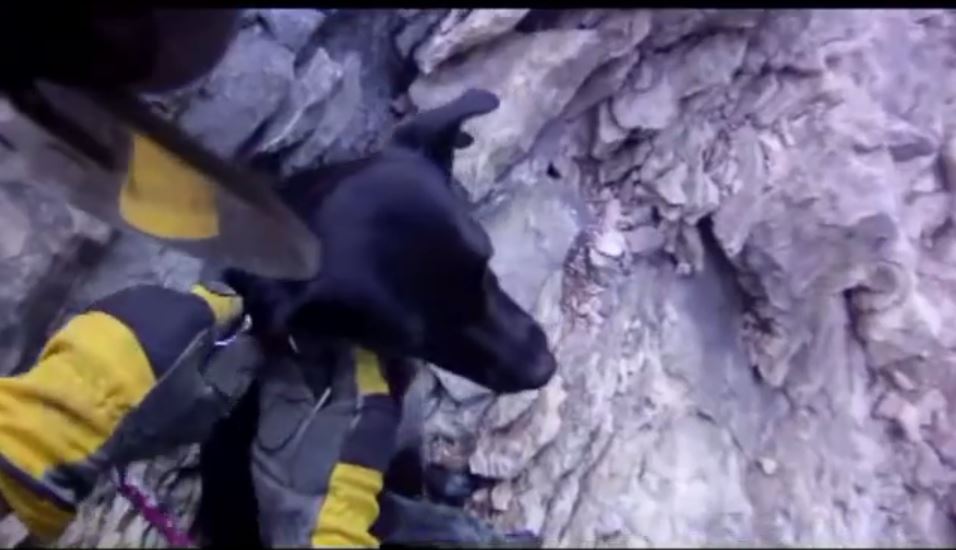 When the group of firefighters first looked over the bluff, which stands about 100 feet, they were surprised to not see the dog at all.

“Where’s the dog? He’d gotten around the corner of an overhang. So we couldn’t even see him from the lookout. We had to get over before we could assess what we had. Then it was like, we gotta get moving!” said Kurtis Johnson, the volunteer firefighter who filmed the rescue.

“We still don’t know how the dog got to where he was. That’s just a bad spot. But when Kurtis got around the corner and saw what the situation was, he said, this is going to be tougher than what we originally thought,” said Ashbacher.

While some people may find it crazy that firefighters would be willing to risk their own lives for a dog, but there was no question in their minds – they understood that this dog was a special and important part of the family.

“It’s not so much a family pet, it seemed like a family member. It wasn’t something you just walk away from,” said Johnson.

“To us, it doesn’t matter if it’s a pet or a person, a member of the family. We’re going to put forth the effort no matter who it is,” Ashbacher agreed.

The firefighters handled the situation with calm demeanours to prevent frightening the dog, who was already extremely nervous. Only six minutes after starting the rescue mission, the pup was returned safely to his family.

“I can’t say enough how proud I am. We’ve been in fire situations before, but this was something new to us. And for everybody to perform the way they did, I thought it went well,” said Ashbacher.