You’ve seen it a million times:  a dog gets stuck in a tree, a heroic fireman brings his trusty ladder and climbs up, rescues the dog, and the whole town, who has gathered below, erupts into cheers and applause.   Wait…. that’s cats!  They do that for cats.  Dogs don’t get stuck in trees…. Especially not Great Danes!

That’s why the Plattsmouth Fire Department in Nebraska didn’t immediately believe the caller who told them that a 120-pound dog was stuck 20 feet up on a tree. 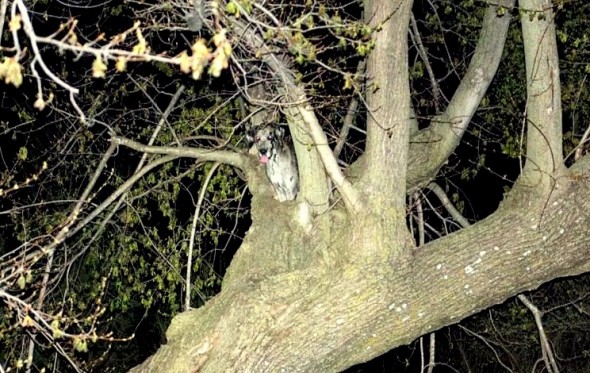 “We kind of looked at each other,” said Lieutenant Jon Hardy. “They can’t be serious.”

But when they arrived on the scene, sure enough, they saw Kora, who is three quarters Great Dane and one quarter Mastiff, perched on a large tree branch.

When her owner got home from dinner, she was surprised to not find Kora.  But she could hear her whimpering, and followed the sound to her backyard.  It is likely that she chased a raccoon up there. 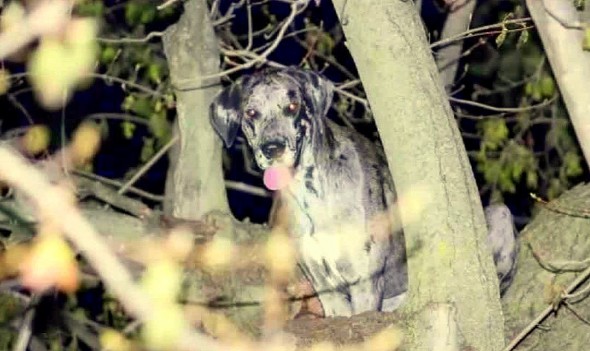 Over a dozen responders came to help get the lumbering beastie down.  They wanted to put a leash or harness around her, but Kora wasn’t having it.  The team held a tarp below the branch in case she fell, and it’s a good thing they did.

Kora plummeted from the tree and gracefully landed on the safety net.  It was barely down before she took off to her house, glad to have all four paws back on solid ground.

“She never hit the ground.  It worked like we hoped,” Hardy said.  “I’ve been doing this 12 years and this is the first dog we got out of a tree.” 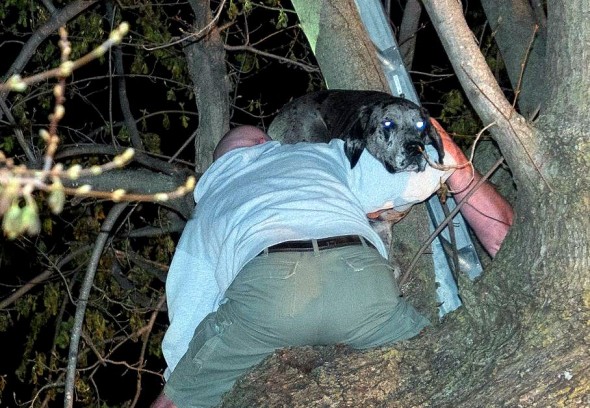