Harley has had quite the adventure, one neither he, nor owner, Shane Hale, are likely looking to experience again!

Hale and Harley were happily reunited this week after the small pup fell overboard while sailing in the Gulf of Mexico last Saturday night. The pair was on their way to Key West, sailing about three miles off the coast of Englewood, FL (just north of Fort Myers) when a nasty storm blew up.

Somebody is super tired!!

Hale told reporters that Harley was wearing a life jacket that was attached to the boat with a tether, bbut apparently slipped out of the flotation device once he fell into the water.

He posted about the tragedy on social media and – miracle of miracles! – found out the next day that Harley had made it to a nearby beach! The little dog made the three-mile journey on his own. He picked up a mild case of pnuemonia, Hale said, but is otherwise healthy and happy! 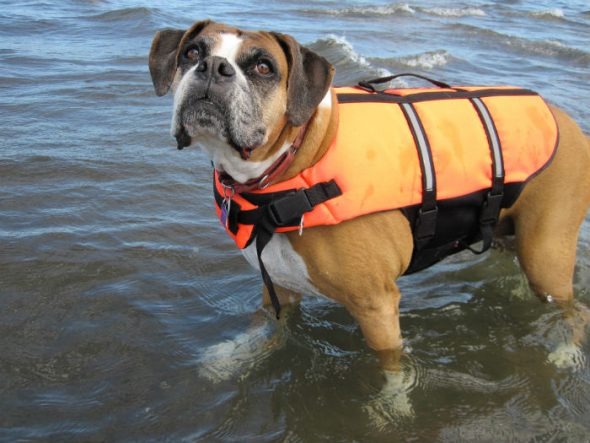 There’s no firm data on canine drownings, so we can look at human statistics. Per the U.S. Coast Guard, drowning is the leading cause of death in boating acccidents – and in more than 80 percent of cases, victims were not wearing life jackets.

Dogs aren’t just prone to excited and unexpected voluntary leaps from your boat or dock. They can easily slip and fall due to the rocking motion. And just because your pup knows how to swim doesn’t mean it’s safe, either. Per the stats, most human boating accident victims know how to swim, too, but can drown due to injury, unconsciousness or hypothermia (any of which can affect a dog, as well).

So if you’re in the market for a dog life jacket, here’s what to look for:

FIT: It should be snug, but comfortable, allowing for good range of motion for both neck and legs.

HANDLE: Durable enough to lift your dog up out of the water. A tether is recommended no matter your dog’s size, but especially if you’d be unable to get the dog out of the water yourself.

COLOR: Bright! This will help with visibility. Reflective properties are a great idea, too, if you might be on the water after dark.

FLOTATION: Make sure there is a pad under the dog’s chin – this will help keep the head above water if he’s unable to do it himself – and one in the abdominal area, which will provide extra buoyancy!