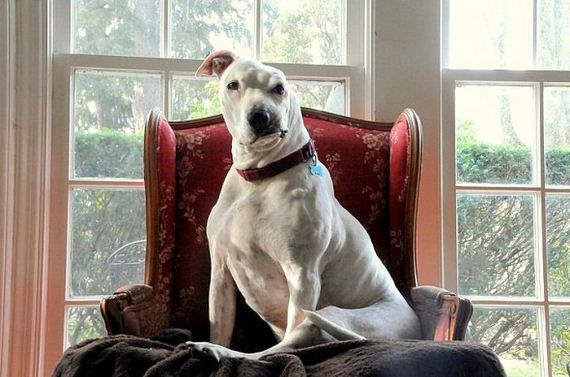 Oogy became a celebrity in 2008 when he guest starred on Oprah, and went on to become the subject of a book in 2010. He started out life as a bait dog left for dead, but ended surrounded by family members who absolutely cherished him for the last 12 years.

Larry Levin and his 12-year-old twin sons had just said the painful goodbye to their 17-year-old cat Buzzy at the Ardmore Animal Hospital in Pennsylvania when they met Oogy. The badly disfigured pup had been brought in by police who saved him during a drug raid.

“The whole left side of his head was bright-pink scar tissue and looked like it had melted,” Larry told Dogster.

No one knows for certain exactly what happened to the puppy, but it is presumed that he had been used as a bait dog and then left to die at the drug house. Despite his horrific abuse, Oogy was still full of love, and was happy to cover the twins in kisses. 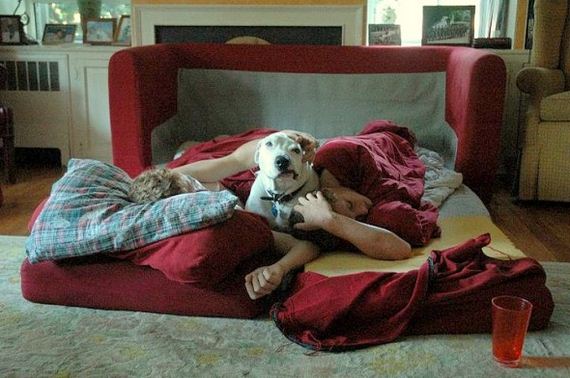 The Levins adopted Oogy, and became bully breed advocates.  They were surprised to find out that Oogy was actually a Dogo Argentino, but that didn’t make a difference when Larry submitted his testimony to a website devoted to victimized dogs.

Oogy’s story quickly went viral, and in 2008 a producer from The Oprah Winfrey Show called to invite them to make an appearance on a Valentine’s Day broadcast.  Larry was thrilled to have the chance to share Oogy’s story, but he knew the only way of getting him to the Chicago studio was to drive.

Ten days after Oogy’s television debut, a literary agent called about a book deal.  Larry had always wanted to write, and this was the perfect opportunity.

“I spent two years writing it,” he said. “They basically gave me as much time as I wanted, or as I needed.” 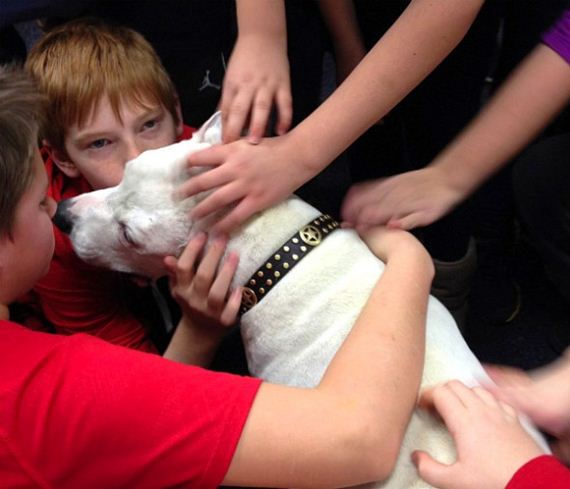 The book became a bestseller, and Oogy rose to stardom in the dog world.  The book allowed Larry, along with Oogy, to become involved with rescue fundraisers and be a guest speaker at schools.  Kids would learn about Oogy’s sad beginnings, and take up collections for non-profit and rescue groups.

Over the years, Oogy was able to make fewer public appearances because of his health.

“He went through three operations on his skull – the first one to save him and the second one to rebuild his face,” Larry said.  “Then in 2011, he collapsed. They thought it was a brain tumor.”

It wasn’t a brain tumor, but a pervasive infection that required a third surgery. 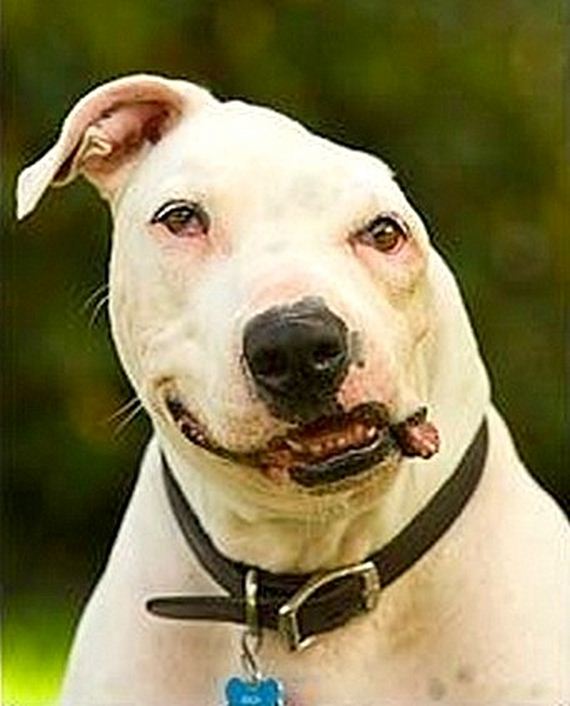 “Inside his skull, pieces of fur and pieces of his cheekbone from nine years before had become infected. They cleaned it all out, and he survived.”

Oogy was still able to make trips to a nearby prison, where he and Larry were volunteers with New Leash on Life USA, which has inmates learn about dogs and train them so they’ll be more adoptable. Larry would talk with them about dog-fighting.

“They go back into the communities where dog fighting is endemic, and they’ve got this changed view,” he explained.

Larry hates what happened to Oogy, but is glad that it brought them together. 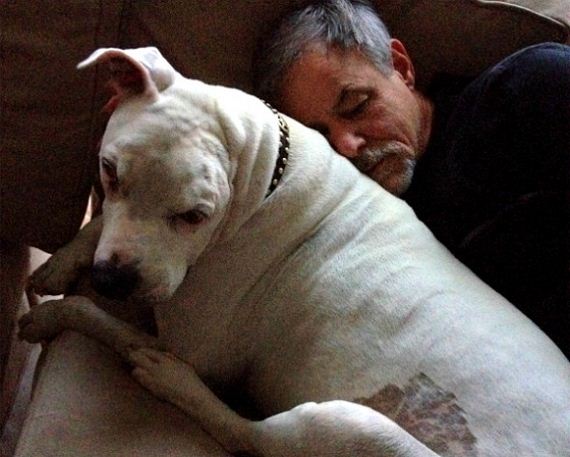 This is especially true now that the twins have grown up. On March 2nd, Larry shared the sad news with fans on Oogy’s Facebook group that his wonderful boy was gone.

Noah came down from Boston Friday as soon as I called him. Dan pulled a mattress from the second floor –Oogy hadn’t been able to navigate the steps for a long time now– and the four of us spent every minute of the weekend together, sleeping in the family room, eating there, watching movies, going out for short walks. We covered Oogy with kisses. He kissed us back. 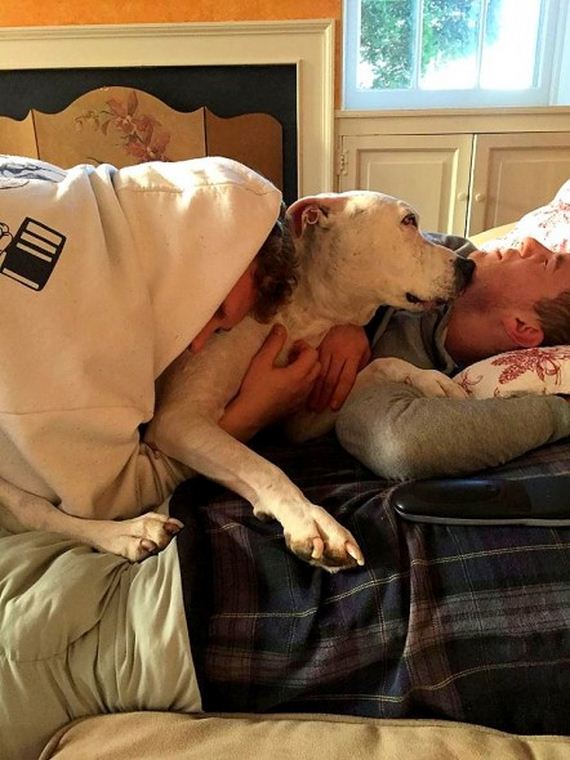 This morning I fed Oogy a bison filet. I put moisturizer on his big fat nose and drops in his eyes so they wouldn’t itch, just like I do every day, and I put his warm orange coat on him, the one that Linda gave him, and we went for a ride. He was 100 years old and kept our spirits up through the whole ordeal but he’s gone from us. He didn’t suffer. We went through so much together and I can’t tell you how much he meant to me. He gave me the life I have. He brought me joy every single day for the last 12 years. Every single day. Think about that.

I know this profound sadness is inevitable, and I don’t know how the hole will be filled, or even if it can be, but I wouldn’t have had it any other way. Your love was essential to him, and he loved you with that unquenchable love that was his essence. Thank you from bottoms of our collective hearts. Hopefully this page will continue to help animals in need. I will be back as soon as I can. 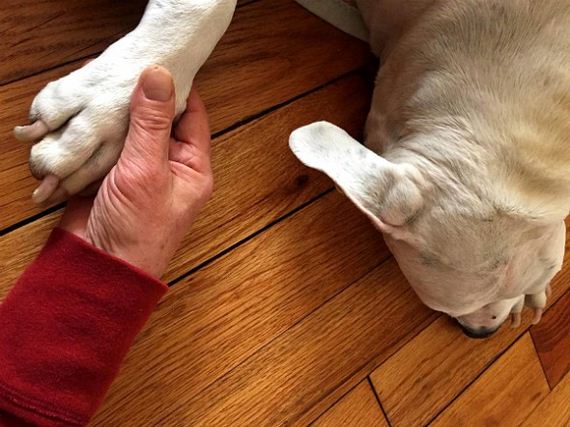