Perhaps because of her own past, so rife with abuse, Peanut could sense another innocent in desperate need of help, because this former Michigan shelter dog is being hailed a hero today.

She is being credited with finding a naked 3-year-old girl curled up and shivering in a ditch near her new home, Delta Animal Shelter officials told M Live. 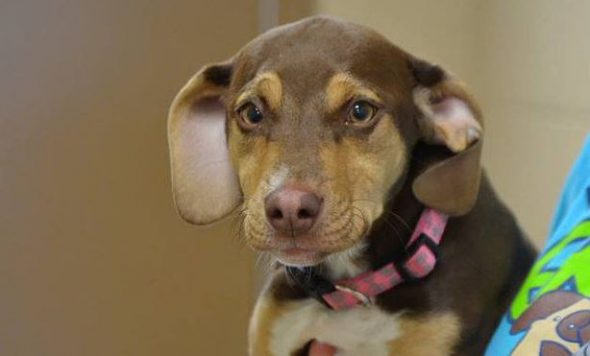 One of the dog’s owners found the girl, wrapped her in a sweatshirt and rushed her to his home before calling authorities.

“Thanks to Peanut, a little girl’s life was saved today,” a woman wrote to Delta Animal Shelter, which shared the story on its Facebook page.

The girl was rescued on the morning of St. Patrick’s Day.

The woman, who wasn’t identified, said that her dog “started going crazy at our house. She was running up and down the stairs, barking and yelping.”

The dog then went into the garage, where the woman’s husband was working. Peanut alerted him that she wanted to go outside. The husband had heard the dog running around but couldn’t figure out why.

“He let her outside and she went barreling into the field behind our house at full speed,” she wrote.

“My husband followed her and to his surprise, he found a naked, shivering, 3-year-old girl curled up in a ball, barely alive.”

She said he covered her with his sweatshirt and brought her inside. He called 911.

“The little girl was barely hanging on for her life. By the time the ambulance and police arrived, the little girl could only say one thing – ‘doggie,’” she wrote.

She said that the dog has been a blessing to her family.

“As you know, her background was so heartbreaking and we are so happy that we were able to take her into our home and give her the love and the family she deserves,” the woman said.

In her former life, the Peanut’s name was Petunia. She was brought to the shelter with two broken legs, broken ribs and a stomach full of carpet.

The former owner was recently convicted of animal abuse, the shelter said.

“Petunia has a great new home with a wonderful family….and this formerly abused dog has now Saved the life of a little girl,” the shelter wrote.

The shelter did not identify Peanut’s new family.

They contacted Child Protective Services workers, who took custody of the girl and another young girl in the home.

Police said the temperature was around freezing at the time the girl was found and have referred the reports to prosecutors.