Beagles are well known for their practiced noses. And its not uncommon for travelers passing through the Hartsfield-Jackson Atlanta International Airport to see them employed as agriculture detector dogs, putting their nuanced noses to work sniffing luggage to keep potentially harmful food products and pests from entering the United States. 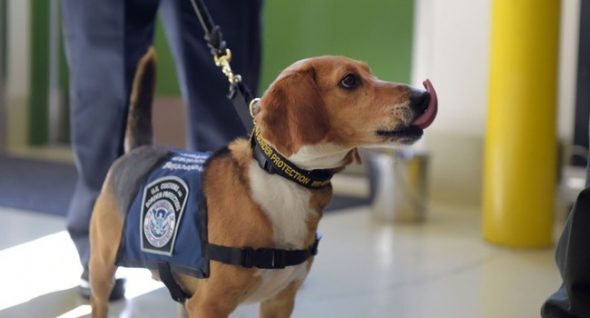 Naturally, members of Atlanta’s Beagle Brigade go through extensive training before graduating into their positions, but the pack’s newest member has already met some grave challenges on his life path.

Murray is 3 years old and in a few weeks, he’ll be a full-fledged member of the Beagle Brigade, but a year ago his life was very different. He was rescued by Alcovy Pet Rescue, Inc. from the Northeast Georgia Animal Shelter, which intakes about 3,000 animals every year.

“He was very eager for love and very eager for attention,” Tammie Jourdanais, the shelter’s director, told the Atlanta Journal Constitution. “He was scared and timid and everything like that, which is probably from being stuck in a small cage or kennel and not (being allowed) to socialize or (being) paid attention to,” Jourdanais said.

Murray has a short tail, but it wasn’t always that way. Most of it had to be amputated when he came into rescue. Someone had tied a band very tightly, cutting off the circulation. Jourdanis believes his former owners may have been attempting to dock (or cut) Murray’s tail off without paying a vet to do it.

In Georgia, tail docking by anyone other than a licensed vet (which is required to be done with a pup is between three and five days old) is illegal.

Half of one of Murray’s ears was gone, as well. The injury, whether intentional or accidental, will likely always be a mystery. Each of his wounds was tended in rescue, though, and that’s also where he began socialization. 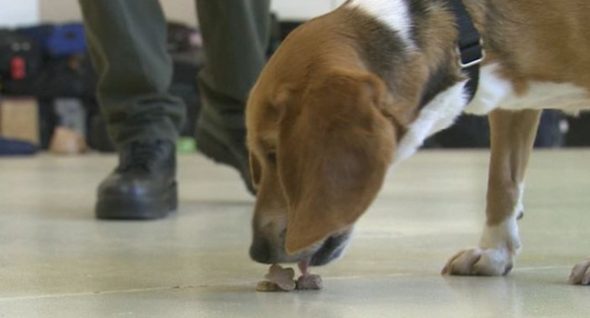 “We socialized him with other animals, and we pretty much just loved on him, so he’d know that not all people are bad people,” Jourdanais said.

His injuries were too severe to allow for adoption right away, and after the shelter posted on Facebook asking for help for Murray, the folks from Alcovy Pet Rescue drove to the shelter to help rescue him.

“When a plea like this goes out on Facebook, it’s up to the rescues to step up, go get the dog and make sure he’s taken care of and (gets) ready for adoption,” Alcovy staffer Claudette Towe said. She fostered Murray for about for about a month.

“While he was at my place, he was so food motivated,” Towe said. “He would get into all the cabinets, trying to find food — you know, he was so skinny when he first got to us. I saw what a great nose he has.”

And so Towe called Kathleen Warfield, a training specialist at the National Detector Training Center. It would change the course of Murray’s future.

“The dogs we’re looking for are working dogs that really need something to do,” said Warfield, adding that the organization acquires most of its dogs from rescues, shelters, humane societies and animal control.“They need to keep busy and be active.”

“He’s the happiest dog you will ever meet,” Warfield said. “When he’s at the airport, he just loves being in that environment.”

The detector dog program was established by the USDA in 1984, a team of beagles located in the Los Angeles International Airport. They were lovingly named the Beagle Brigade.

“People aren’t intimidated by beagles at the airport, where if you brought in a German shepherd or bigger dogs, they are,” Warfield said. “These dogs have to work very closely around the passengers if they’re coming through international airports, checking their bags and carry-ons.”

Dogs go through an evaluation process to see how they acclimate to their future work environment within an airport. This is where trainers see how they deal with lots of noise and being surrounded by people.

After that, comes a four to six-week training period earlier this month along with three other dogs. His classmates are headed to Boston, San Francisco and Baltimore, but Murray is staying in state and will work at Hartsfield-Jackson. He’ll be sniffing bags, boxes, anything coming in with passengers or on the baggage belt to make sure there’s no food, fruit or meat items that could have pests or diseases that could harm American agriculture 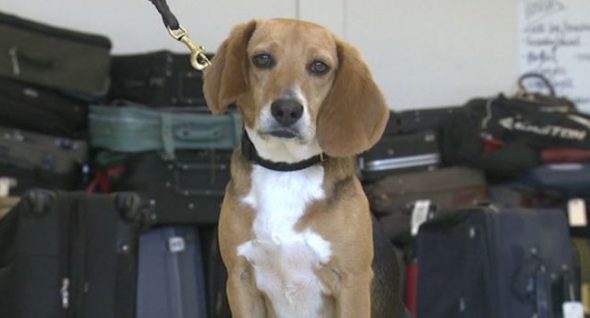 U.S. agriculture accounts for more than $1 trillion in annual economic activity per the USDA. Approximately 1.7 million materials were quarantined in 2016 by these detector dogs and more than 60,000 harmful pests were intercepted.

“They save time, a lot of money and our food sources, so they’re very, very important,” Warfield said. “And we love them (laughs).”

While the work is important, Warfield noted it doesn’t feel like work to the dogs. It’s more like playing hide and seek.

“It’s like a game to them to find that particular odor, and then they get rewarded with a treat, so they have to be very food motivated — Murray is definitely that,” Warfield said.