When Nick Franco and Kari MacDonald lost their beloved Labrador, Buddy not that long ago, they knew that they would eventually adopt another dog, but they weren’t really quite ready just yet.  They decided that they would give fostering a chance first, and that’s when they met Benny.  The dog that would start out a foster project, but end up a whole lot more. 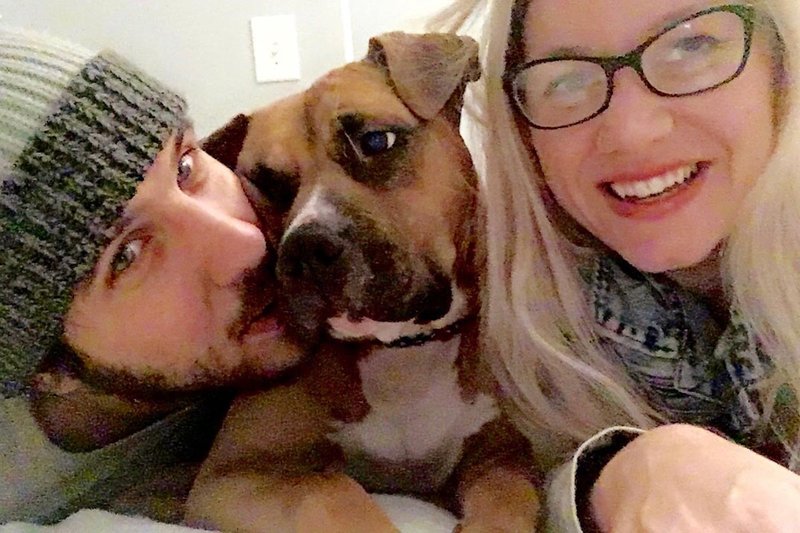 Benny had been with the Pennsylvania SPCA since his former human was arrested, and he was taken away from him.  His former human was awaiting trial on dog fighting and animal cruelty charges, and after a long two years, Benny was finally eligible for adoption.

Benny came home with them on November 7th, and began to settle into his new life.  A life that included long walks, snuggles and good food.  Benny still needed some time to adjust to a more “normal” dog’s life, but once the time was right, Nick and Kari were going to make sure that he would go to a really great forever home with a family that would promise to love and take care of him forever.

Exactly one month after bringing him home, the three went on a walk to the grocery story.  Nick was going to be celebrating his 30th birthday, and they needed ingredients for his favorite meal, vegan French toast.  Once they were almost home, Benny started to act strange.  He began sniffing around outside, like someone he didn’t know was there.

Benny was on full alert y this point.  Nick said that it was pretty clear that someone had broken in to their home.  Things just looked like they may have slipped off a table and onto the floor, which Benny was mistaking for someone being there.  However, after going further into their place, they could that a lot of their stuff had been moved around, like someone was searching.

After just a few more minutes of looking around inside, Benny pulled Nick over to the stairs by his leash.  Someone was definitely up there, and Benny knew it.

“My dog is coming up – I don’t know what he was going to do,” said Nick.  While he was saying this, Kari was on the phone with the police.

The burglar decided that he would make a brake for it, and jump out a second-story window.  He left the backpack that he was filling with Nick and Kari’s items, and even tried to steal Buddy’s old cancer medication.  However, the dirt bag not only left a fingerprint behind, ut also had a good shot of his face caught on surveillance cameras not far from the home.

“We like to think that Buddy sent Benny to us,” he said.