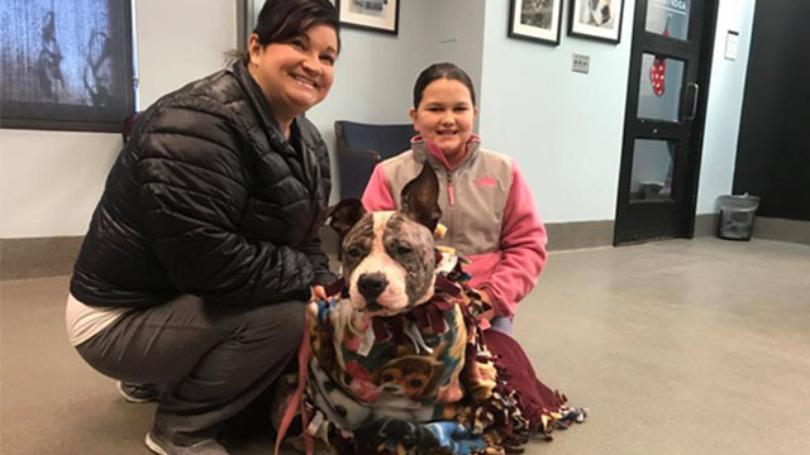 “Thank you to everyone for loving her along the way,” Richmond Animal Care and Control said on Facebook. “If this wasn’t awesome enough, the family that was our last adoption of 2017 sponsored the first adoption of 2018 which turned out to be Penelope!”

A neighbor on N. 33rd Street in Church Hill was leaving for work when she spotted the dog shivering in some bushes on the street. After seeing the dog’s condition, the woman called animal control officers.

RACC said they suspected that the pit bull, estimated to be three or four years old, had been abused in dog-fighting. The case is still under investigation.

“Penelope is the poster child for the work our shelter does every single day,” said Director Christie Chipps Peters. “We rescue animals from terrible situations, work hard to rehabilitate and provide medical care and then strive to find a great forever home. We are thrilled that we could be a part of this sweet dogs life at a time when she needed it most. Additionally, we are so very grateful to everyone that supports our city shelter.”

The organization said that in 2017, for the first time in its history, there was enough funding for every life-saving surgery needed by the animals in their care.

Last year, RACC was only able to help 68% of the animals that were brought to them.

“Neglect, we see animals that are injured, animals hit by a car, thanks to this foundation we were able to cover the emergency care of any animal in need in the city,” said Robin Young, RACC outreach coordinator.

“Because of you we funded 71 medical repair surgeries, 7 trips to the neurologist, 11 surgeries/treatments at the animal eye center, 32 heartworm treatments, 2 trips to the cardiologist and one to a dermatologist,” the agency wrote on Facebook. “Your ongoing support through donations, social media sharing and word-of-mouth has enabled the Foundation to reach new levels in its support of RACC this past year.”

They also funded over 1,300 hours of on-site behavioral training and assessment services, to help make sure that each of the dogs and cats in RACC’s care found the right home.

While RACC is thrilled to reach this milestone in 2017, Young said they will still need support in 2018.

“It’s a continual need, everyday; we don’t know whats going to come through our doors.” she said. “So 2017 was a great year but… we always need donations to keep this going.”