For two nights, mutts of all shapes and sizes strutted their stuff and won the hearts of the judges and viewers as they competed in the 3rd American Rescue Dog Show.

The Hallmark Channel aired the adorable show and separated the dogs not by breed but by their unique characteristics. This year’s categories were: Best in Belly Rubs, Best in Couch Potato, Best in Ears, Best in Senior Dogs, Best in Snoring, Best in Special Needs, Best in Talking, Best in Underbite, Best in Wiggling, and Best in Wrinkles. In addition, one dog was named Best in Rescue. While many rescue dogs took home titles, the big winner of the show was Sugar. 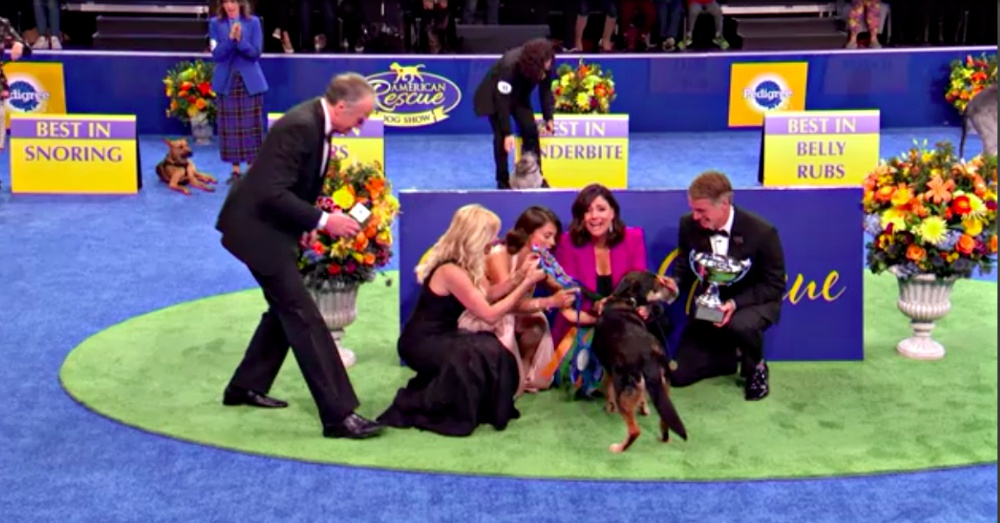 Sugar was surrendered to the rescue The Furgotten with three puppies on her side. She was a great momma and eventually all the puppies found homes. However, Sugar remained in a foster home for a year waiting to be adopted. She finally met her person, Kimberly, another foster for the rescue that instantly fell in love with her. 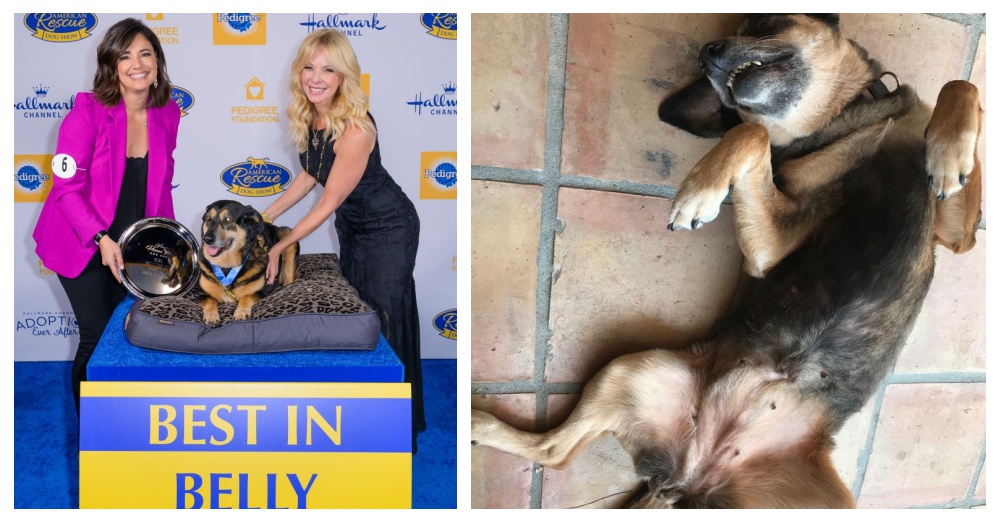 At this year’s show, Sugar claimed not only the title for Best in Belly Rubs but won the Best in Rescue as well. Her first title awarded her rescue with $5,000 and her second one brought in $30,000. Her mom is so proud and said a fun fact about Sugar is that she is a big flirt with male dogs.

In case you missed the most adorable dog show on television, here are the other winners along with their bios. While the competition was fierce, these rescue dogs were named top dogs in their categories and earned $5,000 in grants for their rescues. 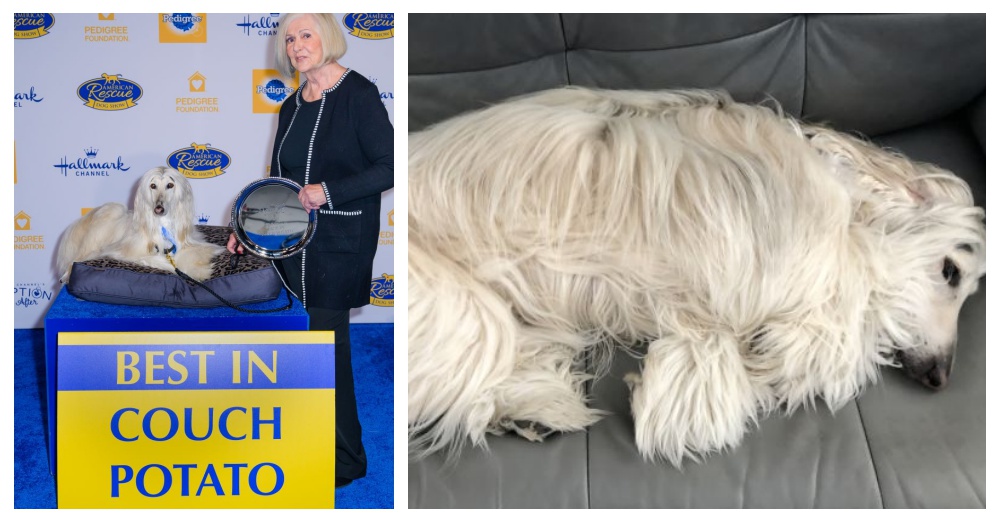 The Best in Couch Potato went to Spencer rescued by Afghan Hound Rescue Southern CA. Spencer was rescued from Korea and brought to California to find a loving family. His mom, Helen, said the sweet boy is nicknamed “velcro boy” because he never leaves her side. His favorite way to rest is sprawled out on the couch, which won him the title. 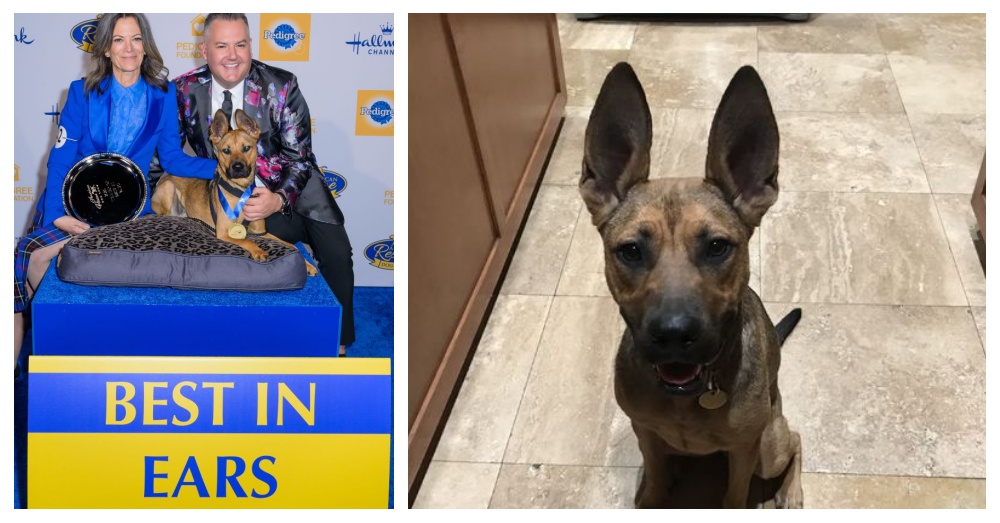 Daisy’s large ears are the first thing people notice about her and they won money for her rescue, MaeDay Rescue. However, her ears were not what attracted her mom, Heidi. Daisy found her forever home at an adoption event when she walked over to Heidi’s other dog, Rascal, and started playing. The two acted like old friends and got along so well that Heidi knew she needed to adopt her. Daisy’s ears are always up and can even touch together at the tips. 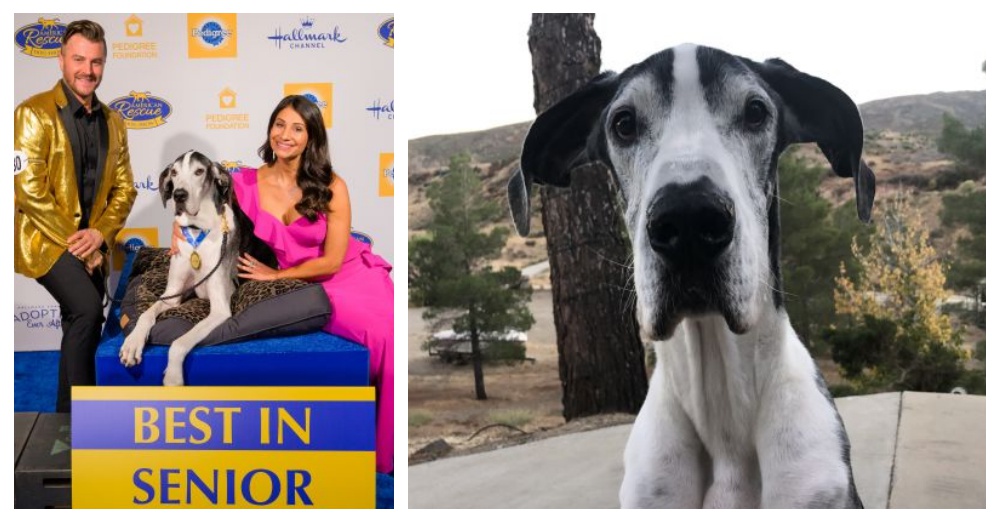 Best in Senior went to Goliath that was rescued by Reversed Rescue. The large dog was abandoned by his family but has thrived since finding his new dad, Tye. The two bonded and Tye says that Goliath has actually started to “age backwards and seem younger after recovering and that is purely magical.” Even though, he acts young he has the heart and soul of an old dog. Goliath, as his name suggests, is a large boy who has his own queen bed to sleep in and has yet to find a human taller than him. 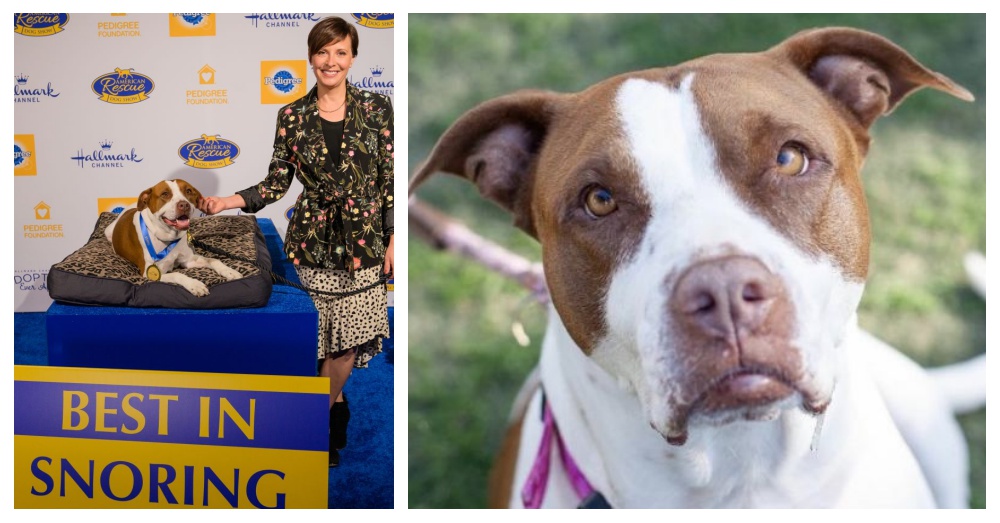 Faith who won Best in Snoring has many phases of her snores. “It starts out light and then goes deeper and deeper until the snores get very long and eventually the lips start flapping,” said her mom. The sweet dog was rescued by I Stand With My Pack and fostered until she met her person, Kyle. The two love to go on adventures but she shared that Faith loves to walk a block and then lay down for people to pet her. 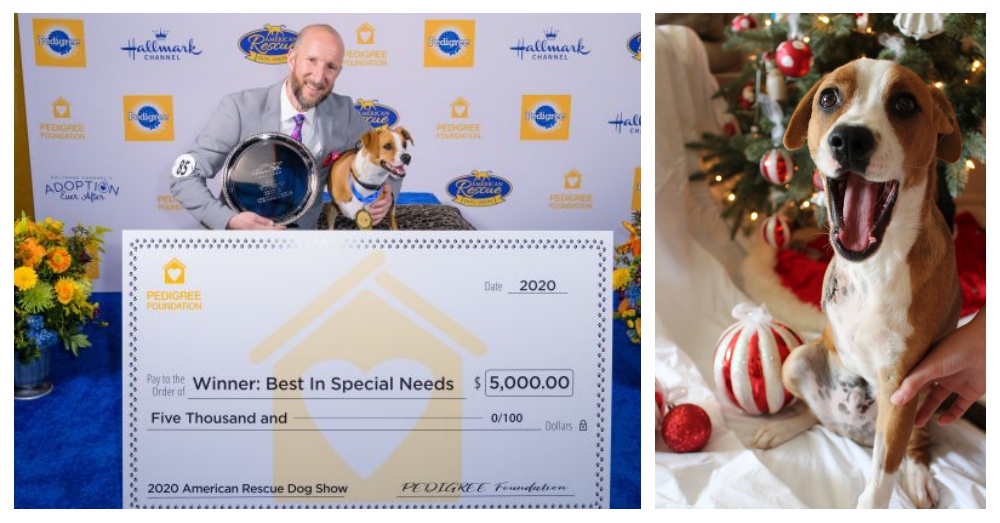 Best in Special Needs went to Champion who is missing one of his front legs. The sweet boy was immediately adopted by Dana and his family when he arrived at Helen Woodward Animal Center. Champion loves to go on adventures with his family and his struggles have given his family “so much perspective”. The loving dog greets people by standing on his hind legs waiting for a hug. 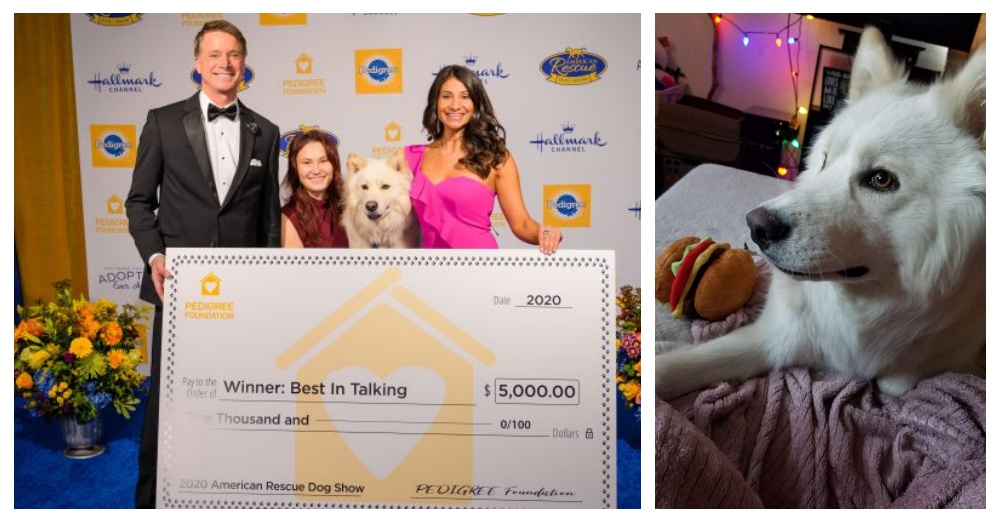 Maximus won Best in Talking, but to his mom he is more than that. The talkative dog helped his mom, Stefanie, recover right after he was adopted from The Ranch Rescue Team. Maximus is a friendly dog that even gets along with cats. In fact, his best friend is a cat. 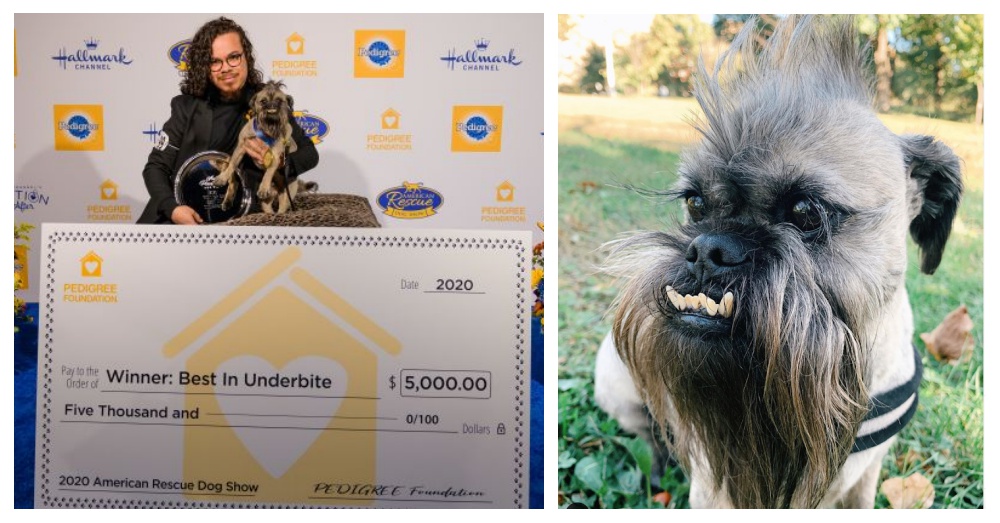 With a name like Ravioli, it is no surprise this adorable pup won. He was named Best in Underbite and his incredible underbite is admired by all who meet him. His dad, Carlos, rescued Ravioli from Animal Care Centers of NYC (ACC), and said when he walks him down the street he often hears “What kind of breed is that?” “He looks like a hyena!” and “Are those teeth real?” 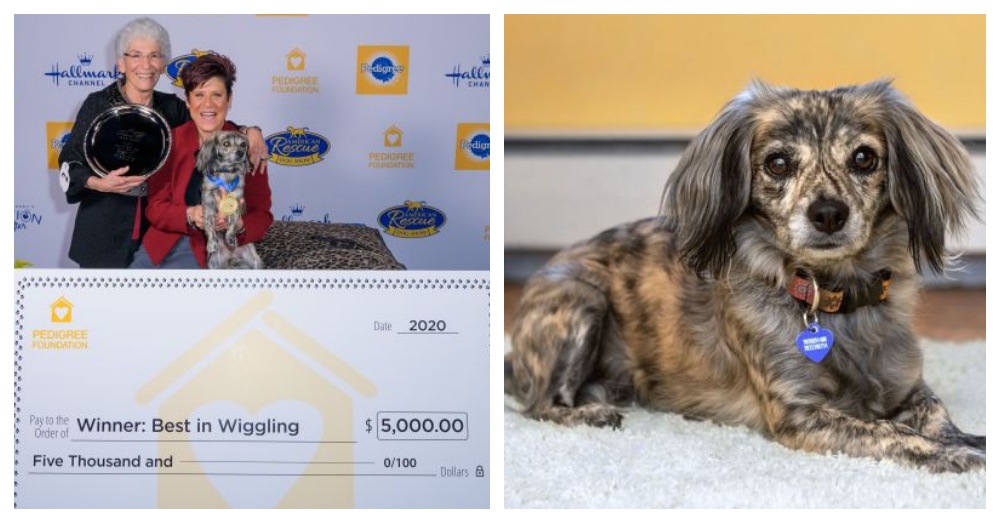 Best in Wiggle went to Maizy, who was rescued from the streets of Sonora, Mexico by Compassion Without Borders. Karen fostered Maizy which turned into a foster fail. Karen noticed Maizy wiggling with excitement that started to advance from a tail wag to a whole body wiggle. “That small wiggle kept getting bigger and bolder until it has now become a whole-body event that eventually turns into circles!” 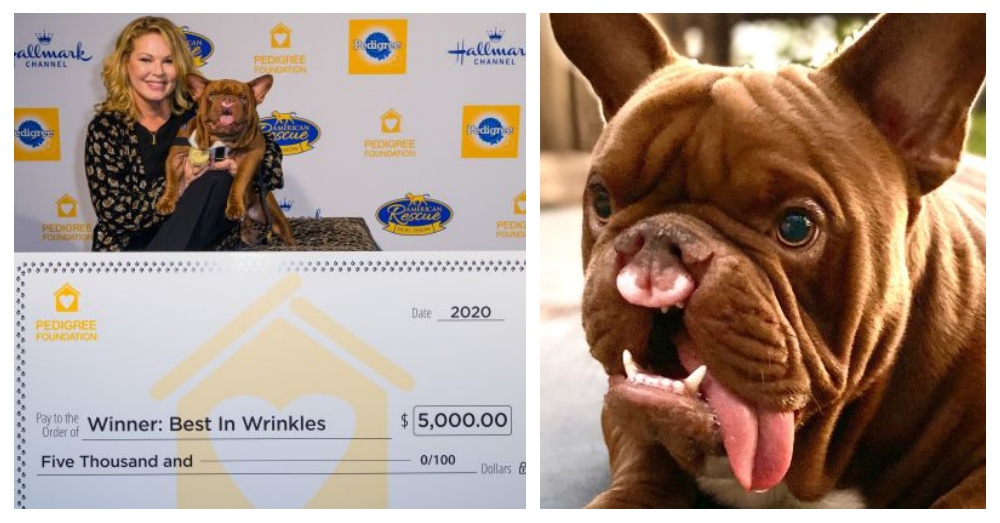 Big Rig claimed the title of Best in Wrinkles. He was surrendered to Road Dogs & Rescue with his brother when they were 5-weeks-old because they had cleft palates and could not be sold. Francoise saw a photo of Big Rig on the rescue’s Instagram and immediately went to adopt him. She patiently hand fed the little pup for eight months until he was able to eat and drink on his own. Now, the joyful boy loves to play with his older sisters and has over 8K followers on Instagram.

The best breed is rescued and thanks to Hallmark rescue dogs are being featured and admired just they way they are. Proving that imperfect is perfect. If you are looking for a best friend, head to your local shelter and adopt don’t shop!