A three-year-old German Shepherd tied up in the woods barked and barked for days hoping someone would hear her, and it finally worked. She had no food or water, just empty bowls and a plastic dog house to survive on. She had hoped her owner would return, but that never happened.

A nearby resident heard the dog’s cries for help and decided to report it to animal control. Alex Kelly, an animal control officer with New Jersey’s Irvington Township, received the call and asked how long the dog had been barking. The woman said, “I’m going to be honest with you, the dog’s been back there at least three days,” according to The Dodo. 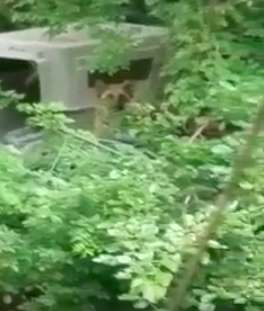 Alex rushed over as quickly as possible to meet the resident, but they saw no dog when they investigated and searched the area. Then Alex spotted a brown head peeking over a thicket from across the river. 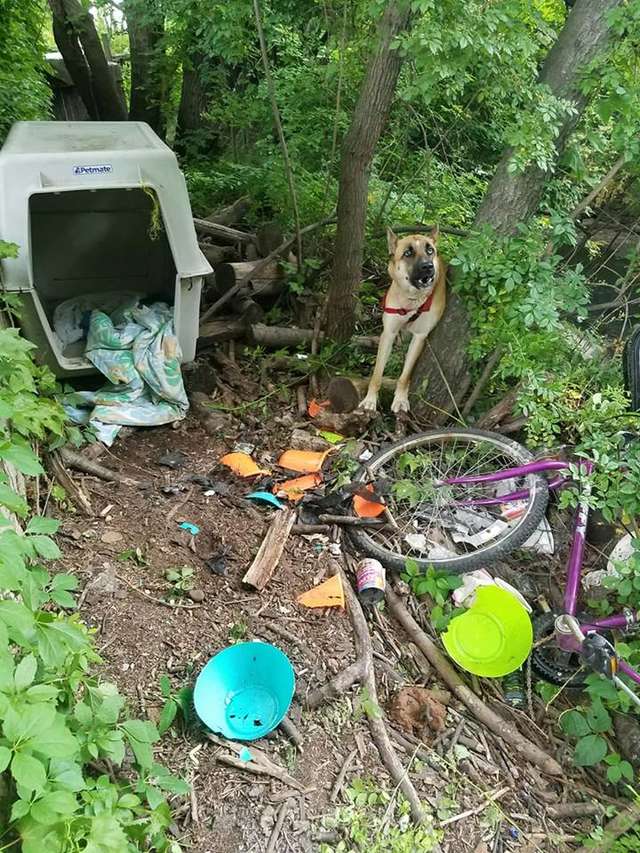 Alex made his way over there and asked around the apartment complex for any information on the dog, but no one would help. Nobody wanted to come out and say whose dog it was. They didn’t want to get involved.

The German Shepherd was tethered to a tree by a thick cable which had wrapped tightly around the dog’s leg. She was sitting in trash with only a crate and some empty bowls. 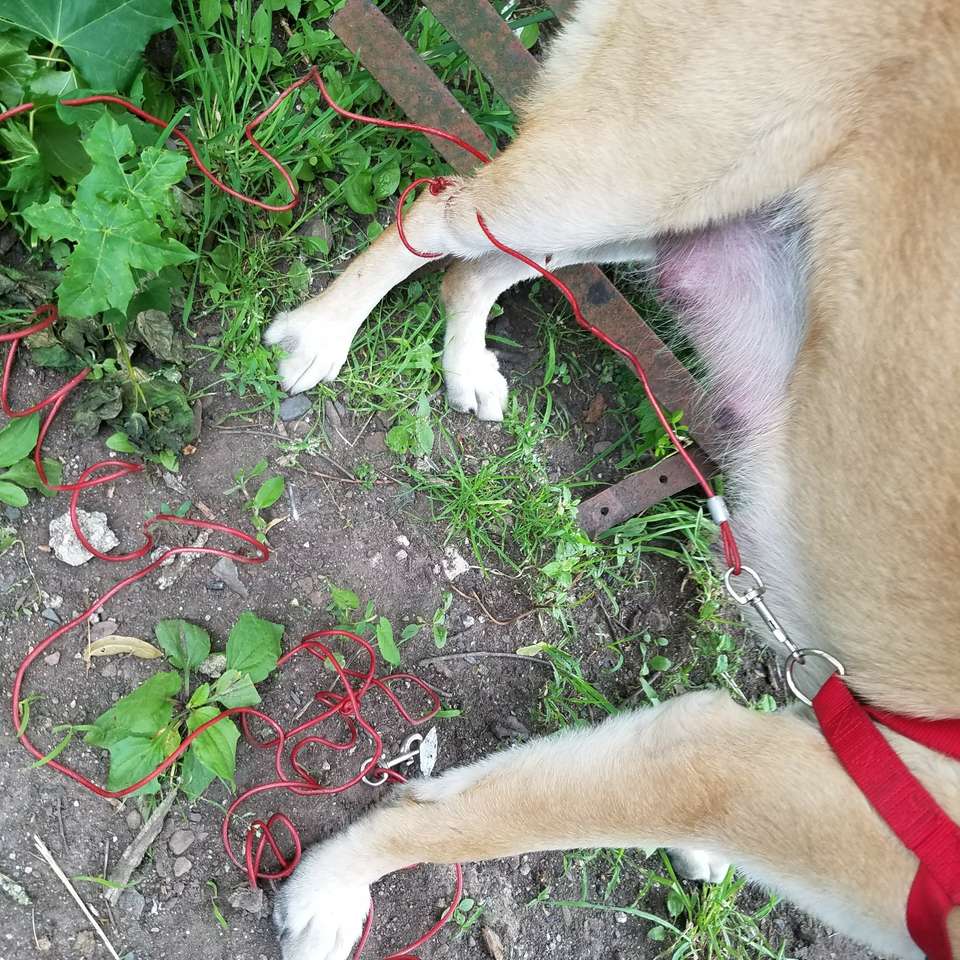 Alex approached and realized just how tightly the cable was wrapped around her leg. If it had been another day or so, she probably would have ended up having to have the leg removed. 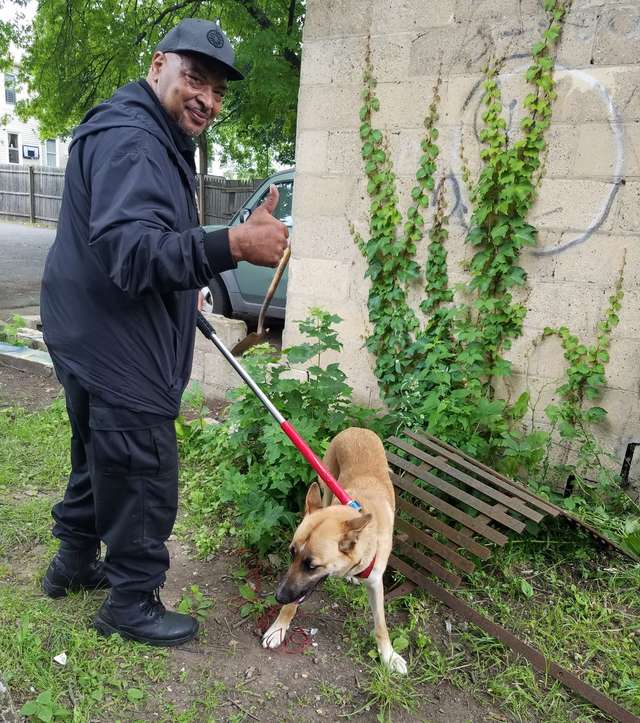 Alex worked slowly to gain the dog’s trust and put a snare around her neck to hold her while he removed the cord. He tossed out the crate and bowls to discourage people from dumping a dog there ever again.

The dog was a little hesitant at first, but she quickly calmed down as if she realized the man was there to help. By the time Alex got her back to an animal shelter in Newark, the German Shepherd was like a whole new dog. 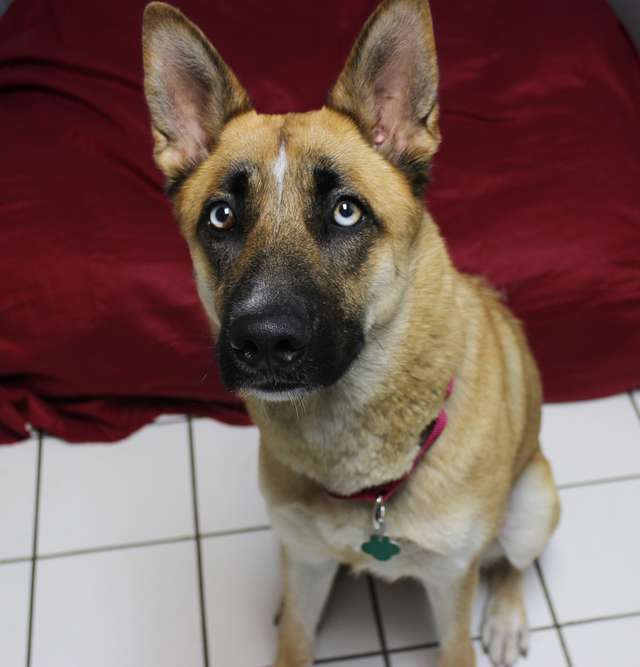 She was named Genesis to signify a new beginning and was examined and given plenty of food and water. She was transferred to the Associated Humane Popcorn Park Shelter where workers could tell the dog hadn’t had the easiest life, even before being abandoned. They said Genesis had been used for breeding and then tossed aside when she was no longer needed.

“It’s obvious that Genesis has been bred in the past and likely made her owner a great deal of money with her adorable puppies, yet this is how she was re-paid. That is all a thing of the past now, as we will help her to put her terrible past out of her mind and focus on her future,” the shelter said on Facebook.

Despite everything, Genesis loves people and is the sweetest girl. In fact, it didn’t take long for her to win over a family; just a few weeks after her rescue, Genesis was adopted and began settling in to her new loving home! 🙂