Maggie, a rescued Golden Retriever adopted by Ed Rendell while he was Pennsylvania governor, died Friday. 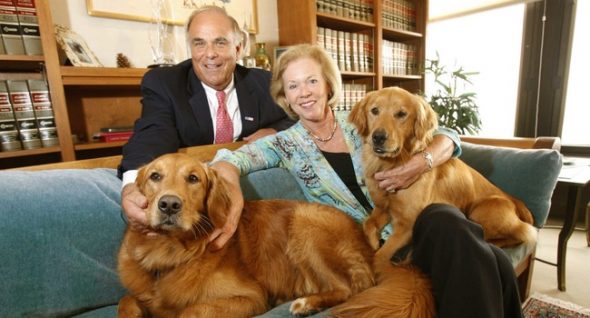 Rendell posted an announcement to his Facebook page, with touching observations about Maggie and dogs in general.

When Rendell separated from his wife in 2011, he wrote, Maggie “was my rock, my constant companion.”

“There were many a night that Maggie and I sat on the couch together sharing a pizza and watching baseball, basketball, football or Love Actually (Maggie saw that at least 8 or 9 times). The first couple of years were, as you would expect, very difficult for me but Maggie got me through it,” he wrote.

Rendell adopted Maggie in 2007. A breeder dog on an Amish farm, she’d lived her first two-and-a-half years in a rabbit hutch. She was sold to a rescue following the birth of a stillborn litter.

The group knew the governor had recently lost another golden retriever, Mandy, and contacted him.

“We met Maggie shortly thereafter with our dog Ginger and we saw a scrawny, 42-pound golden whose growth had been stunted by living in the rabbit hutch. But Maggie was remarkable. She wasn’t scared from her experience, she wasn’t bitter she wasn’t angry,” he wrote.

Constituents were used to seeing Maggie and Ginger around the Governor’s mansion and at bill signings.

Ginger passed away back in 2015, Philly.com reported.

On Thursday night, Rendell brought Maggie to the vet after she’d experienced trouble breathing and had difficulty keeping her food down. X-rays revealed a mass in her lungs. Later, at the hospital at Penn Vet, she was found to have cancer in her liver, stomach and lungs.

On his Facebook post, Rendell wrote: “I lived on this earth for over 73 years and as a trained lawyer, the most persuasive empirical evidence I have found about the existence of God is that someone must have done something to create that special bond between dog and human. It exists for us with virtually no other animal and I can’t believe it was just an accident. If God did that, we thank Her but God made one mistake, she should have made the lifespan of humans and dogs the same so that we wouldn’t lose them so soon, so very very soon.”

Maggie is survived by her fur sibling, 7-year-old Royal, another breeder-dog rescue from an Amish farm. Rendell adopted him from the Delaware Valley Golden Retriever Rescue last year on the day after Christmas and wrote that Maggie was “a great mentor dog” for him.

Maggie “was a great mentor dog” for Royal, a 7-year-old breeder dog also from an Amish farm, he said.