When animals are separated from their biological families, the hope is always that they will end up with the best family for them.

A kitten trapped in a wall on the US Virgin Island of St. John was in a dire situation when she was found. She had been separated from her mom and was cold, hungry, and all alone. Thankfully, fate brought along the best cat daddy for her.

Mike Usher heard her faint cries while taking care of his uncle’s house. He spent six days looking for the kitten after hearing her mewing. He found her, cleaned her up, and fed her. Once they took a minute to look at each other, it was love at first sight.

Thus Gracie was brought into the Usher family.

Mike’s an active guy who loves hiking and swimming. He felt bad leaving his new little lady behind while he went on adventures, so he decided to train her to come along. He even taught her how to swim with him in the ocean. Now Gracie has her own Instagram with over 134,000 followers, and Mike shares her adventures with the world.

A kitten who found herself all alone and stuck in a wall ended up finding the perfect home by chance.

“While taking care of my uncles house down here, I swore I heard the faint cry of a baby kitten. After 6 days of intense searching I finally found her, tucked away, hidden all alone under thick vines on a wall outside his house, with no momma in sight,” Mike Usher shared on Instagram when he announced that he had become a “cat daddy.”

Mike nurtured the kitten, whom he named Gracie, back to her playful kitty self in a matter of days. He took her to a vet and watched her potty train herself. Mike felt bad that Gracie was left behind when he went on adventures, so he decided in a matter of days to train her to join him.

It began with swimming lessons. “Dad says I’m gonna like it. But I’m still not too sure about that,” says the post on Gracie’s own Instagram account. In the video, she looks apprehensive as the water laps at her feet, but then she enthusiastically starts swimming toward Mike.

Mike also took Gracie hiking, where she road along on his back. “First hike today! My owner thought he was being [clever] by letting me ride his shoulders,” the photo’s caption reads. “Are you kidding me, I got this sucka fooled, free rides for life!! This cat just got herself a human jazzy chair. Ballin!!” 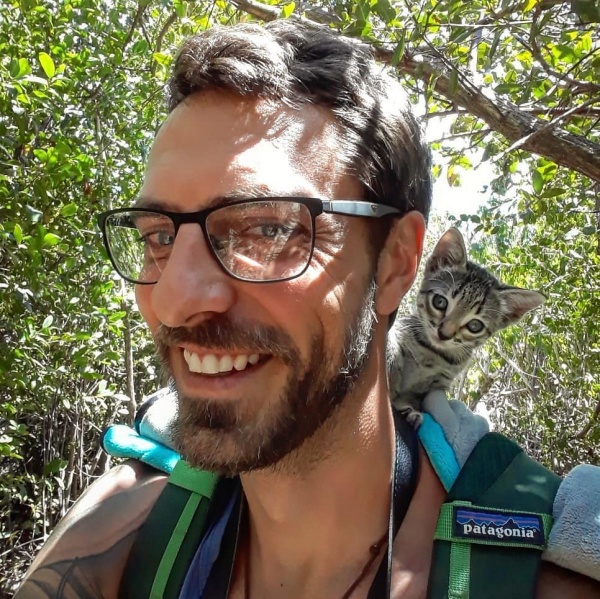 As the adventures became more frequent, Gracie grew to become a well-trained outdoor cat. She’s perfectly comfortable in any kind of environment as long as she has a soft blanket or yoga mat to lie on. 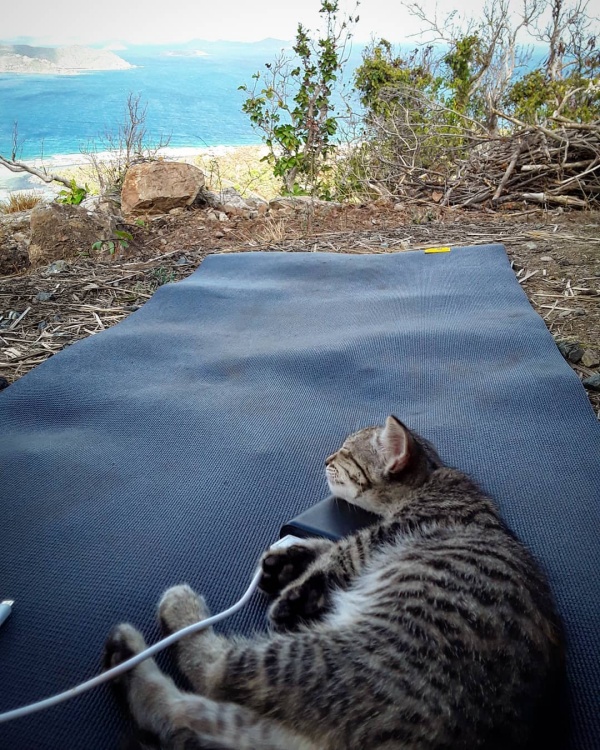 While Gracie is getting more comfortable in the water, her favorite place whether on land or at sea is on Mike. She takes advantage of her tiny stature and rides around on her favorite human, and it looks like she’s having a blast.

When they’re not swimming, Gracie likes to get in touch with her cat instincts. She likes to hunt and frolic around in the trees, getting out all of that kitten energy while never straying too far from Mike. 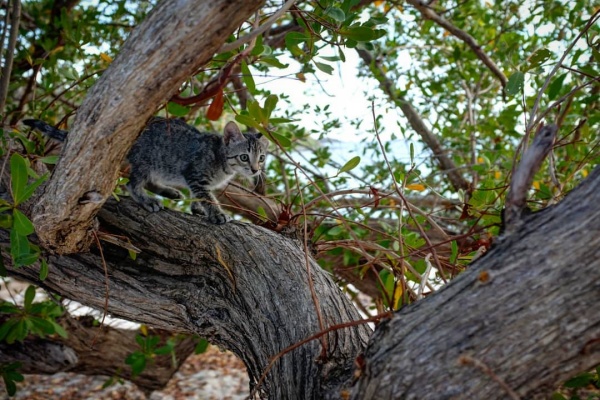 Part of teaching Gracie how to swim includes grooming her meticulously when they’re through. After her time in the ocean, she gets a freshwater bath, towel drying, and time to lie in the sun and frolic on land.

There has been only one little hiccup in their adventures so far. She contracted giardia and coccidia from drinking water on the island, which led to some very tough days with a very upset stomach for the little girl. 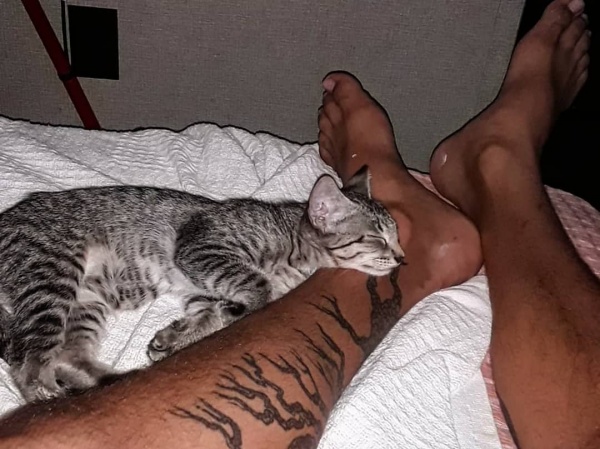 Gracie also had to take a break from her adventures once she was old enough to get spayed. The sweet little girl was bummed to not get her usual outside time, but Mike emphasized the importance of spaying and neutering cats, especially on an island with a lot of strays.

Once she was feeling better, Mike tested out a new way of exploring with Gracie. He walked her on a leash for a 1.5-mile hike, which she seemed to enjoy. She wasn’t as enthusiastic about the alternative, a cat backpack.

Gracie has developed quite the following during her short little life. Since Mike created Gracie’s own Instagram account, she’s amassed over 100,000 followers. They love watching her swim and hike and play.

As Gracie gets bigger, she’s getting more confident in her abilities, and it’s making her adventures all the more enjoyable. She manages to get all her exploration in while still listening to Mike and strengthening their bond. 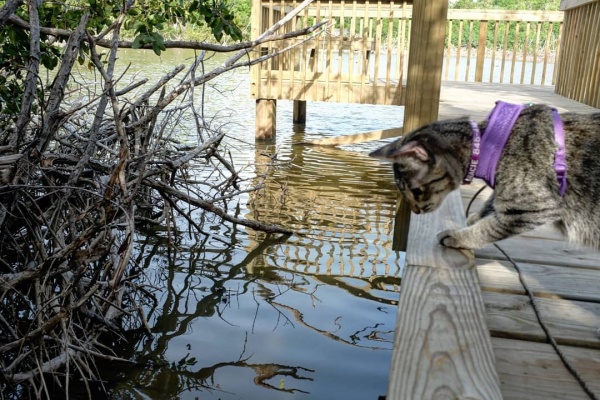 Gracie is now about 7 months old, and she’s just getting started. As she grows, her curiosity will as well. Luckily, she’s got the perfect cat dad in Mike. He’s willing to do whatever it takes to keep her safe and healthy during their adventures together.