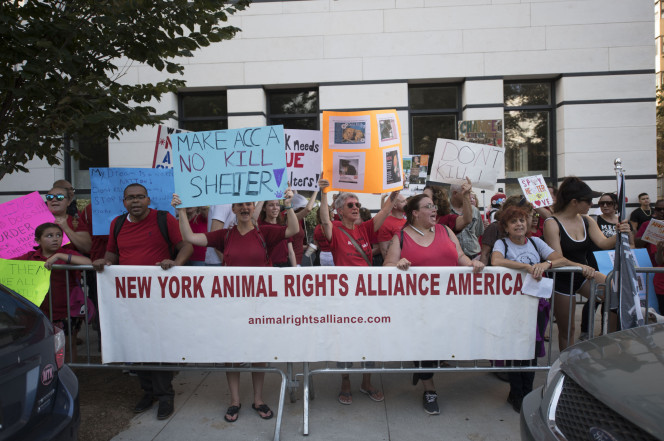 According to the New York Post, the Animal Care Centers have euthanized 2,110 cats and dogs through August across the three New York City shelters. The shelter claims 90 percent of all animals have been placed in homes.

Kate Rivello, founder at New York Animal Rights Alliance America and organizer of the event, continues to advocate for “a proven no-kill organization. We’re at at turning point where the awareness is there …”  Kate’s Facebook page explained:

“After seven years of protesting, our most important protest, the First March in History from NY ACC to the Mayor’s Gracie Mansion, garnered the most provocative truth-telling statement yet: ‘The NY ACC kills healthy animals and lies about,’” Kate Riviello the march’s organizer stated.

One of the most controversial issues includes the time period given to dogs and cats scheduled to be euthanized each day. According to the New York City Animal Care Centers, the “At Risk Online” dogs and cats have less than 18 hours to be placed with approved organizations or adopted if deemed publicly available.

“Thank you for your interest in adopting from Animal Care & Control of NYC.  Our At Risk List is posted each day at 6:00 p.m. and remains viewable until 12:00 noon the following day.”

Euthanasia for the listed animals begin 1:00 the following day. Individuals and rescue groups often scramble trying to find suitable placement for those at risk. Tragically, it doesn’t always work since adoptions and foster arrangements can often take a longer period of time.

During the rally, some shelter volunteers blasted the marchers stating the rally discourages adoptions.  Many volunteers for the city shelters spend endless hours helping as do staff members. Rescue organizations are able to get extensions when working to save dogs and cats already on the list, and it’s not a “cut and dry” death sentence as the clock strikes the end of the waiting period. There just needs to be more work done, and protesters like the Guardian Angels and Kate Riviello are the people speaking out for those who have no voices.