Guinea Fowl are usually reared like chickens, but this one decided to take on a new role – that of “sheep dog”.

Guinea Dog is a sheep-wrangling bird that’s become a viral sensation after a video of him herding sheep alongside his buddy, a Kelpie dog named Jess was posted online.

Guinea Dog lives on a farm in Australia and belongs to brother and sister Meg and Scott Jewell in Finley, New South Wales.

Guinea Dog started life off normally enough, but the Jewells thought he had perished after he and his fellow keets were attacked by a fox. But they later found him with the farm’s sheep dogs. 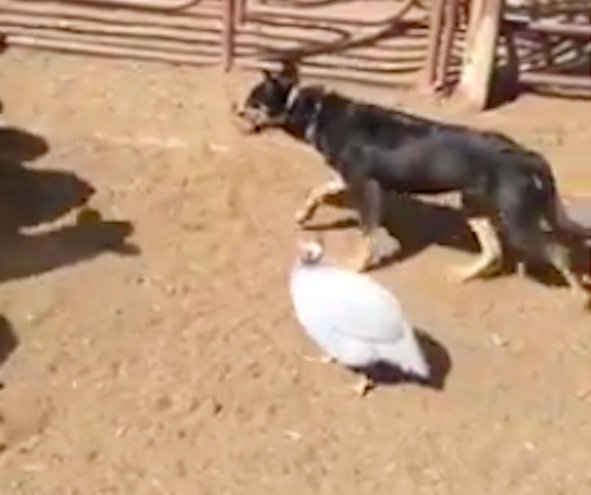 “He was one of four keets that we thought had all been lost to a fox but then eventually found him hanging around the dog’s kennels. From then on he attached himself to them and began mimicking their behaviour,” Scott told The Weekly Times.

Guinea Dog will round up sheep just like the dogs and even will jump up and peck the rears of the sheep to keep them in line! The only drawback, the family says, is that he doesn’t listen to commands. Watch Guinea Dog in action in the video below!

“They live naturally in flocks so has probably bonded with the kelpie and so is protecting his flock,” one person commented after seeing the video.

Guinea Dog appears to have found himself an unlikely flock, but the dogs don’t seem to mind.

Meg said, “We think guinea sort of imprinted on the dogs. You sometimes catch him pecking at their hair and they don’t even flinch. I’m not completely sure he knows what he’s doing, but he definitely knows what a sheep is.”

Share Guinea Dog’s story with your friends and family!